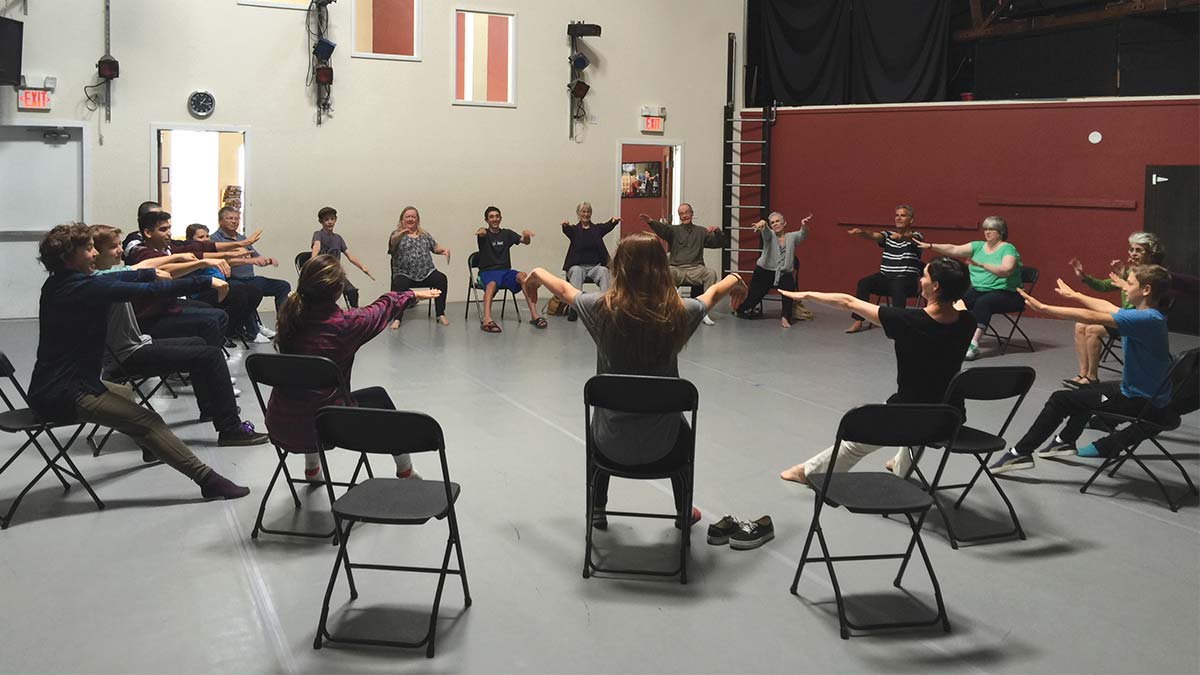 “Life may not be the party we hoped for, but while we’re here we should dance,” reads the tag on my tea bag, peeking out, coincidentally, from behind a computer screen displaying Parkinson’s symptoms and information about Motion Pacific dance studio’s Dance for Parkinson’s program.
For people with Parkinson’s disease, like Rob Elmore, 66, the quote is almost too fitting—diagnosed with the disease eight years ago, Elmore finds a liberating distraction in the Dance for Parkinson’s classes.
“The shakes usually come up in the afternoon, and I find that during class I can bypass them a little bit. They’re still sort of there in the background, but I can move more normally,” says Elmore, who says he’s otherwise usually lying down during the afternoon shake time. “With the dance and the music I can actually do something which is interesting and fun and use my muscles in a way that I don’t normally use my muscles. It’s a relief on those days and it’s a reassurance that all is not lost.”
Motion Pacific’s classes are taught by professional contemporary dancers and trained Dance for Parkinson’s teachers Damara Vita Ganley, Molly Katzman and Katie Griffin. They sit in a circle and start with chair exercises, focusing on balance and coordination, says instructor Ganley.
By the time that the class progresses to movement across the floor, Elmore is striding, he says. For Elmore, that’s the biggest surprise.
“I’m actually moving freely across the floor,” says Elmore. “The program that [Ganley] is leading just awakens your muscles and gets them to do things you didn’t know they could do.”
Parkinson’s disease affects control over a person’s motor skills, like balancing muscles, forcing people with Parkinson’s to consciously think about physical motions and functions that, for most, are automatic—making what used to be routine incredibly difficult, says Elmore.
“I have to use a part of my brain to control something I would otherwise do unconsciously—like when I cut something with a sharp knife, I have to watch consciously rather than unconsciously that I don’t slice through my finger instead of an onion, for example,” says Elmore.
According to the Parkinson’s Disease Foundation, up to 60 percent of people with the disease experience mild to moderate depressive symptoms. Parkinson’s affects parts of the brain that control mood, including the area that produces serotonin and the frontal lobe, so it’s possible that the disease itself also causes the depression.
Dancing, according to several studies conducted over the past decade, can help with the psychological and the neurological symptoms. A 2015 study published in the Journal of Neural Transmission found that “Dance training employs strategic methods such as visual focus, rhythm, imagery, proprioceptive input, and imitation of discrete parts of dance sequences to gain superior control of posture, balance, and movement.”
It works, says Elmore.
“It’s always a challenge when you’re shaking a little bit to try and do something else besides shaking,” he says. “The class gets you focusing on something else beyond the shakes.”
Motion board member and instructor Ganley has been teaching Parkinson’s dance classes since 2008 and says that each class is modified for who is in the room, and where they are at that moment.
“For instance, if someone’s only able to unfurl their hand that day—finding a great feeling of poetry in that gesture, a virtuosity of experience, that kind of blossoming of a hand opening—that’s just as important as someone running and jumping across the room,” says Ganley.
With a sponsorship from Tony Walker, owner of in-home senior care service ComForCare, Motion was able to launch the classes with live accompaniment for not only people with Parkinson’s but also their caretakers and family members—all for free.
“There are so many costs that are associated with living with Parkinson’s, so we wanted it to be open and available for anyone and everyone,” says Ganley. “This offers a way for people who are not generally included in the dance population to be dancers and be part of the dance community.”
“For me, art—and in particular, dance—is a way to find meaning and question what it means to be human,” says Ganley. “It’s in these Dance for Parkinson’s classes that I really see a true connection to strength and vulnerability, the power of living in the moment.”
After all, living with Parkinson’s is no party, so you might as well dance.