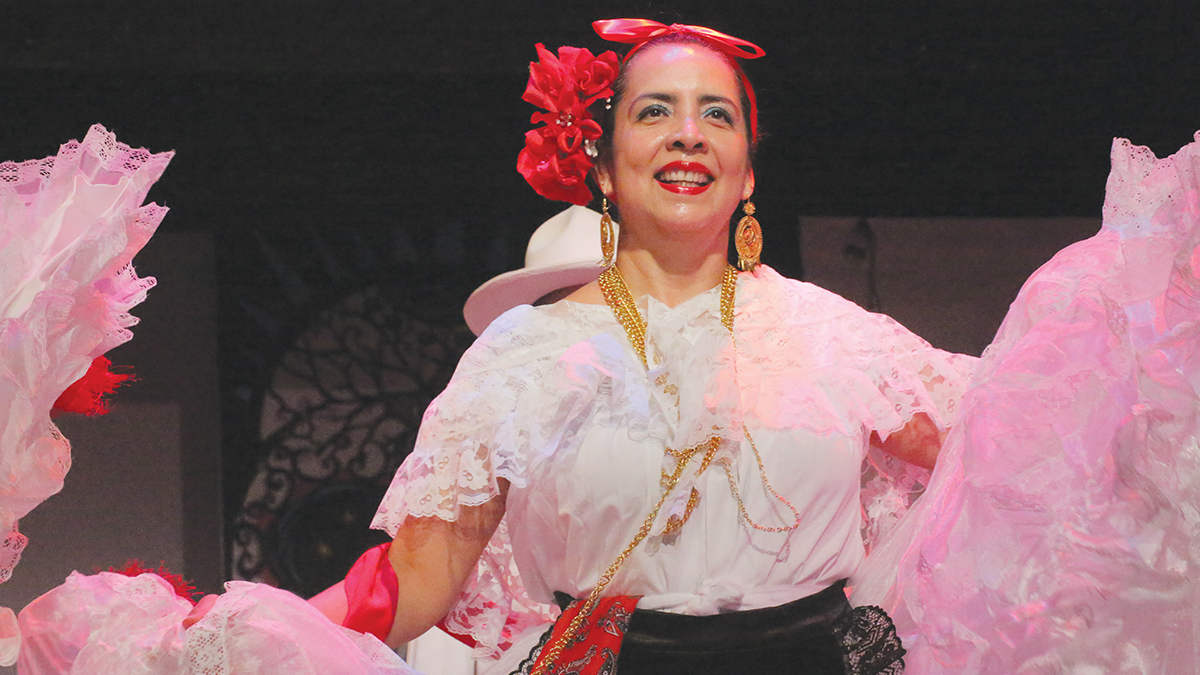 On an otherwise quiet and serene Sunday afternoon, an assertive and rapid-fire polyrhythm spills out onto Watsonville’s City Plaza.

Too explosive to be drumming, the sound is coming from the plaza’s northeast side. There, inside the open doors of a dance studio on Cabrillo College’s small Watsonville campus, about two dozen people are stomping in staccato precision on a hardwood floor with their chunky-heeled folklorico dance shoes.

This is the unmistakable and distinctive sound of Esperanza del Valle.

For close to 40 years, Esperanza has been giving audiences in the Monterey Bay area the kind of tradition-grounded ethnic dance performances usually only found in major cities like Los Angeles or Mexico City.

On this particular Sunday, the troupe—even in numbers of men and women—is taking instruction from Daniel del Valle Hernandez, who traveled to Watsonville from his home in Veracruz, Mexico, where he is the artistic director of the Ballet Folklorico of Puerto Veracruz. The dancers stomp in unison, the women holding their arms out parallel to the floor but bent at the elbow, ready to hold up their voluminous skirts during the performance.

On Friday, Nov. 1—All Saints Day—Esperanza Del Valle will host a free performance outdoors at the Watsonville Plaza, followed by a five-performance, three-day engagement at El Teatro Campesino’s Playhouse in San Juan Bautista.

The weekend slate of performances will celebrate the Mexican observance of Día de los Muertos (Day of the Dead). But Esperanza del Valle is also using the occasion to take a deep dive into the remarkably rich dance subculture of the state of Veracruz and the region of Huasteca on the Caribbean coast of Mexico.

The traditional dance of the region is known as son jarocho, and if that sounds unfamiliar and distant, consider the case of “La Bamba.” Long before Los Lobos recorded it—long before even Ritchie Valens sang it—“La Bamba” was a prime example of the son jarocho style, and is still considered one of the classics of the tradition.

The El Teatro shows will feature Esperanza’s take on the traditional “La Bamba,” as well as the Day of the Dead performance Danza de los Viejos.

“That one is about disguising ourselves as people who have passed on,” says Esperanza’s co-founder and artistic director Janet Johns. “We’re wearing these masks made in the Huasteca region, all hand carved and made of cedar. The idea is to dress like people who have died and dance as they would have danced.”

Esperanza del Valle has maintained a relationship with the dance masters of Veracruz for years. In years past, the group has hosted choreographer Mario Cabrera, a widely admired popularizer of son jarocho. “I think of him as the Mexican Fred Astaire,” Johns says. “There are bronze statues of him in Veracruz. He’s like an arts treasure in Mexico. He couldn’t come this year; he’s been ill. But Daniel (del Valle Hernandez) is carrying on the legacy.”

The Día de los Muertos performances will feature other styles from Veracruz, which has a particularly rich cultural legacy thanks to the melding of indigenous, Cuban and Spanish influences. Perhaps most central to the show’s theme is Esperanza’s own original “choreo-drama” called Macaria, based on a traditional Mexican story about a poor woman who is visited by angels and devils after she takes a turkey from a Día de los Muertos altar.

Locally, Esperanza is known for its dress as much as its dancing—most notably, the brightly colored full skirts worn by female dancers. The new performance will feature no less than eight costume changes.

Formed in 1980 with six couples, Esperanza del Valle has survived on a shoestring. Staffed with volunteers, it spends what little money it raises on bringing in dance professionals from Mexico and researching folklórico traditions. Johns, who teaches folklórico dance at Cabrillo, says her dance company is kept alive by new generations.

“Right now, we span from 20 to 60 (years old),” she says. “My son is in his twenties, and now his generation is coming into the group. It’s wonderful to have the older, veteran dancers. But luckily, we keep having these new generations of dancers coming up, too.”

Johns points to 2020 as a watershed year for Esperanza del Valle. For its 40th anniversary season, the dance troupe hopes to be more visible than ever on the local performance calendar.

“I want to bring in three master teachers, from three different states in Mexico, and have three different open studios so that the community can come in, maybe for a lecture, some photographs, to learn about the dance,” says Johns. “And, of course, we’ll have some gala performances too.”