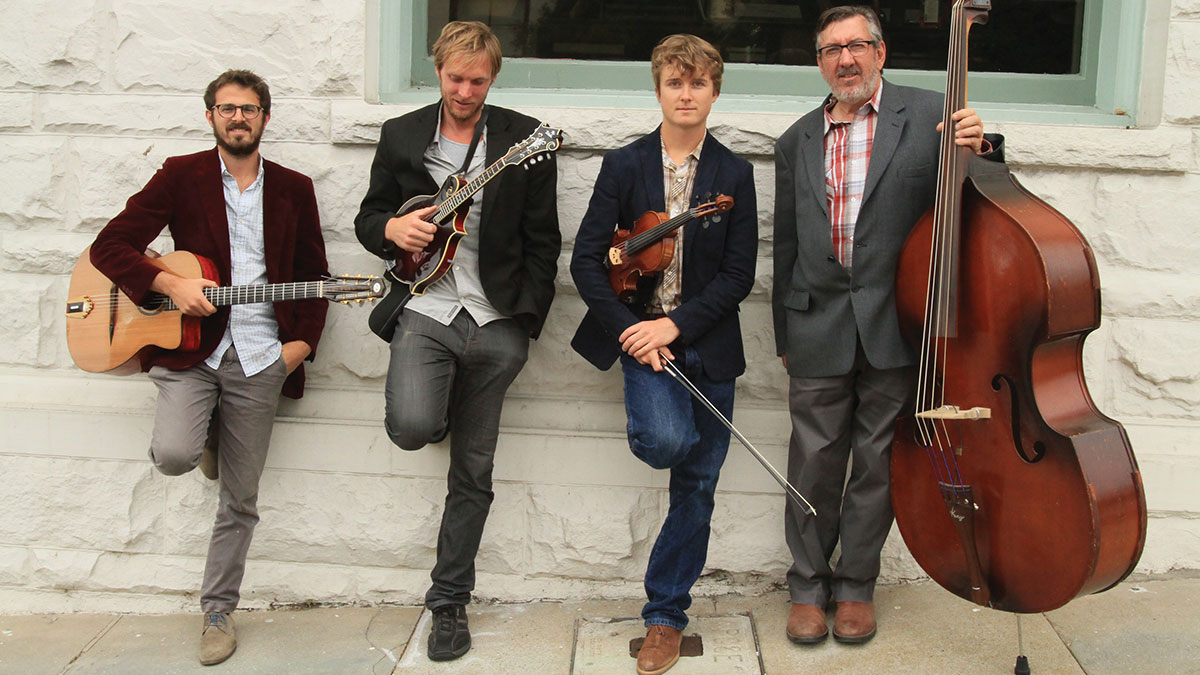 One look at the Monterey-based Dave Holodiloff Band, and you’d likely assume they play strictly bluegrass.

“I love all types of music. We play all types of events, whether it’s a dance thing or a sit-down listening thing,” Holodiloff says. “In this area, I feel like we have listeners that are into a variety of things.”

For Holodiloff’s most recent album, Balkan String Projekt—his ninth album under the Dave Holodiloff Band moniker—he explores the traditional music of Bulgaria and Romania (a little bit Turkish, Serbian and Moldovan), while giving it a California twist. He plays the music on what would be more traditionally considered bluegrass instruments, and with his easy-going vibe. Traditional Balkan music is very old, and played on instruments like bagpipes that can slide into eerie quarter-notes, unlike the 12-note fretted mandolin.

“I didn’t grow up playing this music. It challenges me as a player, learning this Balkan music,” Holodiloff says. “Now I’m putting it back into Celtic and my original music. When you learn one style, that helps you grow and come back fresh in different areas.”

Before going solo, Holodiloff played in a variety of bands, like a bluegrass band and a gypsy jazz band. He enjoyed playing in these bands, but found that something was missing for him creatively; they were mostly preserving the traditions of these styles of music, as opposed to building on them and incorporating other genres.

“I think just out of necessity I wanted to grow and expand and include all styles,” Holodiloff says. “I feel like my calling is to take the mandolin and the genres and push them into a new direction. You play with different musicians, and you all bring something different and unique to the table, and you put it together like a mish-mosh.”

Holodiloff’s life as a solo artist began approximately seven years ago. He kicked it off with the album Traditional Duets. He released seven more diverse albums over the course of the next 2.5 years. He played solo, but he was always on the lookout for people that he could play with. It’s led to some interesting tours, like in Peru with his friend Peter Mellinger, Italy with Ciosi, and Israel with Isaac Misri.

Balkan String Projekt was mostly possible because he met Misri three-and-a-half years ago, when Misri’s Hungarian band Het Hat Club played Monterey. Misri ended up staying in Monterey with Holodiloff for six months. They listened to a lot of Balkan music and did plenty of jamming. Together they worked on the album with Bill Sullivan (upright bass), Peter Mellinger (violin) and Michael Martinez (piano). Holodiloff is planning a new album tentatively scheduled for the spring of 2020, which will have more old gypsy vocal songs and traditional Balkan instrumental dance tunes, with his own twist.

“I’m super blessed to play with the best musicians around,” Holodiloff says. “What we play is maybe not as important as the energy we bring, because it might depend on the night. Whatever vibe is there, whatever particular ensemble of musicians I have that night, it’s a blessing every time we get to play music for people”

There are so many styles that Holodiloff is interested in that he holds several annual themed shows, like a St. Patrick’s Day Celtic concert and a Jerry Garcia birthday bash. But there’s also the Dave Holodiloff Band, which plays all the styles—and that is precisely the version of the band that will be playing at Michael’s on Jan 2.

“Music is a language, and there’s all these dialects,” Holodiloff says. “We tend to improvise and play off the crowd. It’s not just one thing. We do specific [genre] shows throughout the year, but not this time. A day-after-New-Year’s celebration. Start the new year off right.”