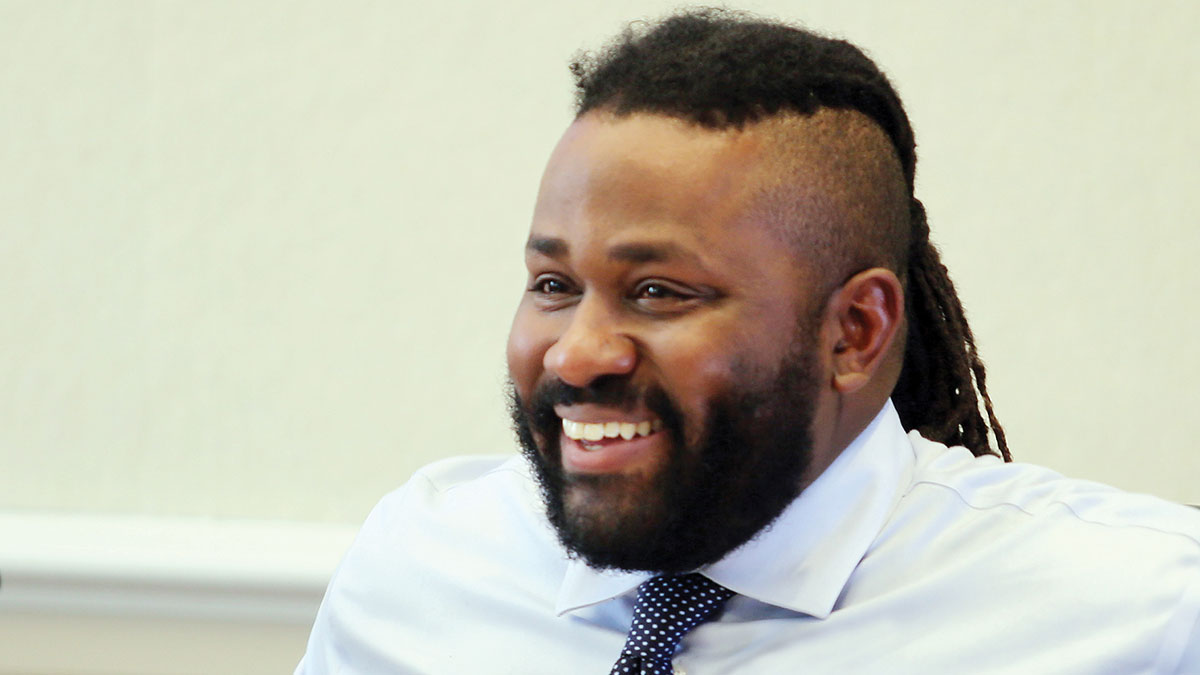 Justin Cummings has made history as Santa Cruz’s first African-American male mayor. At 36 years old, he’s also the city’s first millennial mayor. He may even be the first punk-rock-loving mayor.

GT spoke with Cummings about the library project, what the recall is doing to Santa Cruz, his first year on City Council, and the year ahead.

Last year was your first on the council, and you were named vice mayor, which is uncommon, especially for a newcomer. What did you learn?

JUSTIN CUMMINGS: What I learned more than anything was really a better understanding of the process for getting things accomplished. There was this notion going around when I was running that you just need four votes to get anything done. And while that might be sometimes true for getting something passed, you really have to think about implementation and community engagement.

Depending on the issue, if you bring it forward too quickly without engaging the public, it can backfire. Or, at the very least, you won’t get as much support. One example is when it was proposed to take down the “No Parking” signs on Delaware Avenue. There was no engagement with the residents, the state parks or the university. So when that came out, although it was clear it could be implemented safely, a lot of community members were caught off-guard and were upset. They didn’t know what was going on. Having that engagement is incredibly important, especially with issues that could be controversial.

You’re the first African-American male mayor in Santa Cruz. What does that mean to you?

We live in a community that demonstrates it cares about inclusivity. We had two African-American men and one lesbian elected at the same time in 2018, and those were all firsts. I think it’s telling that our community looks past race, age, gender, and sexual orientation and really focuses on who the person is and what their values are.

There’s an effort underway to recall two councilmembers. What effect is that having on Santa Cruz?

It’s further dividing our community, which is unfortunate. When the signature campaign was happening, I was informed by many people about the misinformation being circulated around Drew [Glover] and Chris [Krohn]. There were also physical altercations between canvassers and the general public.

You made the motion to certify the signature results to recall Councilmembers Glover and Krohn—who’ve often been allies to you—and put it on the ballot. When Councilmember Cynthia Mathews seconded your motion, she remarked that it must have been a difficult decision for you. How did you feel in that moment, and how did you decide what to do?

I really thought about our responsibility as councilmembers. For example, I worked on the rent control campaign and got signatures for it. If we had presented that to the city with enough signatures to put on the ballot and they hadn’t done that, it would’ve been troubling and disrespectful towards the community. If that would’ve happened, I think many in town would’ve been outraged.

The conduct of City Council was a major headline last year. How should council members treat each other and city staff?

I continue to try to conduct myself in a way that treats our staff, community and my other council members with respect. I don’t have to agree with them, and we can respectfully disagree. We all represent different people within our community.

We’re still waiting on more information about the library and the possible parking structure project. Generally speaking, how should the city should proceed?

We’re now sending out a request for proposals to figure out what it would cost for a mixed-use project. I think we really need to figure out what that would look like. I hear arguments on both sides. A lot of people who voted for the measure expressed they were under the impression the funds would go towards renovating the library—although there is language in the ballot about potentially building another site.

People are really upset about the idea of [building] a parking garage and library, but we’re also exploring the idea of affordable housing and trying to combine them, right? So it could be a library with housing and parking, but it really depends on what this option looks like. We’re getting information on what this second option would cost, its feasibility, and comparing the two.

Jayson Architecture gave their final presentation on Dec. 13 on what it would cost to renovate. The conclusion is that most of what would be done wouldn’t be adequate. There would need to be more funding if we were to fully renovate to where it would be a well-designed civic institution. That’s part of the reason why we want to explore more options.

In 2019, the council greatly restricted the requirements for affordable housing in new developments without doing an economic analysis over concerns from the Planning Commission. How do we know this won’t slow development in the midst of a serious housing shortage, making the housing crisis worse?

One of those things [that I want to focus on at the start of the year] is to form an Affordable Housing Subcommittee, which will be more or less like a task force. It will identify people in the community who are stakeholders in development circles and part of the task force will explore “How do we make 20% work?” When we increased our inclusionary rate to 20%, people argued that raising it from 15% could stop housing from being developed. What I’m saying is that 20% has worked in other communities, so let’s form this committee and see what we have to do to increase the incentive for developers. Is there anything else we can do? When we go out to do an economic feasibility study, it should focus on how we make 20% inclusionary work.

One other thing I want to add is that it’s very important to note we need low- and very- low-income housing. However, we also need moderately affordable housing. We don’t want to turn Santa Cruz into a community of just the very rich and the very poor with nothing in between. Many of us fall into that middle-class category, and there’s really not a whole lot in Santa Cruz for us.

I think it’s great we’re building low-income and affordable housing for people. However, to be able to access that housing, you have to be making under a certain amount to qualify. We need housing for people right above that line as well. Many middle class people—teachers, medical staff, university staff, people in the service industry—we don’t want to train them not to excel and be constrained by caps that we place on housing.

How do you plan to approach homeless issues this year?

We are working on trying to get a new shelter and navigation center. That’s currently a work in progress. It’s going to take time. I’m interested in exploring a couple options: one is a group called Recovery Cafe, who work out of San Jose. I received a presentation on the work they do, and I’m hoping to have them come and present to the community. They work with people who are facing addiction and have a really good day program that has shown to be successful.

Last Friday, Ryan Coonerty and some of his staff, along with [Bruce] McPherson, myself and the city manager—we went to San Mateo to see a program out there called Life Works. They’ve been really successful with getting people housed and having a safe, clean program. We’re gonna see if they can give a presentation and see if we can work with them, learn their approaches and implement them here … The biggest thing we need is for the community to be open to new ideas. Even if we have the money, we have to find somewhere to put it—whether it’s day services, long-term shelter, etc.

I also want to stress that we have to work with the county, and we need them to be open to new ideas, too. Even though we’re the county seat and getting a large proportion of the services, we have to spread them throughout the county as well. Homelessness falls under public health. Public health falls under the responsibility of the county. A lot of people yell at the City Council to do something about homelessness, when it primarily falls under the county. We need to have a good working relationship with them, and people also need to bring their message to them.

I hear a lot of talk when I’m bartending about how, “Now that Justin’s mayor, things are going to be different.” Is that true?

The biggest thing I want people to know is that we are trying to do the best with the resources we have. We’re not going to be able to do everything we want, because everything comes with a cost, or we might not have the technical resources we need. And for some things, we don’t have the technology to do it. But we try to do what we can with what we have to keep moving in a progressive direction.

When I was a kid growing up in the suburbs of Chicago, I really wanted to play the guitar, and even though I couldn’t afford to buy the nicest guitar with the nicest amp and the nicest setup, I got what I could. I utilized that tool, practiced and worked hard on saving so when the time came to upgrade, I could. But the ultimate goal was to play guitar. As a community, when trying to accomplish things, we need to ask what we can get done with what we already have. Let’s do that for now, while keeping our eyes set on how we can improve for the future.

Do you think your background in punk and metal affects your willingness to work with new ideas?

Yes! For me, the punk-rock scene was always about questioning authority and trying to do your own thing. Question for change. One of the things about punk rock that always resonated with me the most is it’s about community and respect within that community. If someone goes down, we help them back up. We don’t care about gender, color of your skin or what you look like. We care about if you’re a good, solid person—and if so, let’s mosh!