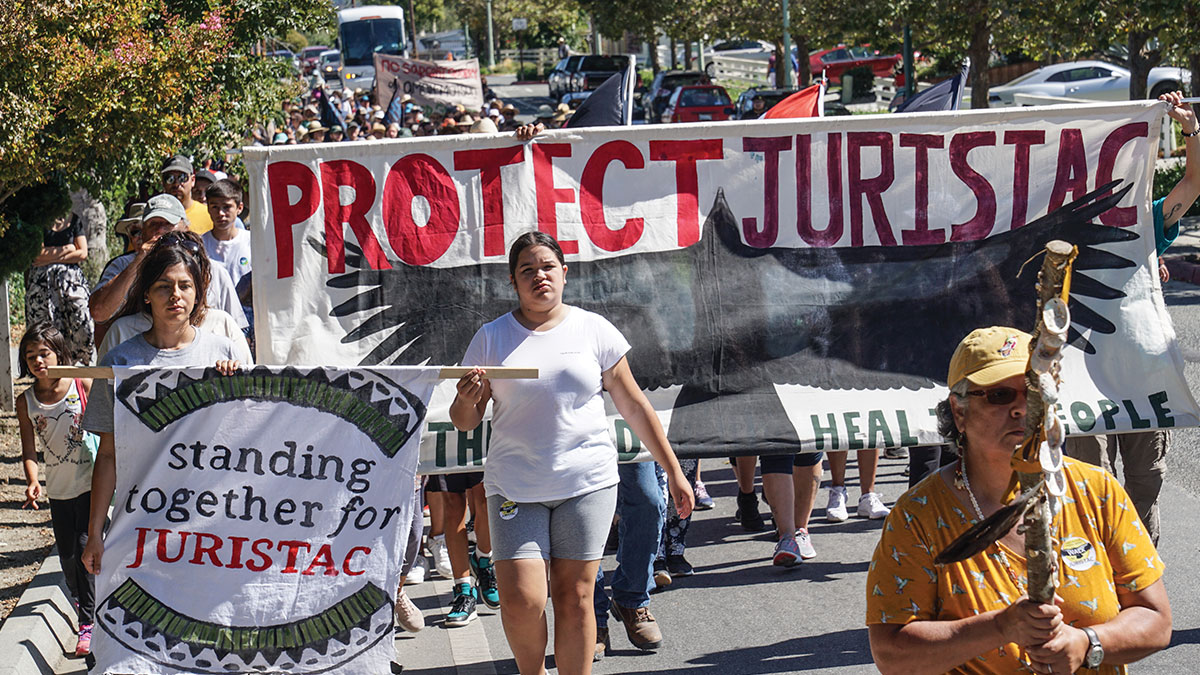 Just past noon one weekend in September, hundreds of people gather in prayer. This isn’t a typical Sunday church service.

The congregation has come to the end of a 5-mile march, a pilgrimage that began at Mission San Juan Bautista in San Benito County and ended at a place now known as Sargent Ranch, 6400 acres of land that straddle Santa Cruz County’s easternmost border with Santa Clara County.

Here, at the foot of the lowland slopes and iconic golden hills east of Aromas, Mt. Madonna and the Pescadero Creek and just a few miles south of urbanizing Gilroy, they begin to pray.

Ceremonies such as these were once common. Thousands of years ago, long before European settlers arrived in California, the Amah Mutsun—a local indigenous tribe—held sacred gatherings on the site they call “Juristac,” meaning “place of the big head.”

At their peak, the Amah Mutsun lived in small villages from the San Francisco Bay Area down to  Monterey. Juristac is considered a particularly special place—home of their spiritual leader, Kuksui, and a place where the tribal band hosted prayer ceremonies and healing rituals for more than 10,000 years. It is also currently the proposed site of a 320-acre, open-pit sand and gravel mine about 3000 feet over the Santa Cruz County line. The excavation will create a potential new local source for the grit coveted by the cheerleaders of Silicon Valley’s construction boom.

It was this prospect that compelled more than 100 tribal members—along with hundreds of their supporters from community and environmental organizations—to attend the early September prayer walk.

“This is a major issue for our tribe,” says Valentin Lopez, chairman of the Amah Mutsun Tribal Band. “These developers plan on tearing down and monetizing our most sacred site, and so we’re fighting to stop that.”

Approval of the Sargent Quarry Project is contingent on a number of pending factors. There’s an ethnographic study taking place, along with a draft environmental impact report underway and expected out early this year.

Environmental groups have come out against the proposed mine because of the adverse impact it would likely have on iconic species, such as the American badger, puma and California red-legged frog.

After the draft environmental review is issued, opposition groups will likely have somewhere between 45 to 75 days to submit questions or objections to the Santa Clara County Planning Commission, which will vote on the mine.

Lopez knows that this is merely the latest skirmish in a battle that he and his contemporaries have fought for decades—and the latest chapter in a war that his ancestors waged for centuries.

For nearly 20 years, Irenne Zwierlein—considered an outsider by the tribal majority—has nonetheless played an outsized role in the Amah Mutsun’s ongoing campaign for federal recognition and in the tribe’s claim to the Sargent Ranch property.

The 74-year-old Woodside resident, who didn’t respond to requests for comment, has made no public effort to take part in any of the tribe’s events and activities, and has yet to conclusively prove her Native American heritage. Even after the Bureau of Indian Affairs affirmed in 2007 that Zwierlein forged documents in an attempt to position herself as the Amah Mutsun’s rightful leader, she managed to convince the agency to prioritize her petition over that of popularly recognized tribal Chairman Lopez, a fellow septuagenarian who for the past 16 years has served as the face of the tribe.

Under Lopez’s leadership, the tribe has emphasized restoring a sense of community among the 500-plus Amah Mutsun members after generations of forced assimilation and trauma. For his part, Lopez says he hopes to see Sargent Ranch returned to the Amah Mutsun, or placed in the stewardship of an organization that shares his vision of maintaining a green, open space on this land.

Without a legal right to their ancestral turf, Lopez says the Amah Mutsun won’t be able to unilaterally say what can be done here. However, in the course of his time fighting for Juristac and other significant Amah Mutsun sites, Lopez has forged partnerships with open space districts, conservationists and private property owners who have helped him and his tribe uphold their mission of protecting land they hold sacred.

Zwierlein’s priorities, by contrast, seemingly depend almost entirely on the federal government’s affirmation of the tribe’s sovereignty to secure the rights to Sargent Ranch.

Fifteen years ago, La Jolla developer Wayne Pierce inked a development contract with Zwierlein, who promised to allow development on the land in exchange for a $21 million cultural center and homes for tribal members. The pact gave Pierce a way to bypass state and county anti-sprawl zoning and brought Zwierlein some powerful allies.

Though Pierce’s blueprints for a “luxury gaming resort” surfaced online years after signing his covenant with Zwierlein, she has consistently denied advocating for a casino. But the potential profit windfall from Indian gaming cast doubt on Zwierlein’s motives.

The economy took a nosedive and set Pierce on a course that ended in bankruptcy and foreclosure on the La Jollan’s 85% stake in Sargent Ranch.

The proposed quarry has now overtaken the sidelined casino plans as the immediate threat to Juristac.

While Lopez has been dealt many defeats and setbacks in his decades-long fight, he comes into the battle for Juristac on the heels of a partial win.

With the help of the Midpeninsula Regional Open Space District—a special district managing 26 open space preserves around the Bay Area—Lopez managed to reclaim a small piece of one of his people’s most sacred sites, the summit of Mount Umunhum, which had been cordoned off to the public for decades.

In 2009, efforts to clean the space up received $3.2 million, and Midpen got to work, removing 3,000 cubic yards of hazardous material from the mountain and the summit’s Cold War-era military facility, which still includes a 50-foot tower that was recently granted protection and historical status, much to Lopez’s dismay.

The group re-contoured the the site and constructed a trail between Mount Umunhum and its neighbor, Bald Mountain. After almost 60 years, it opened to visitors once again.

The 3,489-foot peak, one of the highest surrounding the valley, is now the home of a permanent Amah Mutsun prayer circle, which was completed two years ago.

Umunhum can be loosely translated as “the place where hummingbird rests.” Today, the space, which is central to the tribe’s creation story, overlooks Silicon Valley and is marked with an informational plaque,m explaining the historical significance of Mount Umunhum for the Amah Mutsun tribe.

Over the past 250 years, Amah Mutsun history has been one marked by violence, destruction and genocide. The troubles began during the Mission period in the late 18th and early 19th centuries, when native populations were moved to compounds and lived in harsh conditions. During this time, 19,421 Indians died at Mission San Juan Bautista alone, and it’s estimated that the population of Californian Indians as a whole was reduced from 350,000 to 200,000.

The Mexican period, from 1822 to 1846, saw huge tracts of land granted to settlers, while the native population was maneuvered into debt-peonage, working lands that were taken from them. European diseases and poor living conditions contributed to the death of another 100,000 California Indians.

The American period, which began around 1850, was perhaps the worst. During this time, the already devastated population of native Californians experienced what might have been the worst slaughter of Indians in U.S. history. It’s estimated that the Indian population of California went from 150,000 before 1849 to fewer than 30,000 in 1870—an 80% loss in just 21 years.

Today, one of the most intractable challenges facing the Amah Mutsun is the reality that the United States government hasn’t officially recognized them as a tribe. This leaves them without the rights, benefits and legal status that come with federal recognition—protections which could have played a significant role in determining Juristac’s fate. Recognition gives a tribe and its members special rights, including sovereignty over their lands, self-governance and federal benefits, services and protections.

“I tell you, if we were Catholic or Muslim or Jewish or a Buddhist—if we were any other religion and this was known as a sacred site, they wouldn’t dare think of proposing a sand and gravel mine,” Lopez says. “But because we’re Native American, because we’re not federally recognized, it doesn’t matter.”

Lopez has successfully advocated for the Catholic Diocese of Monterey to issue a formal apology, which it gave in a 2013 ceremony of mass reconciliation for enslaving and killing the Amah Mutsun hundreds of years prior. He also helped forge a tribal land trust partnership with the Sempervirens Fund and a program through UCSC for the Amah Mutsun to reclaim ancient knowledge of environmental stewardship and native plants.

For the past decade, the tribe has held bimonthly meetings led by a psychiatrist and two psychologists, in which members delve into the trauma from a history of dislocation. All the while, he’s consistently convened members for holiday gatherings, basket-weaving seminars and other events to preserve cultural identity and meet one of the tests for tribal recognition.

Though Zwierlein has all but disappeared from public life, her contested claim remains the BIA’s primary reason for declining to grant Amah Mutsun federal tribal status. On Sept. 3, the BIA gave both factions a chance to submit more paperwork to prove who has the rightful claim to leadership. Lopez says he’ll go through the motions by giving the feds what they ask for, but he long ago lost faith in the process.

“To be honest, we’re not even sure we want that,” Lopez says. “Even though you do get certain benefits and sovereignty, when you’re federally recognized you also become a ward of the government—and the government has never had our best interests at heart.”

Meanwhile, the newest fight for Juristac is just getting started, and it’s likely to be a long and contentious one wrapped up in a complex history. “The destruction and domination of Native Americans never ended, it just evolved,” Lopez says.

Despite everything, Lopez remains hopeful.

“We’ve been told that the most effective way to stop this mine is by public opinion,” he says. “Because if the county supervisors want to get re-elected, they have to do what the people want. And so we’re hoping we can get the people to stand with us and tell the supervisors that they must not approve that mine.”

Jennifer Wadsworth and Grace Hase contributed to this report.

Next ArticleThe Birds and the Bees of Santa Cruz