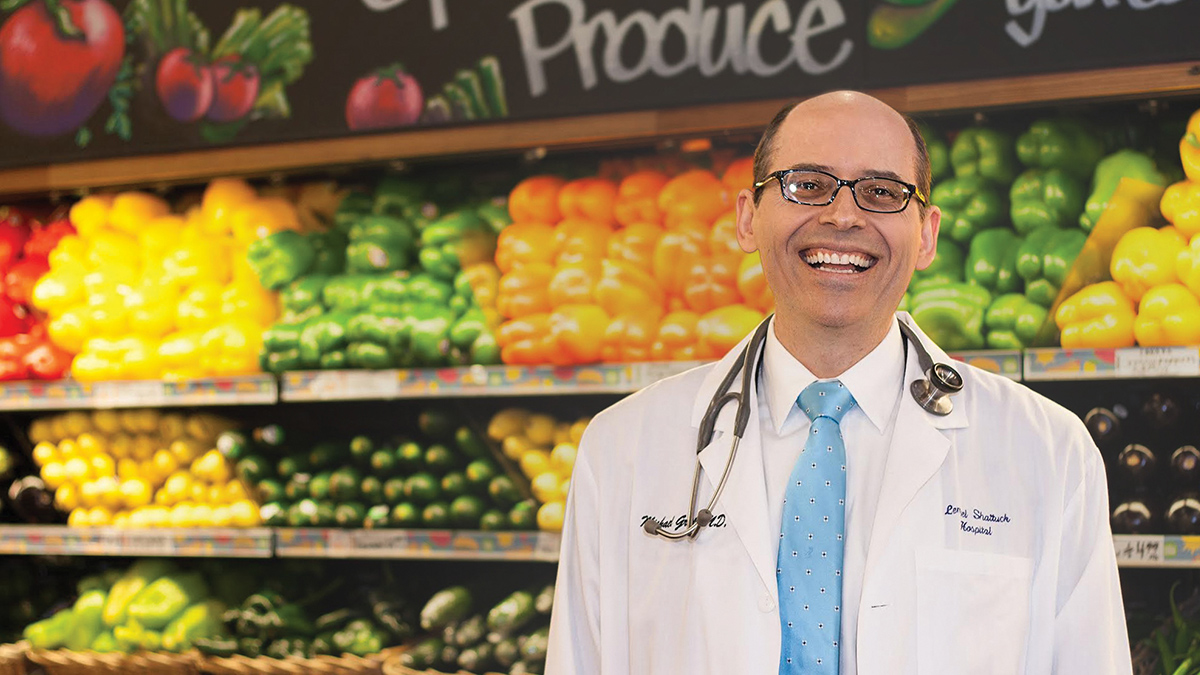 “Let’s face it, people are afraid of vegans,” Beth Love says with a smile.

Love is a cookbook author and proprietor of two sustainability organizations, Tastes Like Love and Eat for the Earth. On this sunny afternoon in her garden on the Westside, she’s prepared for us some delicious salad, along with homemade sauerkraut and a sampling of her nut-based cheeses.

The way Love sees it, the backlash against plant-based eating has gotten out of hand. “Government and industry,” she half-jokingly opines, “have conspired to make people think vegans are terrorists.”

As a committee member for Santa Cruz VegFest, Love is helping to bring nutritionist Dr. Michael Greger to the Rio Theatre on Tuesday, Jan. 14, for a talk on veganism and healthy living. As it happens, Greger, 47, actually isn’t crazy about the terms “vegan” and “vegetarian.” In med school, he knew vegans who subsisted on French fries and beer.

Founder of NutritionFacts.org and author of the bestselling How Not To Die, Greger has just released his latest book, called How Not To Diet. A plant-based diet, he writes, is “an eating pattern that minimizes the intake of meat, eggs, dairy, and processed junk and maximizes consumption of whole plant foods, such as fruits, vegetables, legumes (beans, split peas, chickpeas, and lentils), whole grains, nuts and seeds, mushrooms, and herbs and spices.”

He classifies foods according to an easy-to-follow “traffic light” system: green (eat to your heart’s content), yellow (very moderate consumption), and red (really think before putting it in your mouth). Some consumers may need red-light foods to eat their greens, he explains—offering the example of bacon bits on a salad—a choice far better than a fast-food burger and fries.

“The last thing we need is more dietary dogma,” he tells GT.

Greger notes that a 2019 Bill and Melinda Gates Foundation-funded study on global dietary habits and longevity reported that one in five deaths is linked to poor diet—meaning not enough fresh vegetables, seeds and nuts and also too much sugar, salt and trans fats. And this past spring, a study reported in the Journal of Nutrition found that vegan diets were found to produce the healthiest levels of disease-fighting biomarkers.

Greger first garnered attention in the 1990s when he served as an expert witness in court, as part of Oprah Winfrey’s defense when cattle farmers sued Oprah for defamation after she said she would stop eating hamburgers.

A common theme runs through Greger’s books, as well as those of his contemporaries like Dan Buettner, author of Blue Zones Kitchen, and Julieanna Hever and Raymond J. Cronise, who wrote Healthspan Solution: a major culprit behind weight gain and poor health can be traced to the standard American diet—SAD, as it’s sometimes known—where meat is major and leafy greens get relegated to side-dish status.

Tuesday night’s event, which is sold out, will include an introduction from Dr. Jackie Busse, Santa Cruz’s Instagram-famous plant-based pediatrician, as well as a performance from the Yala Lati Choir.

VegFest put the talk together as part of the group’s ongoing programs offering year-round support, community, and entertainment to the city’s plant-based and vegan-curious population.

“We’re so excited to bring Dr. Greger to Santa Cruz to help people take charge of their health in 2020,” says Wendy Gabbe Day, founder of Santa Cruz VegFest and 36-year vegan. She jokingly adds that she generally feels pressure “not to get some disease”—for fear that cynics might try and pin the blame on veganism.

Greger says that moving toward whole-food and plant-based nutrition helps keep the most common killers, such as heart disease and high blood pressure, at bay.

“Genes may load the gun, but diet pulls the trigger,” he tells GT.

Over Pad Thai and curry bowls at Charlie Hong Kong, nutritional consultant and chef instructor Sandi Rechenmacher explains that she’s been working on a local restaurant project, encouraging restaurants to flag their plant-based options and consider having plant-based menu inserts.

The core challenge standing in the way of healthy eating, laments Rechenmacher, 67, is a broader cultural attachment to the SAD diet.

“People are trusting,” says Rechenmacher, who met Greger at a conference over the summer. “We’re the first generation that’s been marketed to. The elephant in the room is so big we can’t even see it.” Rechenmacher says the marketing of food industry giants has put whole-food diets at a disadvantage.

Rechenmacher’s advice? “Look at what your great-grandparents were eating.” That probably means no Big Macs—but also no Beyond Burgers. Plant-based whole-food proponents are equally against “processed junk”—red and yellow color category in Greger’s system—even when it’s free of animal products.

Greger agrees that a moneyed information campaign gets in the way of a healthier America. As for Greger’s own funding, the backer for his Nutrition Facts project is the Jesse and Julie Rasch Foundation, which is dedicated to environmental conservation and medical research.

When it comes to the influence of major food manufacturers, Greger says it’s important to follow the money. “Healthy eating is bad for business,” he says. “It’s not some grand conspiracy. It’s not even anyone’s fault. It’s just how the system works.”

Michael Greger will give his “How Not to Die” talk at the Rio Theatre on Tuesday, Jan. 14 at 7:30pm. Sold out. Tickets may be available at the door. There will be a Q&A following the talk. For more information, visit santacruzvegfest.org.

Update Monday, Jan. 13, 3:20pm: A previous version of this article misstated the day of the event.

Previous ArticleNuz: What’s the Historic Part of the Circle Church?

Next ArticleAs Church’s Downtown Brewpub Fails, a Fight Over Its Old Home