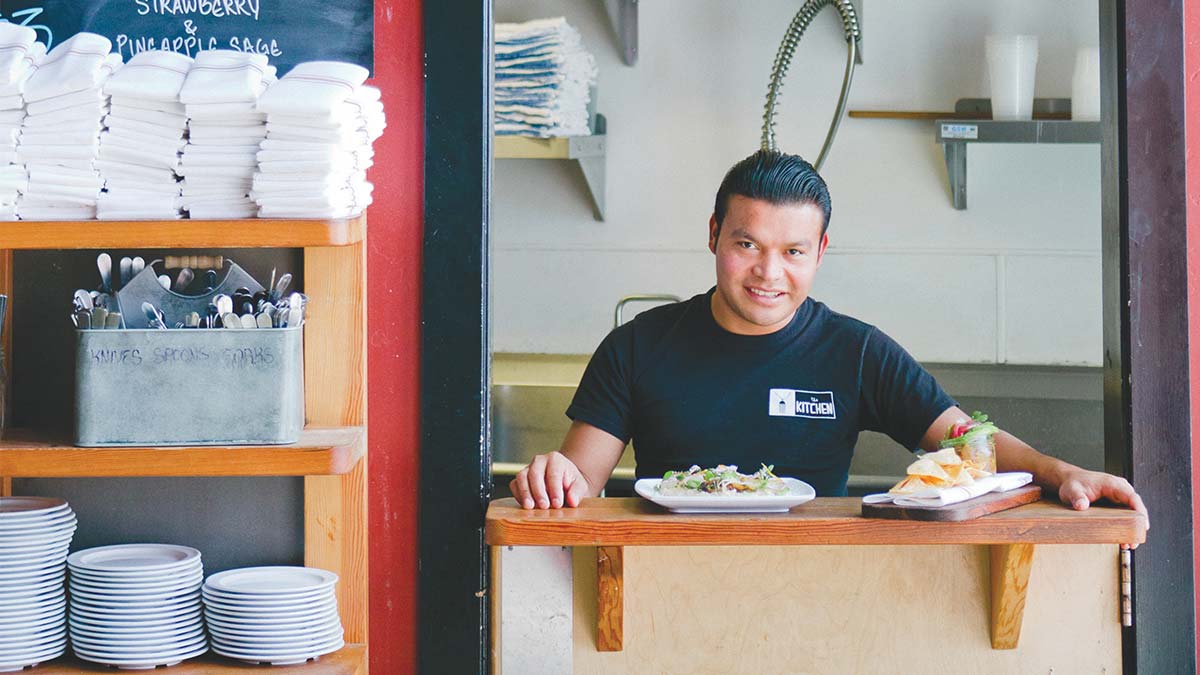 Santos Majano’s decision to leave Soif, where he had been the chef for five years, to partner with the barely 1-year-old Discretion Brewing came as a surprise to many on the dining scene.
But since that transition two years ago, Majano’s reasons for the move have become clear to those who have explored his innovative new offerings. Deeply inspired by the rise of craft beer in Santa Cruz, and Discretion Brewing’s philosophy in particular, Majano appears to have hit his culinary stride at the independently operated the Kitchen at Discretion, owned by Rob and Kathleen Genco, as he reinvents what one would expect to pair with a pint while staying true to his firmly held belief in the farm-to-table ethos.
Why did you choose to transition from Soif, where you’d been for five years, to a brewery?
I knew about Soif even before I moved to Santa Cruz. They have a very unique wine list, and I loved their farm-to-table philosophy. It was great. I loved it. I still have a great relationship with Patrice [Boyle, the owner]. She knows I’m someone who is ambitious. I’m a dreamer. I never want to get comfortable. And I think it shows in my menu. We don’t want to keep doing the same thing. We always want to be thinking a little outside the box.
I knew Discretion from the time they were building it. My wife said, “There’s a new brewery opening up, and it seems like craft brewing is starting to happen in Santa Cruz.” So we peeked through the window.

“… if Discretion spends the time and puts the energy into sourcing the best ingredients to make the best beer, then I want to match that… Our philosophy is identical. It’s almost like sharing the same brain.” – Chef Santos Majano

After a year or so, we heard Main Street [Garden & Cafe] had left, and I became curious about what was going to happen next. One of my prep cooks also worked at Everett Family Farms and she would drop flowers off at Discretion every week, and she told me they were looking for someone else to go in the kitchen. I could not believe the opportunity was available. I felt for sure someone would have jumped in there right away. It seemed too good to be true.
We met and we really connected. They care about their product, and are invested so much in what they put out.
Did you feel that there was some frontier in pairing food and beer? Wine has been the dominant alcohol to pair with food for so long, but pairing with beer is still fairly new.
Yes, I absolutely agree. I’m always looking for something exciting, and Santa Cruz is just blooming with crafted beer. I like to move with that.


I am a chef who has worked hard to build up where I am right now, to make the kind of food I want to make. I think a lot of people thought when I left Soif that I was just going to be making bar food, and it’s not like that. People asked how my food was going to match the beer, but you know, when you think about wine, you think about the smells, the body, the acidity, the balance. Beer also has those components. It has roastiness, there’s chocolate, there’s hoppiness, bitterness. You have to think slightly differently, but it’s the same thing when you are creating. You just have to look for the balance of flavors. I think it’s kind of crazy to say, “oh, you can’t pair your food with beer.” That’s not true. You can actually make some amazing dishes.
Did you make adjustments to your culinary style when you transitioned from Soif to Discretion?
I wouldn’t say “adjust,” but we did think slightly differently. The adjustments came when we were thinking about how to incorporate beer into the food. We thought about things like “how can we incorporate a black lager into our barbecue sauce?” But ultimately we knew we wanted to do something exciting that showcased the farm-to-table philosophy.
How much do you consider the beer when you’re creating a menu item?
A good 60-70-percent. I know someone is going to come here, have a beer and look for something to go with it. Whether the beer complements the food or the food complements the beer, there has to be one or the other.
What inspires you right now? What’s influencing your menu?
Always the season. The farmers market is a big thing for us. We work with a few farms that will call us when they get really exceptional produce in. But we have some menu items that will never go away. We tried to change them once, and people didn’t like that.
I remember when you tried to take the chicken and waffles away. And people were like, ‘Whoa! You can’t just put something like this on the menu and then take it off!’
Of course, chicken and waffles is nothing new. But I wanted to make it different, because someone else is always going to do it. When people think of that dish, they think fried chicken. Well, I don’t have a fryer. And when people think of a brewery, they automatically think of chicken wings, so we decided to go with that instead. I also wanted to do something unique with the syrup. I love the flavors when you combine Asian cooking with French or the South. We infused our syrup with ginger, lemongrass and a dash of soy sauce. And we sell so many of those things.
This is what we’re looking for all the time. We didn’t want to do something too strange. We want it to be familiar to people, but when they pick it up at the window, they’re wowed.

Have new customers been receptive to the style of food you’re doing here?
I have my mindset with what I want to do and what I believe, but I also know that when you walk into a brewery, most of the time there’s going to be a burger. But the truth is, that’s not our philosophy. There are already a ton of breweries out there where you can go and have that. I’m not against it, but if Discretion spends the time and puts the energy into sourcing the best ingredients to make the best beer, then I want to match that. They make beer right here, sourcing the best ingredients, and we do exactly the same thing. Our philosophy is identical. It’s almost like sharing the same brain.
You’ve always been a huge supporter of the farm-to-table movement. Why is it so important to you?
I grew up in El Salvador, and I came to Monterey in 1997. It’s funny, I distinctly remember my mother telling me that dinner was ready, all I needed to do was grab it from the kitchen. And I didn’t want to. I was, like, I don’t want to go to the kitchen! But the connection to the farm was important to me. I worked with my dad and my brothers on our farm, where we were growing our own squash, watermelons, green beans, corn, tomatoes … We would sell half of what we produced, and the other half we’d keep for the family. Now, looking back on what I had makes me appreciate so much. That’s why now when I go to the farmers market, I look at produce that was picked that morning or the day before and I can definitely appreciate that. I know it hasn’t traveled 300 miles to get there, it traveled 20 minutes for us to grab it and bring it to our kitchen. That connection to the farm has always been there, from when I was little.

Previous ArticleRob Brezsny’s Astrology May 11 ­— May 17