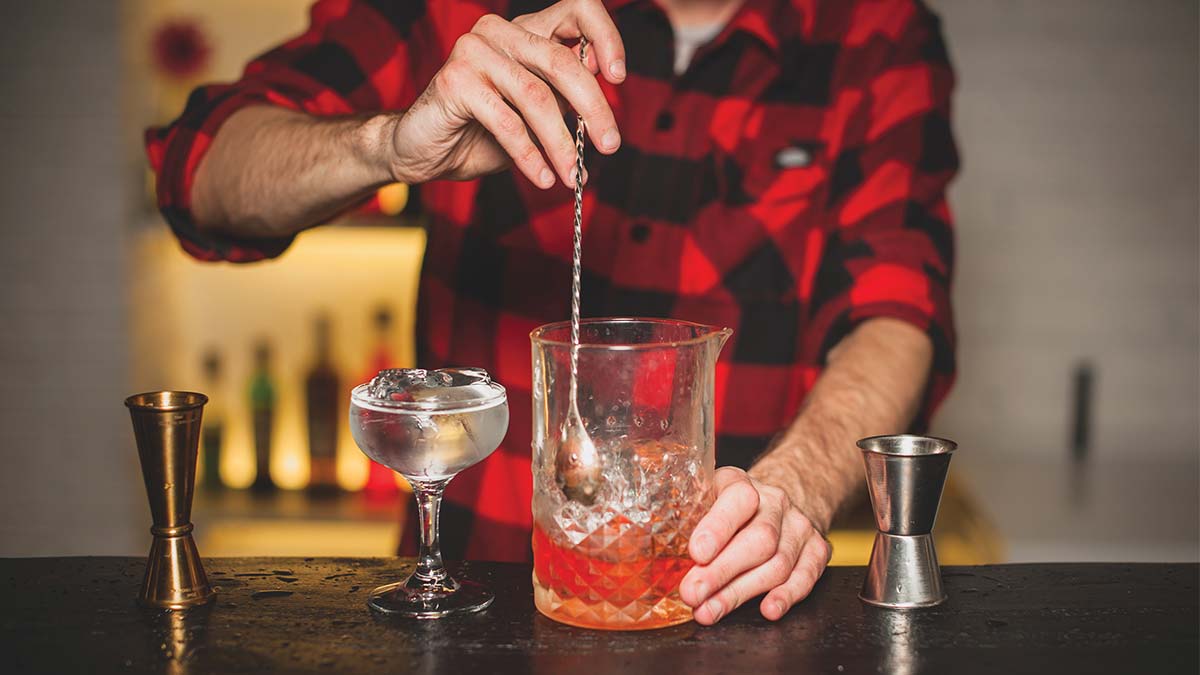 After several decades of silent running given over to extensive wine tasting and craft beer brewing, the cocktail boom is on in Santa Cruz.
The origins of the term “cocktail” are lost in a vague haze of media hype and archival misprints, but it seems to have been used well before the characters created by Charles Dickens got thoroughly blitzed on rum punch and gin rickeys. So let’s just say that for a good 200 years thirsty patrons in search of high-proof excitement turned to “mixed drinks” involving more than two ingredients to amuse their tastebuds and release their inhibitions.
The growing appeal of liquor-infused drinks—with even the area’s top wine bar poised to unveil its new liquor license—points to a spiritual revival, with a 21st century emphasis on the botanical and artisanal.
At Oswald, responsive mixologists are always happy to give house cocktails a customized spin. A bit less simple syrup, a hint more bitters, or perhaps the substitution of basil for mint—the patron can help dial in their desires. I often ask for the Amorous to be made with Fernet Branca for a slightly bitter sparkle. The point is to create a complex artwork in a glass that can move through various flavor notes while the patron lingers, sips, and lingers some more.
The Cosmopolitan broke open the martini mold about 20 years ago to court female consumers, who, (it was believed) preferred the bitter edge taken off their cocktails. It’s hard to argue with the visual and sensual appeal of vodka, Triple Sec, cranberry juice, and sweetened lime juice. Pretty and pink. As sophistication levels grew, patron desires for the new drove the Cosmo to morph into a wide range of postmodern libations involving cranberry and lime. Mint, for example, added an herbal thrill. Gin replaced vodka for a deeper perfume of juniper. And cucumber reigns as the go-to vegetal collaborator.
Fashionable new cocktails borrow their appealing complexity from the addition of unexpected change-ups of ingredients. Blood orange, chilis, cucumber, saffron, fruit purees. Others amp up their impact by adding more than one extra shade of liqueur. Amaro plus vodka. Fernet plus hard cider plus gin. See what I mean?

So convinced was Santa Cruz entrepreneur Sean Venus of the rising tide of high-proof cocktails that he recently opened the area’s first distillery, making artisanal gins as well as tequila and bourbon. “I think the cocktail and spirits craze is a natural evolution of what we have seen in other culinary trends,” he says. New flavors and the handmade touch are noted by Venus as fueling this renaissance.
“I think this has been building for quite some time, but recent changes in legislation around the country has made it easier for a small distiller to exist,” says Venus. “This has reinforced and accelerated the movement, as there are many more distillers today out there telling their story and sharing their spirits.”
At 515 Kitchen & Cocktails, the upstairs bar works up uncanny cocktails with alchemical precision. The inventive cocktail menu suggests a science experiment in an heirloom garden. For example, the Garden Still is a blend of two gins, absinthe, Cynar, basil, and lemon. And my favorite, the Cantina Band, is stocked with St. George Terroir Gin, Fernet Branca, ginger beer, and lime juice. Disarming combinations, ecstasy for the mouth.
Red, upstairs in the historic Santa Cruz Hotel, is on everyone’s shortlist of places to hang and sip a slow handcrafted cocktail. Serious martinis and cucumber Cosmos with basil are just the tip of the iceberg at this throbbing outpost of adult beverages.
“We pride ourselves on creating original cocktails with fresh produce and house-infused spirits,” says general manager Taylor Fontana. “A few of our most popular cocktails would be our Cucumber Mojito and the Naked and Famous.”
Fontana notes the presence of organic mint in the mojito, and offers the recipe for the N&F: mezcal, peach liqueur, housemade honey syrup, habanero bitters, lime juice, and ginger beer. Blazing idea.
At Aptos’ busy Kauboi Japanese Grill & Sushi Bar, another outpost of mixology, a signature hit is the Hinky Dink, involving no fewer than four liquors—vodka, pomegranate liqueur, limoncello, and Cointreau—as well as lemon juice and mint. The cocktail menu is astonishing. My mouth waters for the Mexican Elvis, a mix of Reposado tequila, Minero mezcal, Fernet Branca rinse, pineapple syrup, and lime. Ay caramba!
At the surf saloon with a view—Aquarius, tucked inside the Dream Inn—theme cocktails rule. The Legend offers purists a classic martini starring Ketel One. But for a walk on the wild side many swear by the Aeronaut loaded with designer tequila, hibiscus, Cointreau, agave and cranberry. Seriously, how could you have any more fun for only $12?

Everyone has a favorite cocktail. Here’s the Pegu Club, a favorite of organic gin-smith Sean Venus.
1 1/2 ounces Venus Gin Blend No. 01
3/4 ounce fresh lime juice
1/2 ounce orange simple syrup*
2 dashes Angostura bitters
Combine all ingredients in a cocktail shaker with ice. Shake and serve up with an orange twist.
*Orange simple syrup:  Combine sugar and water in a saucepan over medium high heat, 1-to-1 ratio. Add zest from one orange and stir until sugar is dissolved. Immediately remove from heat and strain. Store refrigerated.

Next ArticleWhose Cider You On?