.Does Watsonville Community Hospital Have a Buyer? 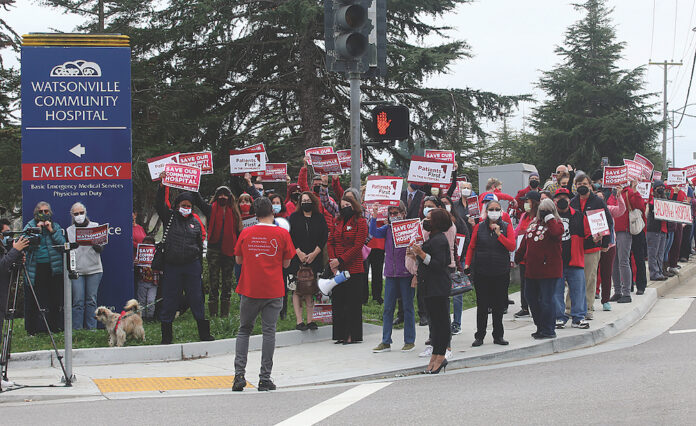 WATSONVILLE—Just hours after a group of roughly 150 nurses amassed in front of Watsonville Community Hospital to drum up public support and stop its closure, they received a welcome bit of news.

The news came about a week after Salyer announced it was facing closure without a buyer.

In a letter to employees, he cited financial trouble stemming from years of declining revenues compounded by the Covid-19 pandemic.

Without the agreement, Salyer said the hospital would have had to begin canceling services and transferring patients by Monday,  and possibly close by Jan. 28.

The noon rally garnered support from hundreds of people driving by.

“The nurses are here to stand for our community, to push to keep this hospital open,” said Registered Nurse Roseann Farris. “And we will do whatever we can to do that.”

But in the press release, Salyer stated that the hospital has received enough funding to operate through the end of March 2022.

“We are excited to have reached a preliminary agreement with the PVHDP for the acquisition of the hospital’s operations and to have funding to continue the life-saving work of providing care to our community,” Salyer said.

Farris said that union officials are reaching out to local and state elected officials for their help.

Some 650 employees who were given notice about possible layoffs have now been spared, at least temporarily.

The loss of one of the county’s biggest employers, Farris said, would be devastating for both the employees and the community.

Nurses also say that the loss of  South County’s only emergency room would throw into upheaval the county’s ability to deal with medical emergencies.

In a prepared statement, Salyer says the hospital will continue focusing on “exceptional quality patient care.”

“Watsonville Community Hospital’s focus today – as it is every day – is on providing to our community and other staff who continue to serve our patients with the utmost compassion and kindness,” he said.

The PVHCDP is a nonprofit created by the County of Santa Cruz, the city of Watsonville, the Community Health Trust of Pajaro Valley and Salud Para La Gente.

Hospital officials say the sale will likely be completed through a Chapter 11 bankruptcy reorganization.

As part of that process, the hospital plans to file a motion in February asking the court to approve PVHCDP as the lead buyer, and approve the sale through a court-supervised auction.

“While we still have work to do before a final agreement, this step averted imminent closure of Watsonville Community Hospital and provides a realistic path toward a stable, sustainable hospital that supports the health and welfare of the people of Pajaro Valley,” Hall said.

Hall cautioned that the preliminary agreement is only for PVHCDP to be the primary—or “stalking horse”—bidder as the sale moves forward.

It is too early, therefore, to talk about the sale price for such a complex transaction, which will be further complicated by the bankruptcy proceedings, Hall said.

In addition, the PVHCDP still has to officially establish itself through the state legislative process, Hall said.

“Thank goodness we got to this place where the hospital can stay open,” she said. “I feel like we pulled off a small miracle.”