.The Earthquake That Ended the Santa Cruz Hippie Era 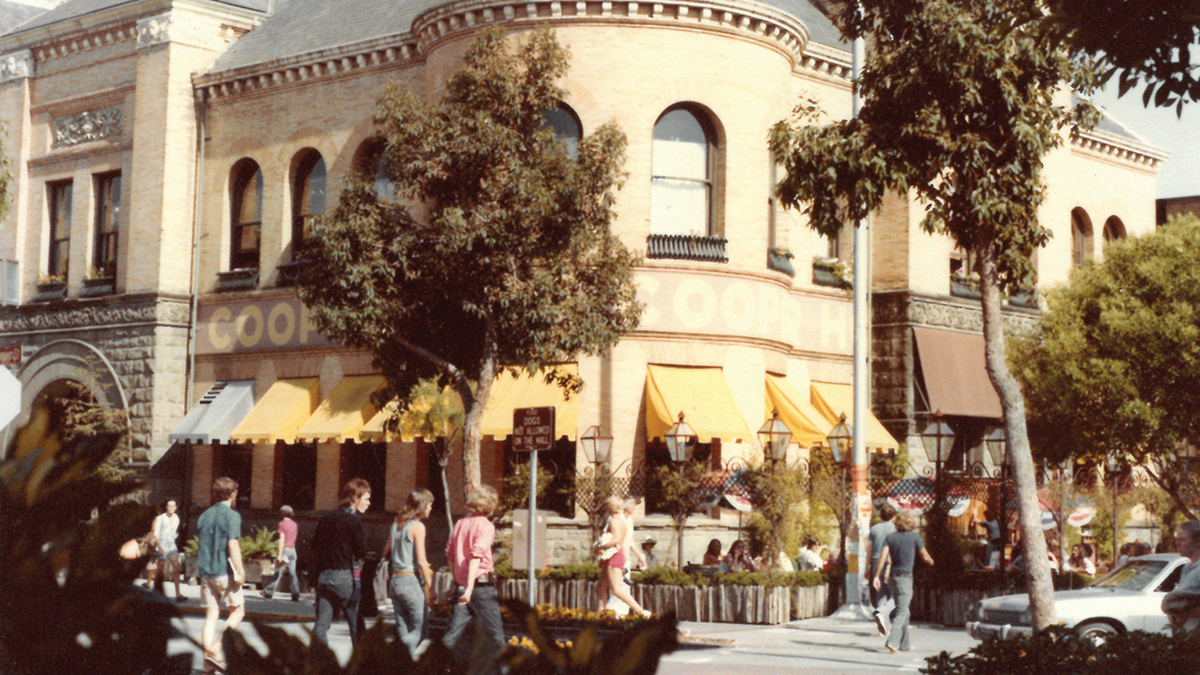 Everyone who was in Santa Cruz when the Loma Prieta earthquake hit has a story about it. But few of them are likely to be as tragically ironic as historian Ross Gibson’s. On Oct. 17, 1989, Gibson was going door-to-door downtown, talking to local business owners about his latest project.

“We were going to celebrate the 20th anniversary of the Pacific Garden Mall, and I had been preparing for it all that day,” he says. “And my experience of the earthquake was seeing the last minutes of the old downtown.”

In the late afternoon, he went back to his home on the Westside, and not long after, at 5:04pm, he felt the house shake for those infamous 15 seconds—though it felt like an eternity.

When he had gotten his bearings, Gibson walked out to see if anyone else had felt it. He was thrown off at first by the fact that there were still joggers on the sidewalk and surfers in the water. But then he saw an ominous sign that things were indeed as bad as he thought—in fact, much worse.

“This black cloud came up from the downtown,” says Gibson. “I thought, ‘Is downtown on fire?’ But it wasn’t fire. The buildings that had collapsed had sent up this smoke of debris.”

The downtown he had been preparing to pay tribute to had literally just gone up in smoke.

Now, 30 years later, Gibson will be paying tribute to the Pacific Garden Mall in a different way: by celebrating its memory. On Saturday, Oct. 12, at 1pm, Gibson will lead a tour of downtown that will focus on what made the Pacific Garden Mall unique, pointing out where certain famous buildings once stood and how the very shape of Pacific Avenue was altered by the Loma Prieta quake.

Born in Santa Cruz in the ’50s, and returning in the early ’70s to attend Cabrillo, Gibson is a passionate champion of the unorthodox urban vision that sprawled out over the main street of Santa Cruz for two decades. As I walked along Pacific Avenue with him last week, and he pointed out various sites past and present that he’ll talk about in the tour—the Flatiron Building, the Palomar Arcade, the Trust Building, the Lulu Carpenter sign, and many more—it was obvious that Gibson can discuss any phase of Santa Cruz history, from the 1800s to the present.

But it was also obvious that he has a special place in his heart for the Pacific Garden Mall era, and especially for his favorite Santa Cruz building ever: the Cooper House. For that reason, the earthquake’s legacy for him goes beyond some astronomical dollar value or number of buildings lost. The cultural impact was every bit as significant.

“The earthquake marked the end of the hippie era in Santa Cruz,” he says. “Not that it didn’t continue in different ways, but the hippie movement here was really tied to the development of the Pacific Garden Mall from 1968 to when it was destroyed. And the Cooper House itself was promoted as a Renaissance art center, where you could go in and shop around and people would dress up in Victorian styles. But it was really counterculture. You had the rainbow dancer in front of the Cooper House, and the band Warmth playing, and the sidewalk café there with all the interesting characters. And then the Oak Room bar. There were just so many wonderful details to that as kind of the heart and soul of downtown. It was just a gem.”

As a participant in Vision Santa Cruz—a group formed in 1990 to aid in the redesign and rebuilding of the downtown—Gibson saw first-hand how much the physical nature of Santa Cruz’s main street, with its famously vibrant street culture, was going to change.

“Prior to this more straight street with trees along the edge, we had a very undulating street. That’s why they called it the Pacific Garden Mall, because the street was mostly garden, and the one-lane road would meander back and forth. By being one lane, it made it easier for pedestrians to cross without feeling like they were jumping into traffic,” he says. “There were a whole bunch of trees of different kinds. This was an arboreal mall, where every tree would have a little plaque under it describing what kind of tree it was. It was an arboretum, essentially.”

Perhaps even wilder than the civic experiment that Santa Cruz undertook in the 1960s is how close it came to never happening at all. As Gibson explains, the city was set on an entirely different design by 1960, one that could best be described as “post-World War II generic” or—as Gibson likes to call it—“corporate international style.”

“The plan was every building in the downtown would be torn down, except for the post office and the city hall and the civic auditorium,” he says. “And everything else would be either glass and steel skyscrapers or cinder-block, one-story shopping center style, without any artistic additions to it. They were planning to freeway-ize the entire downtown.”

Three year later, with plans for this freeway-ization the subject of contentious debate, Charles and Esther Abbott arrived in Santa Cruz. Charles—perhaps now best known to the general public as the namesake of Abbott Square—was alarmed to learn of what was in the works, since he and Esther had chosen Santa Cruz for their retirement precisely because of its history and distinctive Victorian flourishes.

“He was the one who saw what was happening as people tried to modernize, thinking, ‘We’ve been told this is the way we can become more successful as a downtown business district,’” says Gibson. “A lot of them were whitewashing historic buildings so that the details would not show up—because the more whitewash, the less you would know these were not modern buildings. But Chuck said, ‘Go in the opposite direction, bring out the detail, do it the way the Victorians did, and promote it as a unique place.’”

Incredibly, he was successful, and within a few years, the city had pivoted hard to Abbott’s vision. “He was able to create this as a national downtown historic district, and create the garden mall as a kind of park-like setting for the district,” says Gibson.

Gibson has given this historic tour of downtown many times—in fact, the first time he did so was right after the earthquake, at the request of a group of planning commissioners and architects.

“They’d just completed most of the demolitions of the buildings they thought were going to fall over. And they said, ‘Now we can’t remember where anything is. You get down there, there’s this big hole in the ground, it doesn’t look anything like it used to look. Could you take us on a tour of Pacific Avenue and fill in the historical part of it, and let us know where we are?’”

Gibson was closely involved with many of the post-earthquake plaques and other architectural memorials that still exist today downtown; some he even designed himself. And though he misses a lot of the more than 30 buildings that were lost in the Loma Prieta quake, he’s proud of the work he did as part of Vision Santa Cruz trying to put the city’s rebuilt downtown on the right path. Even today, downtown does not have the cookie-cutter look seen in far too many cities.

“We said, ‘Whatever buildings are left, we don’t want them to end up looking lost in a modern setting,” says Gibson. “We need to have downtown design guidelines that will incorporate the humanist ethic that the old buildings were built with, and not the modernist ethic of freeway vernacular—design around cars instead of design around humans. We want detail and artistic elements; we don’t want them stripped down to just a square box.”

Ross Gibson will lead a walking tour of downtown on Saturday, Oct. 12, from 1-2pm. The tour begins at the Eagle Monument at Pacific and Front streets (in front of Jamba Juice). Wear comfortable walking shoes. The event is part of ‘Epicenter: The Loma Prieta Earthquake 30th Anniversary Oral Histories Project.’

Next Article5 Things To Do In Santa Cruz: October 9-15