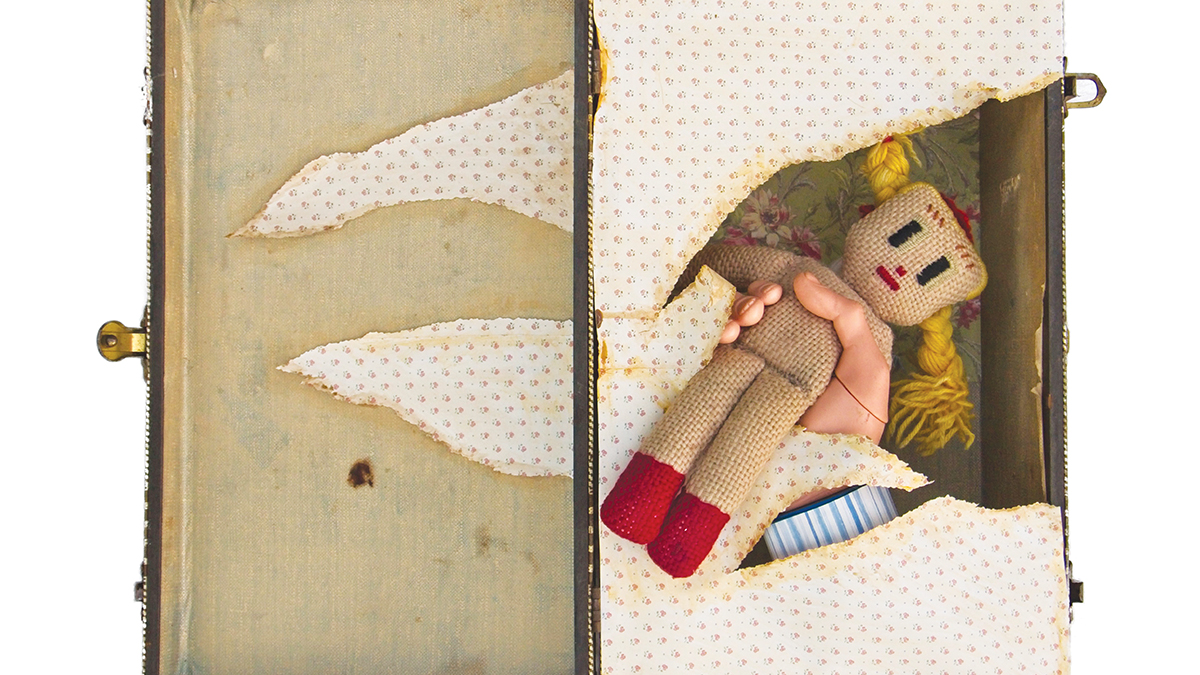 A delicate doll with a face that has started to chip away after years of abuse. An unnerving action figure to represent the creepy uncle dubiously picked to babysit. Rows of small, detached arms reaching out of a suitcase to symbolize how young immigrants are ripped away from their parents.

These are some of the unnerving scenes inspired by real-life stories of childhood trauma in a new art exhibit by Santa Cruz doctor and acupuncturist Dawn Motyka, known locally as “Dr. Dawn.” Her found-object assemblages are on display in the Emotional Baggage exhibit at the Westside Habitat for Humanity store through October.

“I’ve been kind of haunted by these images,” says Motyka, who runs Westside functional medicine practice Optimage Health. “It’s like a mushroom, where it just kind of grew over time.”

The objects that populate the pieces, collected mostly at flea markets over many years, reflect stories that Motyka has heard from patients over her three-decade career focused on pain management. Though stories are “very disguised” to protect patient privacy, they’re inspired by real-life details.

Take the “Fred Munster-looking” doll that reminded her of a patient who described years of sexual abuse by an uncle. “I thought, ‘That’s Uncle Bob,’” Mytoka says. “Tall, creepy, thin, striped PJs.”

Motyka sees the project as part of a bigger conversation in medical research and the media about how childhood trauma manifests in physical symptoms like chronic pain, insomnia or anxiety.

It’s a topic that has gained attention since the late ’90s, when researchers at Kaiser Permanente found that children who experienced adverse childhood events—abuse, domestic violence, an addicted or incarcerated family member—are more likely to struggle with obesity, addiction, depression or other high-risk behaviors.

The findings were stark: “There is a strong graded relationship between the breadth of exposure to abuse or household dysfunction during childhood and multiple risk factors for several of the leading causes of death in adults,” the study concluded.

The concept is perhaps best distilled in Motyka’s mixed-media piece “Papered Over,” where a ragdoll gripped by a plastic hand is partially obscured by a torn sheet of paper—a nod to how repressed traumatic memories can rear up suddenly and disrupt life years later.

“This stuff gets buried,” Motyka says. “It’s emotional baggage locked away in the closet.”

She didn’t always have such a holistic view of how patients end up at the doctor’s office. By the late ’90s, Motyka says, she’d grown frustrated with Band-Aid pharmaceutical solutions to pain, and the financial pressure put on doctors to get through patients quickly.

“I was so sick of writing prescriptions for Vicodin, because that’s all I could do for pain for primary care,” she says.

After starting her own practice and expanding to include acupuncture and other functional medicine, Mytoka had more control over her time and capacity to get to the root issues of pain. Still, she says, she tries not to pry.

“If someone opens the door, I will go through the door,” Mytoka says. “We’re trained not to do that in medicine.”

While she hopes to work with local art groups to bring a version of the exhibit to surrounding areas, Mytoka has so far avoided parlaying her pieces into explicit activism. Employees at Habitat for Humanity are equipped with a resource list for anyone who seems to react strongly to the artwork, but Motyka says her priority is recognition rather than recommending any one treatment.

“I didn’t want to make it an advertisement for mental health services,” Motyka says. “The message is, ‘You are not alone.’”

‘Emotional Baggage’ is on display through October at the Habitat for Humanity ReStore, 719 Swift St. Suite 62, Santa Cruz. jivamedia.com/dawnart2.