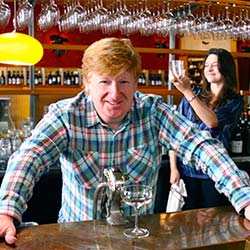 Putting the “bun” in “Easter Bunny,” the aromatic hot cross bun has been a fixture of Easter since the mid-18th century.
In the Old World, hot cross buns were sold on the streets on Good Friday. “Hot cross buns, hot cross buns, one a penny, two a penny, hot cross buns.” That’s what Charles Dickens would have heard the street vendors crying as they sold fresh-from-the-oven pastries to hungry, pious crowds. Many believe these little holiday cakes to be the descendants of pastries baked for the pagan Anglo-Saxon goddess Eostre. It’s a culinary myth that I like, almost as much as I like the delicious little sweet loaves themselves.
There’s still time to indulge in this fragrant Easter season’s sweet spiced bread. We have always loved the indescribable deliciousness of these cuboid buns, risen (in honor of the occasion, one suspects) with yeast, studded with candied orange peel and raisins, with a frosting cross on top. Having eaten my way through more HCBs than was prudent, all in the interest of research, I can announce that my personal favorite this year is the tender, toothsome example from Gayle’s Bakery. All the spice flavors are in balance. These are, simply put—classic. Get some fast. After Easter you’ll have to wait for a whole year ($2 each).

Farm to Table: For the 1 Percent?

Somebody’s got to say it. Since controversy seems to have grabbed our world by the throat, I might as well wade on in. I was recently sent the 2016 schedule of al fresco dinners created by the folks at Outstanding in the Field. I’ve been to several of these lengthy, atmospheric events in the past. Some were astonishingly wonderful. (I recall pork belly made by David Kinch of Manresa Restaurant served in a Happy Valley apple orchard, seated next to Ridge winemaker Paul Draper, for example.) Others were, well, memorable if one thinks like a laid-back left-coast hipster. As I surveyed this year’s listing of dinners that will spread the linen tables in fields, beaches and orchards all over the country, my mouth began watering. A ranch in Petaluma in May. A Sea Cove near Half Moon Bay. Roger that. But before I could continue my gastronomic reveries, my eye snagged on something I couldn’t quite wrap my brain around: The price. The price for one of these California field dinners showcasing local foods, fine chefs, and fine winemakers is now $245 per person. So, by my reckoning, that means that dinner for two will run you $500. If you want to feast in a field near Tokyo, it’ll run you $320 per person (excluding airfare). The ones on Whidbey Island in Washington are only $225, and in the Midwest, dinners run $215 per person. I was hyperventilating by the time I finished reading. But, if you have something special to celebrate, visit outstandinginthefield.com.

The wines of Nicole Walsh’s Ser Winery will be highlighted at this Saturday’s Annieglass winetasting, March 26 from 1-3:30 p.m. This is a great time to hang out at the tasting bar tucked between the showroom and fabrication studio of Annieglass’ Watsonville headquarters, and taste a flight of Walsh’s outstanding wines. Sip, shop and take a free studio tour that starts at 1:30 p.m. The showroom in Watsonville is located at 310 Harvest Drive. annieglass.com

About this severance from his long-time exclusive kitchen grower, three-Star Michelin chef David Kinch of Manresa told me last week, “I will be using a series of small farmers and going back to the farmers markets. Our food is always evolving and dynamic. That said, I don’t expect major changes,” he added. Stay tuned.

Next ArticleBehind the Masks