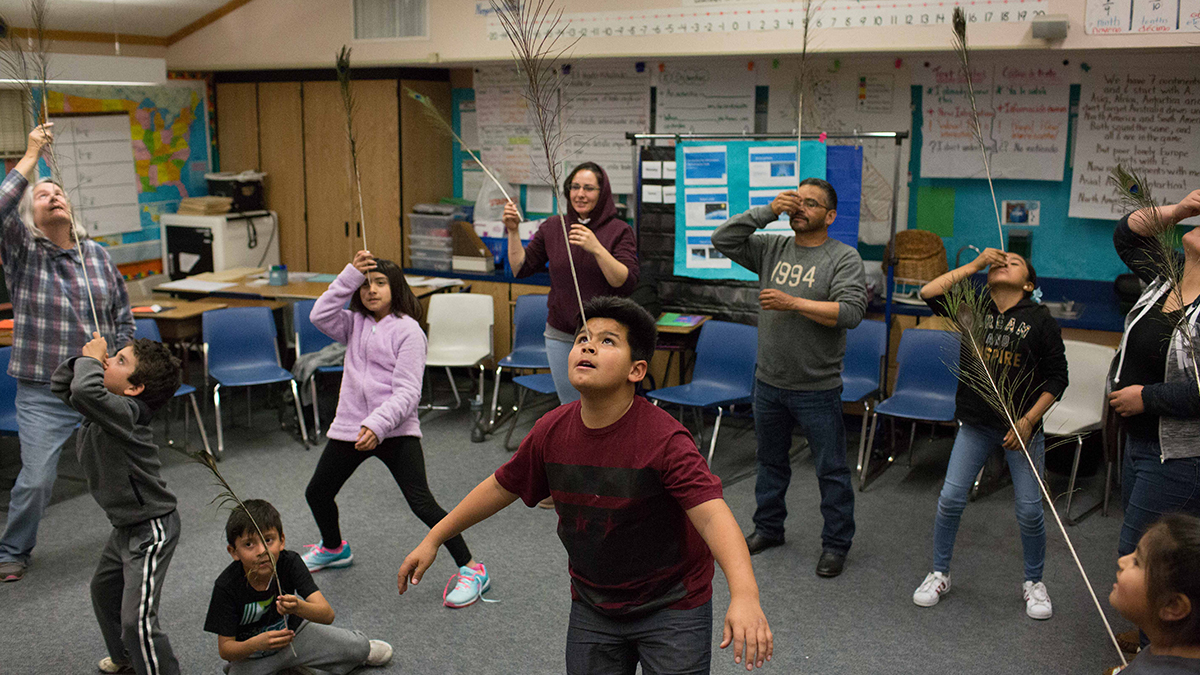 [dropcap]K[/dropcap]ids don’t always require a huge push to get involved in art. Sometimes all it takes is the promise of a pizza slice.

Arts Council Santa Cruz County is hosting Family Arts Nights through the month of March to supplement K-12 education with more arts-based learning. Lifelong South County resident Desarie Garcia and her two children have been to these family nights at Watsonville’s Starlight Elementary School twice now, and Garcia sees them as an opportunity to bond with her kids.

“Sometimes working so much, we don’t get to see much of them,” Garcia says. “So this is a good opportunity to get to know them on a different level.”

The Arts Council has hosted annual Family Arts Nights for at least a decade now, although no one can remember exactly when the tradition started. This is only the event’s second time at Starlight Elementary in recent years. Nearly 90 percent of the students and families who participate in the program are low-income or English-language learners. “I come here to support my son and make him feel more confident at school, and to show him not to be afraid of showing yourself to everyone,” Garcia says. “My daughter will be going to kindergarten here soon too, and I want to encourage her to not be so shy.”

At Starlight’s Arts Night, Garcia and her children sample a drumming class, where they practice playing and singing with about 15 others. “It really just turns into a giant dance party,” Arts Council communications director Crystal Birns tells me, just before class wraps up.

Next door, students are balancing peacock feathers on their noses, foreheads and hands. Parents and kids roam about the room, laughing and bumping into each other as they try to keep their feathers in the air. After the exercise, which is supposed to teach patience and balance, kids partner up for a character game.

The Family Arts Nights are usually held in March, which is National Arts in Education Month. This year, the Arts Council is holding 13 such events at various county schools, each selected based on need, as well as the availability and popularity of the arts. The Arts Council specifically targets the Pajaro Valley and Live Oak school districts, because they serve the highest number of at-risk students.

The state of California has minimum requirements for arts learning in K-12 education. Unfortunately, many schools like Starlight aren’t always able to meet these requirements. Arts education director Sarah Brothers says that getting to the minimum arts-related education requirement can be hard, due to funding disparities that leave districts like Pajaro Valley Unified with less money.

“It’s a result of years and years of budget cuts, and a lack of funding,” Brothers says

Under the No Child Left Behind Act, the federal government began assessing school districts by their students’ scores on reading and mathematics tests in the early 2000s. Although it was dismantled nearly three years ago, the act lead to a larger focus on improving science and math-related studies, at the expense of arts classes, when budget cuts arrived a few years later.

According to the California Alliance for Arts Education, the quality and frequency of arts education across California’s public schools is generally inconsistent because schools have so many “competing priorities,” and discretionary funding is scarce. As a result, arts participation varies greatly around the state. Disadvantaged and at-risk youth, in particular, end up taking reading and math instead of arts classes.

To fill funding holes and provide more individualized budgetary support, the California Department of Education introduced the the Local Control and Accountability Plan (LCAP) in 2013—allowing local funds to go toward individualized district needs. Because of the LCAP’s flexibility, Pajaro Valley Unified was able to allocate more cash to arts programs in order to address the overwhelming local calls for more arts education from parents and students during town hall meetings.

“I feel like now the pendulum is swinging back, because teachers and school administrators are starting to realize the importance of arts education in the schools, and it is slowly starting to creep back,” Brothers says. “Pajaro Valley Unified School District didn’t have any visual- and arts-credentialed teachers for years, and just a couple of years ago they hired around 20 full-time art teachers.”

Although Arts Council Santa Cruz County can’t support every local school, Brothers believes that providing the neediest students with access to arts education is a fundamental building block toward a better education and a brighter future.

“There is a window of opportunity right now because of this new call for ways of learning, and that’s exciting,” Brothers says. “The arts speak to the four C’s—creativity, critical thinking, collaboration and communication, which extend into other areas of learning. That’s really what the arts are all about.”