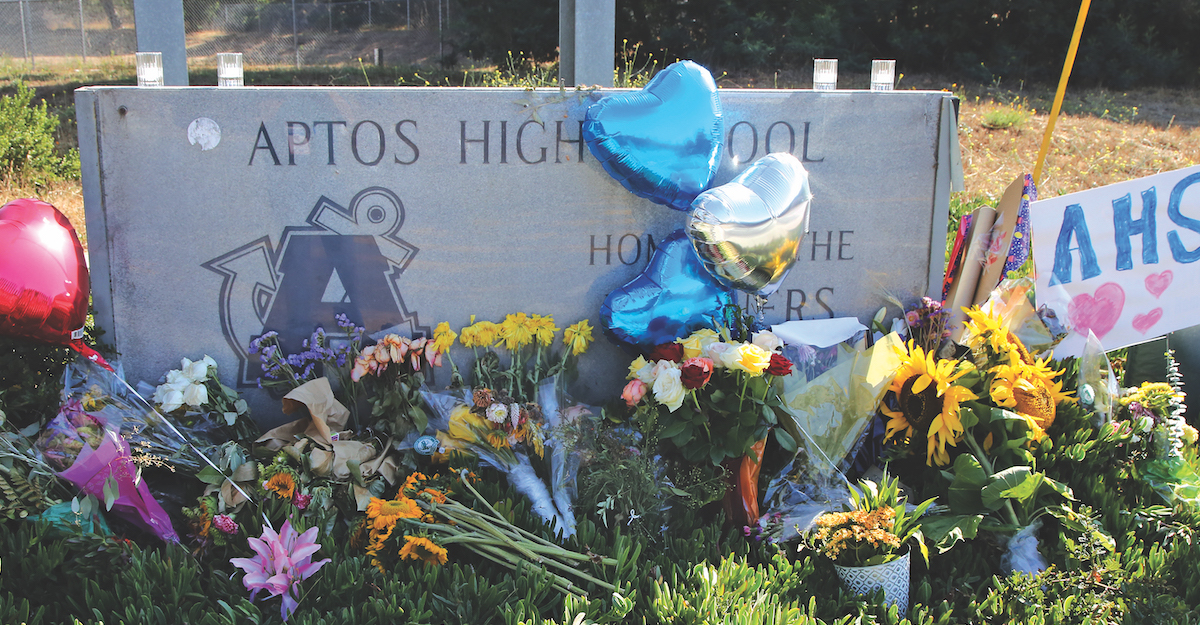 The family of the Aptos High School student who died last year after he was stabbed during an on-campus attack has sued Pajaro Valley Unified School District, claiming that the district failed in its duty to protect its students.

The lawsuit, filed July 7 by attorney Charles Tony Piccuta, also states that the district knew that the student involved in the attack—identified only as K.O.—had been involved in a separate on-campus attack with a knife two weeks earlier.

The lawsuit is part of the continuation process from the initial claim filed in December 2021.

Because that attack amounted to child abuse, the district was therefore required to inform local law enforcement of the incident, Piccuta says.

“Had (the) defendants fulfilled their duties to report K.O. to law enforcement, K.O. would not have been present at AHS on August 31, 2021, and Gerardo would still be alive,” he stated in the lawsuit.

In addition, Piccuta says the district was aware of a rise in violent incidents on the campus after the Board of Trustees eliminated the school resource officer program in July 2020, and about a lack of security cameras that left areas of the school uncovered.

The family is also suing for wrongful death and emotional distress for the Aptos High student, who was 17 when he died.

The attack occurred Aug. 31, just after classes ended for the day. The suspect and another student identified in the lawsuit as I.R. attacked their peer behind the school’s gymnasium as he waited for his sister to pick him up. During the attack, K.O. stabbed him with a knife, Piccuta says.

No school employees were in the area, he says, and no cameras covered the area, a fact that was well known to staff.

“Defendants were aware of this because teachers had complained about the lack of supervision over students and disruption of classes caused by students who remained on campus and did not have classes at that time,” Piccuta states in the lawsuit.

According to the lawsuit, the student’s sister arrived soon after the attack and saw him staggering toward her. She saw no staff present and called 911.

Staff members, including a nurse, arrived several minutes after that. The nurse, according to Piccuta, offered no medical help except to tell the student to lie flat.

He was airlifted to a medical center, where he later died.

According to Piccuta, the defendants had a duty to inform law enforcement about the previous incident involving K.O. under district policy and California mandated reporter laws.

They also shirked in their duty to “identify appropriate locations for the placement of surveillance cameras,” the lawsuit states.

Piccuta also says that both PVUSD Board Policy and state law require the district to remove anyone from school grounds that poses a safety threat.

“The mid-August assault of another student by K.O., who brandished and/or cut the other student with a knife amounted to child abuse by K.O.,” Piccuta states.

After the attack, the PVUSD Board of Trustees reinstated the school resource officer program, and Watsonville Police officers have since returned to Pajaro Valley and Watsonville high schools. Additionally, a Santa Cruz County Sheriff’s deputy recently returned to the Aptos High campus.

PVUSD spokeswoman Alicia Jimenez said Friday that the district had not yet been served with the lawsuit.

“When the lawsuit regarding this matter is received by the District, it will be given to the District’s legal counsel for appropriate next steps,” she said. “As this is a litigation matter, the District cannot comment further on this case other than to offer our sincere sympathies to the family.”