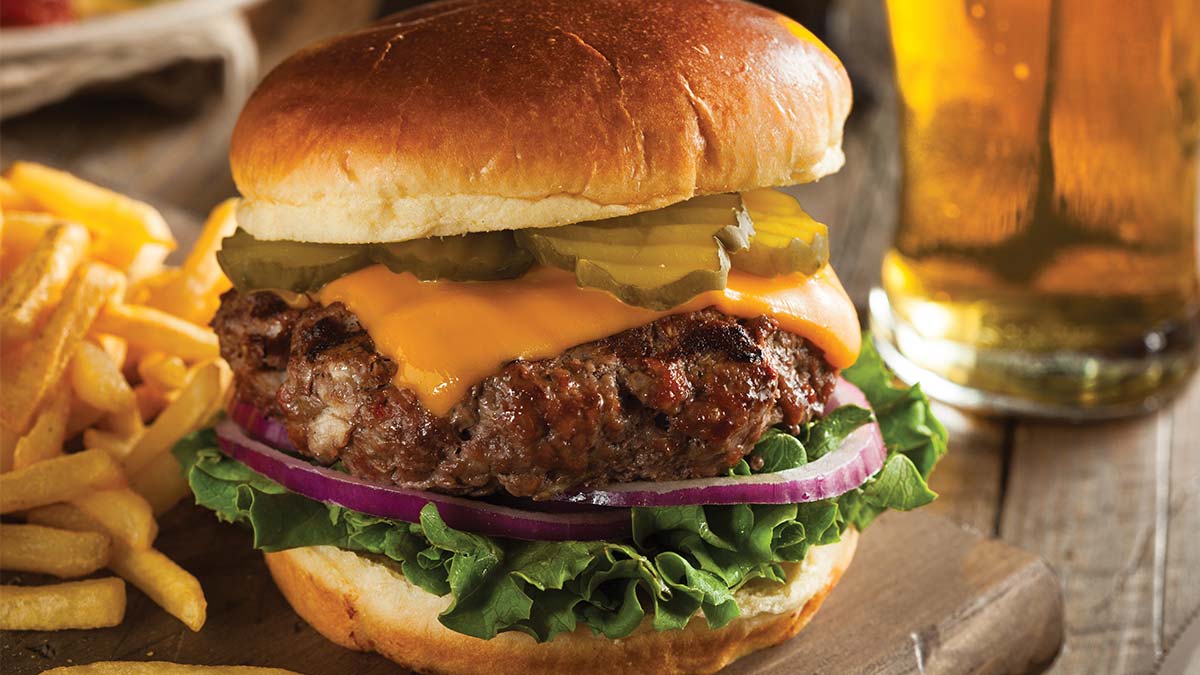 A few years ago, blogger and gardener Waldo Jaquith set out to produce a farm-to-table cheeseburger entirely from scratch. He even thought he’d write a book about the ordeal.
But ultimately, he gave up. “Further reflection revealed that it’s quite impractical—nearly impossible—to make a cheeseburger from scratch,” he wrote. That’s in part because the ingredients of the cheeseburger as we know it are all in season at different times of the year. Plus, “It would be wildly expensive—requiring a trio of cows—and demand many acres of land. There’s just no sense in it,” he wrote.
Nevertheless, Americans consume an estimated 50 billion burgers a year—a figure that could not possibly be so high without our industrialized, post-agrarian food economy.
From an environmental standpoint, the beloved burger remains among the least-green menu choices one can make: Cows emit between 2.5 and 4.7 ounces of methane for each pound of beef produced—and about 13 times more global warming gases than chicken, pound for pound, according to a 1999 study at the University of East Anglia in England. Livestock accounts for about 18 percent of global greenhouse gas emissions globally, including 65 percent of human-related nitrous oxide and 35 percent of methane, which have 296 times and 23 times the global warming potential of carbon dioxide respectively. It takes more than 3,000 gallons of water to produce one pound of beef, according to the Water Footprint Network, though estimates vary depending on how far back you look in the production line.
But while the debate over whether grass-fed or grain-fed beef is better for the environment is a heated one, the debate over which is healthier for the human body is more conclusive.
The average feedlot cow eats 2,800 pounds of corn or grain during the “finishing period” of its short life, enabling it to put on about 1,000 pounds in a few months. (This may include organic beef, which is simply fed organic grains during the finishing period.) The problem with grain-fed meat lies in its omega-6 to omega-3 ratio; which can be as high as 20-to-one, and omega-6s are pro-inflammatory, says Dr. Dawn Motyka of KUSP’s Ask Dr. Dawn radio show.
“When you put animals in a pen, you’re increasing omega-6s, and you’re also increasing the saturated fat, which is also inflammatory,” says Motyka, who says she eats only grass-fed meat about once every two weeks, since she knows it’s not an efficient conversion of protein.
“When you eat game animals that live on grass, the actual cell walls and cell membranes of that meat are rich in omega 3 fatty acids,” says Motyka. “And the ratio in the meat is about two-to-one, two omega-6 to one omega-3. That more closely resembles our ancestral diet.”
While studies confirm that omega-3 is about twice as high in the meat of grass-eating cows, it shouldn’t really be used as a marketing ploy: grass-fed beef averages about 35 milligrams of healthy omega-3 per serving. Compare this to 1,100 milligrams of omega-3 in a serving of salmon.
Grass-fed beef also contains more vitamin E and conjugated linoleic acid—all beneficial to human health—and is slightly lower in saturated fat. “All meats, whether it’s grass-fed or free range or corn fed, have a lot of saturated fat,” says Motyka. “But in general, free range meat is more muscle-y, and has less fat than farm-raised.”
Grass-fed cattle are not typically given antibiotics (though this isn’t guaranteed unless it’s organic), while it’s standard for cattle in “concentrated animal-feeding operations” (CAFOs) to get a side of antibiotics with their grain. Why? According to Dr. Andrew Weil, (who happens to be a vegetarian), the need for antibiotics results from the fact that cows are not adapted to digest grains—it wreaks havoc on their digestive systems and results in alterations in the natural flora of their gastrointestinal tracts. In a 2016 test by Consumer Reports, 18 percent of samples of conventional ground beef and 9 percent of samples from sustainably produced beef were contaminated with antibiotic-resistant bacteria.
“When you have a hamburger, that’s essentially meat paste, and bacteria can spread very rapidly,” says Motyka, who says she sees lots of food-borne illnesses in her practice. Cooking a burger well definitely helps cut down on the bacteria, but it also may produce more polycyclic aromatic hydrocarbons, which are carcinogenic. “If you’re going to eat meat, it should really look like a piece of muscle,” says Motyka.
Yeah, but, sometimes we just really want a burger. Because we are hungry, because we are spoiled Americans, because it’s Tuesday. In that case, I recommend paying a little extra for the luxury and heading to Motiv’s Ulterior, Gabriella Cafe, 515 Kitchen & Cocktails, or burger., which all serve (delicious) grass-fed burgers. But remember, the healthiest burger—for the planet and for your body—is, alas, a veggie burger.