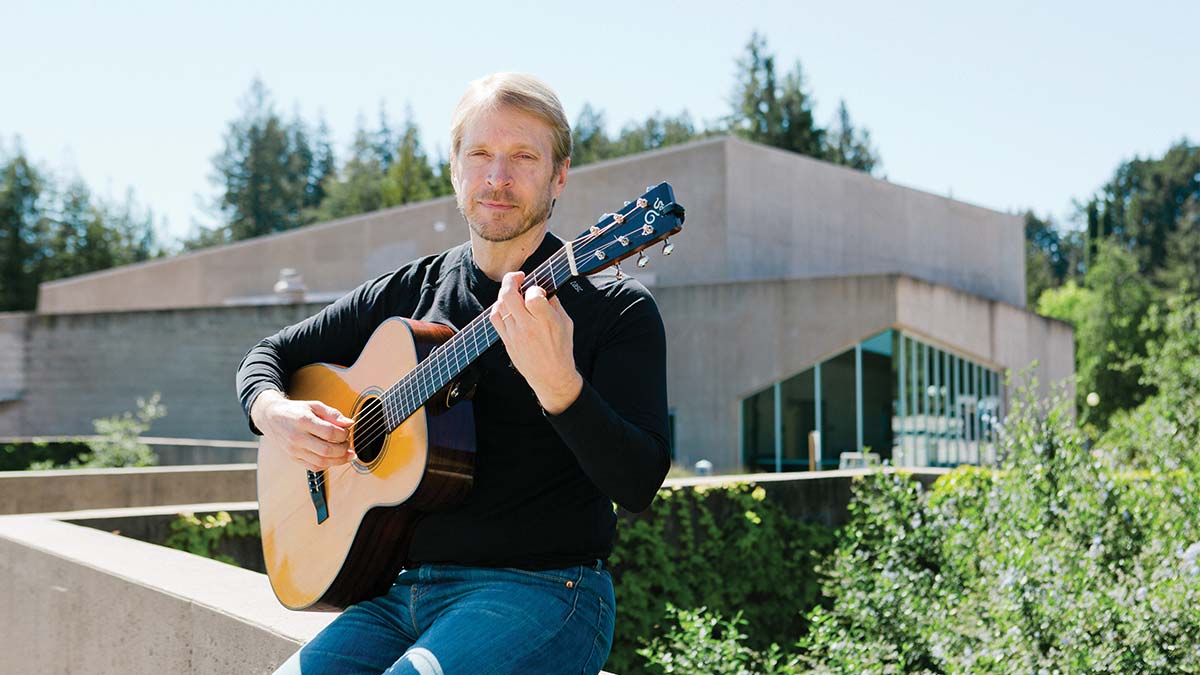 If you were in Santa Cruz during the 1980s, you couldn’t have resisted the lilting music of Isle of Skye. At the center of the accomplished quartet, which seemed to play every venue available, was guitarist William Coulter, he of the blond hair and the dancing fretwork. Committed to Celtic music, Coulter found his calling a few decades ago and never looked back.
Originally from New Jersey, Coulter came out to Santa Cruz to attend UCSC, where he now teaches classical guitar. As Coulter grew up, he says “everything was about classical music.” His father had founded a choral group that performed in Carnegie Hall. “We had a harpsichord,” Coulter says. “I grew up surrounded by classical music and instruments.”
After high school, all three of his siblings headed for California. “My brother Steve left a note on the refrigerator. It said ‘Go West Young Man!’” And so he did. Music beckoned seriously in 1984. “My brother Steve, who plays Celtic harp [and teaches in the UCSC Writing Program], inspired me to pursue it,” says Coulter. “We formed Isle of Skye—my brother, me, Chris Reader on fiddle, and singer Beverly Slade.” Armed with hammered dulcimer, harp and guitar, the group played old Irish and Scottish music at Caffe Pergolesi and the Saturn Cafe. “Our gigs were mostly local,” Coulter says.
“Still, I always had a strong feeling for classical music,” he says. “Even during the folk music phase, I never got over my love of classical music.”
Next came a bachelor’s degree in music at UCSC, thanks to the mentorship of harpsichordist Linda Burman Hall. “Women have always been angels in my life,” he admits, with a wild Irish rover grin. Next came an MFA in classical guitar performance from the San Francisco Conservatory, followed by a second master’s in ethnomusicology from UCSC.
After a trip to Ireland, Coulter went to Portland, Oregon to study with the brother of Celtic music icon Enya. Irish music had devoured him.
The old tunes cast a deep spell, at once haunted and haunting in their mournful beauty. Coulter felt the allure. “I love it. I listened to a lot of Bach when I was young, much of it contains a dance energy—the Brandenburg Concertos, for example. Irish tunes have that same driving energy,” Coulter says. “That’s what moves me. The dance vibe.”
Coulter updates the music he collects from living performers. “I’m not the ‘keep the tradition alive’ artist,” he admits. “I’m more the interpreter and arranger. I make instrumental arrangements from songs.” The melodies, the Irish language—“the sound is old and beautiful to me,” says Coulter. “I listen to contemporary Irish singers. I make arrangements of these melodies. I work with these and make them my own.”
Coulter happily confesses to taking “a classical California pop approach to making Irish my own.” Nine out of 10 Irish singers took their material from other sources, he reminds me. “My experience has taught me that the real tradition is to have the music live on and move on—not be in a museum,” he says.
Restless and generous in his performing, Coulter plays and tours with several groups from two to three months out of the year. One is called One Lane Bridge, “with John Weed on fiddle, me on guitar, and Aria DiSalvio on cello. We perform folk music from Galicia, Brittany, Scandinavia, Ireland, and America.”
With Coulter’s intricate and driving guitar at the center of the music, the trio’s sound is enchanting and lilting. And more. He’s recently formed a new duo with Edwin Huizinga called Liquid Gold, which he describes as “virtuoso violin meets Celtic guitar” performing arrangements of Bach and Vivaldi, as well as Bulgarian and Swedish folk music.
William Coulter won a Grammy in 2005, and he continues to orchestrate performance triumphs. He just completed a residency with the Omaha Symphony, where, as visiting artistic director, he created a lavish production called “Celtic Journey.”
“I spent a year building that show—arranging music for traditional musicians, dancers and a storyteller, including an 80-piece orchestra. We had two sold-out shows,” he says, beaming. The prospect of producing more Celtic Journeys is tempting. “It might be that I go on for years doing it with many orchestras. I can reproduce it locally, using local musicians and dancers,” he says.
Seasoned performing artists like Coulter exist in a landscape of networking. He can show up anywhere with his guitar and immediately attract collaborators.
“I feel so ridiculously blessed by how I’ve lived my life,” he grins. “Music never ends—there’s always more to learn. That’s the beauty of it.”

Next ArticleFired Up at Pizzeria Avanti