.Feel the Burn: Burn Hot Sauce Spices It Up 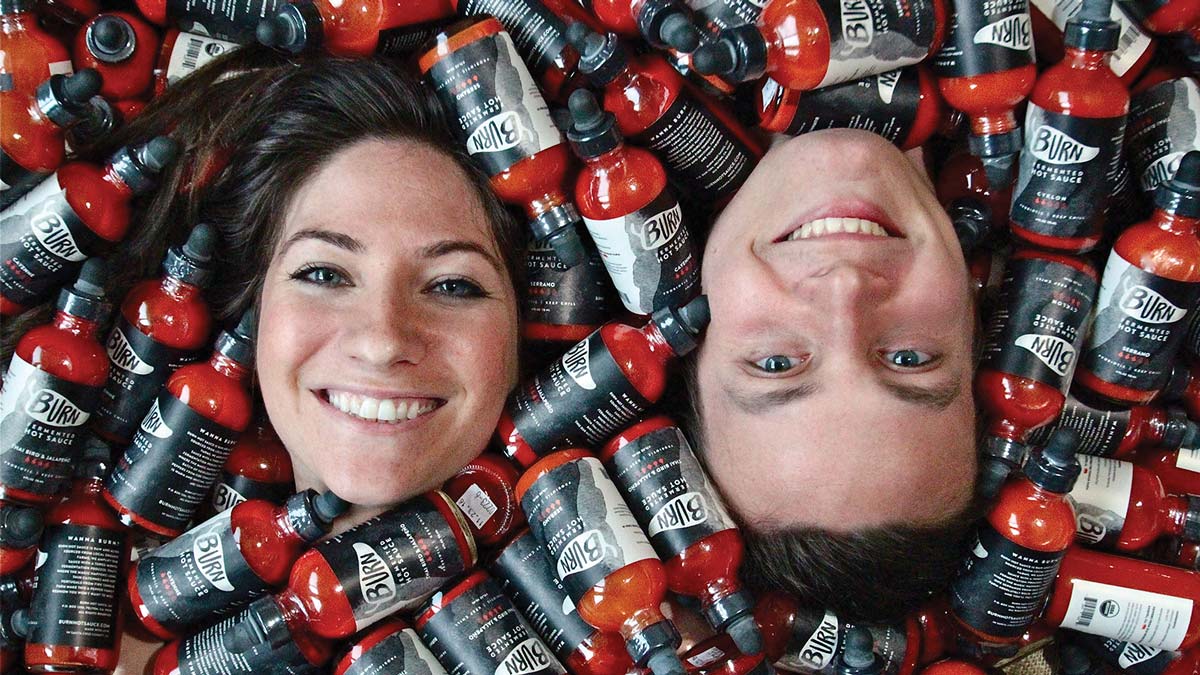 I’m addicted to the sauce. I blame my friends, who pushed me toward an attractive stranger and told me to stick out my hand. I warily obliged, and she dispensed a drop on the pad of my index finger, thick and red as blood. I put it to my mouth, and flavor bloomed, followed by a rising heat. Everything changed. I needed more.
Burn Hot Sauce has ruined me for all other hot sauces. Vibrantly hued, the four “flavors” are heirloom pepper varieties, so one can really taste the nuances of the pepper and the land on which it was grown—the terroir, if you will, of the Thai bird, Hungarian cyklon, serrano and cayenne. The heat blossoms slowly, and is intensely flavorful, never aggressive or overwhelming (unless you’re slathering it on everything in sight, like yours truly).
Each single-origin sauce is made from organic, California-grown peppers, water and sea salt, and fermented raw for three to six months before being blended and packaged into medicinal dropper bottles. As someone who has an entire shelf in her fridge devoted to spicy condiments, this stroke of genius blew my mind. The dropper not only allows the consumer to control how much sauce they put on their pizza, eggs or tacos, it completely eliminates the dreaded crusty hot sauce rim.
Burn is the brainchild of partners Amanda Pargh and Chase Atkins, who live in Felton and ferment and package their sauce at the El Pajaro Commercial Kitchen Incubator in Watsonville.
In 2014, the day before Pargh was set to begin working in the kitchen at Manresa (after stints at Yountville’s prestigious Ad Hoc and Los Angeles’ Animal), the Michelin-starred restaurant caught fire. Having recently relocated from Sonoma, she and partner Chase Atkins began farming and teaching at Love Apple Farms while waiting for the remodel. Surrounded by produce and fermenting anything she could get her hands on, a windfall of serrano peppers inspired Pargh to make hot sauce and give it to friends. “People were calling us up, saying ‘What was that! I’ve never had anything like it. I need more! My eggs aren’t the same!’” says Pargh. “Chase said, ‘I think we’re on to something.’”
Having left the restaurant world to focus on Burn for the time being, the couple says they’re thrilled at how well their product has been received. “We were expecting demand, but we’re getting such positive feedback that our only real concern this year is running out,” says Pargh.

Burn Hot Sauce is available at the New Leaf Market in Felton, the downtown Farmers Market starting March 16 and on etsy.com. burnhotsauce.com

Next ArticleWhat’s the toughest job you’ve ever had?