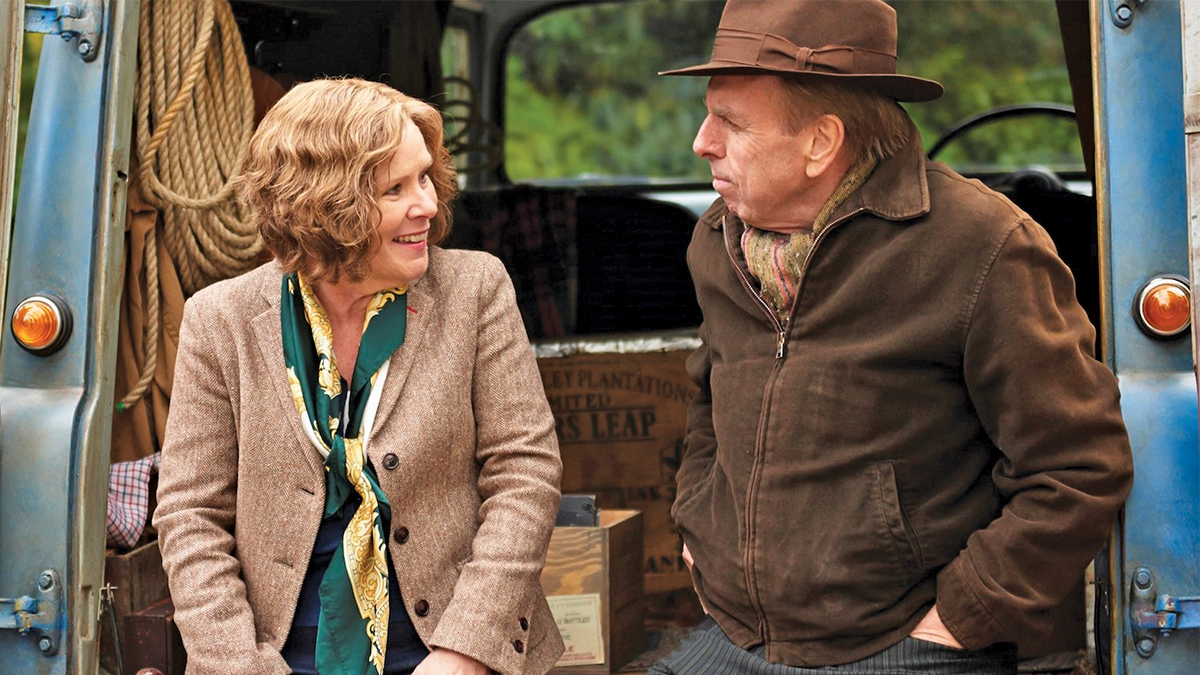 Aging actresses don’t fade away in the British film industry—they just keep getting better parts. Case in point is Finding Your Feet, a comedy in which a woman of a certain age is slapped upside the head by Fate, and has to try to reinvent herself, with the help of her estranged, Bohemian sister and her plucky friends. Plot-wise, it all sounds terribly formulaic, but a terrific cast of veteran players, some genuine laughs and moments of unexpected poignancy turn it into a surprisingly effective crowd-pleaser.

Written by Meg Leonard (racking up her first screenplay credit after years as a producer and casting director) and Nick Moorcroft, the movie was directed by Richard Loncraine (My One and Only). The story begins at a lavish party at a stately English country home presided over by perfect wife Sandra (Imelda Staunton), to celebrate the retirement of Mike (John Sessions), her politician husband of 35 years. But her own plans for their idyllic new life together out of the public eye are dashed when Mike is discovered in an anteroom canoodling with his longtime mistress.

Furious, Sandra storms off unannounced to the cluttered London flat of her older sister, Bif (Celia Imrie), an artsy type given to progressive political causes. The sisters haven’t seen each other in 10 years, but Bif is ready to provide moral support for her distraught sib—even though Sandra insults her friends, her messy flat, and her working-class neighborhood, and insists on being addressed as Lady Abbott. “She used to be fun,” Bif laments to her friend, Charlie (Timothy Spall).

You don’t need GPS to tell you where we go from here. Bif (so named from a childhood mispronunciation of the name “Elizabeth”) is determined to thaw her uptight sister and put Sandra back in touch with her fun, youthful self. Inspired by an old home movie of the child Sandra in a ballroom dancing competition, Bif persuaded her reluctant sister to come to the seniors dance class she attends every week.

There, Sandra meets Bif’s pals, including shy, sweet Ted (David Hayman), and much-married Jackie—a part tailor-made for the great Joanna Lumley, tossing off wisecracks with her usual aplomb. (Her last marriage ended because of “religious reasons,” Jackie says. “He thought he was God. I didn’t.”) Sandra does start to loosen up, although her grandiose airs have made a particularly bad impression on Charlie, a handyman who makes house calls in his dilapidated van, and lives on a barge at the edge of the river.

Yes, the story is predictable, but these veteran players provide unexpected emotional depth in even the simplest encounters. Imrie and Staunton (who’s played everything from sympathetic abortionist Vera Drake to an evil headmistress in the Harry Potter series to one of Sleeping Beauty’s fairies) revel in playing grown-ups with a long history of life lived; they’ve earned every wrinkle in their faces, and the camera dotes on them. And Spall (last seen as the befuddled, errant husband in The Party), that most unlikely of romantic heroes with his shambling gait and weary good cheer, infuses Charlie with soulful presence as he quietly endures his own unfolding tragedy.

There are some suspect plot choices, particularly a crucial bit of information that Charlie chooses to withhold from Sandra (although the viewer is led to believe she already knows about it). And while it’s very moving when Bif relates a tale of her own early, lost love, the effect she claims it’s had on her life ever since is so contrary to the way her life-embracing character has been developed, it just feels like a plot device. Invited to perform onstage at a dance fest in Rome, the class’s humble street routine acquires an almost silly degree of Vegas polish (although the shout-out to “Sisters” from White Christmas is fun).

Still, this is a frisky charmer of a movie, with a stunning final image that will leave you cheering.