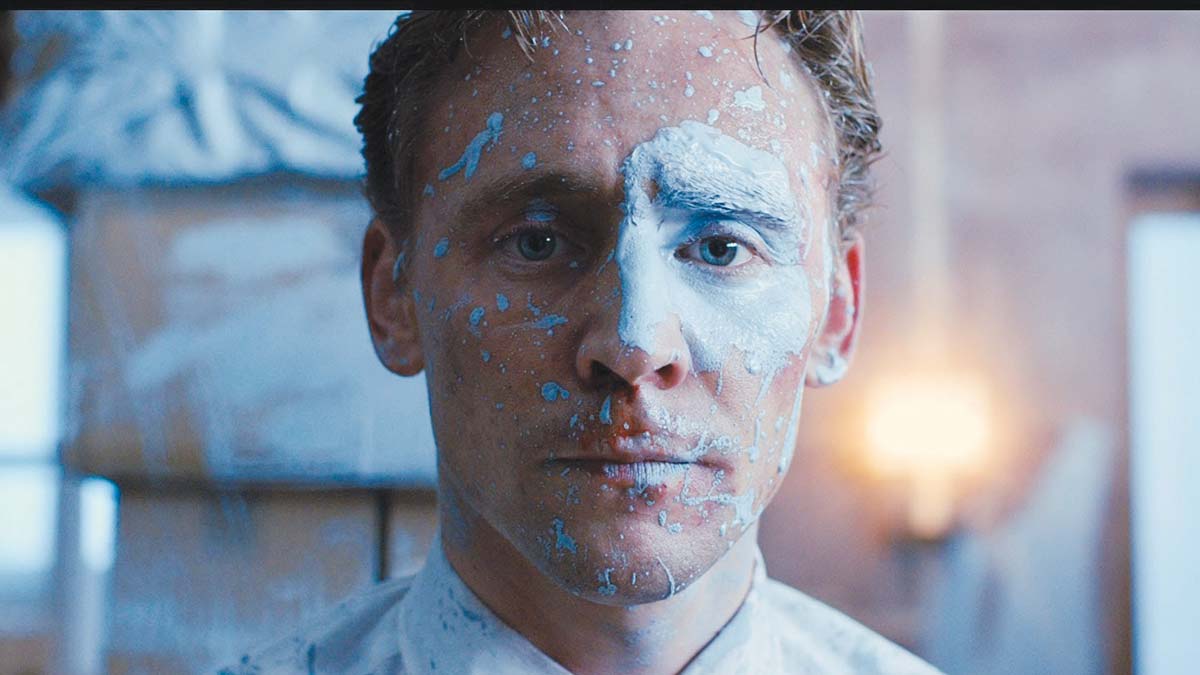 Rumor has it that Tom Hiddleston will be the next James Bond. Too bad, in a way—Hiddleston is far too interesting and versatile an actor to be trapped in such a one-dimensional role. (Although, I was impressed at how Daniel Craig managed to revitalize the part, and the franchise.) But if Hiddleston does step into Bond’s Aston Martin, he probably won’t make too many more bizarro movies like High-Rise.
Not exactly another (dreary) dystopian future story, High-Rise is an allegory of class warfare set within a 40-story apartment building in a bleak London subdivision. Separated from its neighborhood by acres of parking lot and an expressway, the building’s community of residents has evolved organically—the rich at the top, the working class on the bottom. And with no outside interference, the community becomes a law unto itself: the law of the jungle, it turns out, as soon as things start to go wrong, from the ground up.
Director Ben Wheatley and scriptwriter Amy Jump adapted the story from a 1975 novel by J. G. Ballard, an author known for his experimental science fiction. Filmmaking team Wheatley and Jump adopt Ballard’s time period: the men sport unfortunate side-parted flips and bad moustaches, the women clomp around in platform pumps, and everyone smokes incessantly. Technology consists of shoulder-braced videocams and piano-key tape recorders, with nary a smart phone nor laptop in sight. The film is set squarely at the dawn of the Thatcher era in Britain, as the divide between the haves and have-nots begins to widen.
Into this peculiar world steps Dr. Richard Laing (Hiddleston), who moves into a slick concrete, stone and steel apartment on an upper floor of the high-rise. (Hiddleston, clean-shaven and short-haired, doesn’t seem to have gotten the memo about the ’70s look, except for a discreet flare to his suit pants.) Quiet and reserved (when not gleefully peeling the skin off the head of a corpse to expose its skull to his students), Laing gamely tries to “fit into his slot” in the community.
He’s befriended by sexy Charlotte (Sienna Miller), who lives on the floor above, and Wilder (Luke Evans, in possibly the movie’s worst haircut). A would-be documentary filmmaker, Wilder is a rabble-rouser who lives on a lower floor with his sweet, enormously pregnant wife, Helen (Elisabeth Moss) and their kids; when the swimming pool mid-level is closed to them, Wilder leads an army of kids from the lower floors to occupy it.
Soon, Laing is also befriended by the architect of the building, Mr. Royal (Jeremy Irons). At the top of the heap, Royal’s plush penthouse suite includes a rooftop garden the size of a football field, complete with sheep, and the white horse belonging to his wife, (Sienna Guillory), who likes to dress up as Marie Antoinette. Laing and Royal start playing squash together, and from his unique perspective, moving among the lower and higher orders (although accepted only grudgingly by Royal’s sycophants and henchmen), Laing realizes that the entire complex is some sort of weird psychology experiment.
We do, too. Which is not such a bad thing, but the middle of the movie devolves into a lot of rich-vs.-poor clichés (the rich discuss “Balkanizing” the lower and central floors to play them against each other). And as crises like malfunctioning trash chutes, power outages, and spoiling food at the in-house grocery start to affect all levels, relentless, primal violence and candlelit orgies ensue. (All the incidental naked bodies remind us of movies actually made in the post-code ’70s, when filmmakers showed lots of nudity just because they could.)
It would be one thing if Laing’s discoveries led him to some sort of action. But he’s happy to embrace the “weird hierarchy” of the status quo; he does, belatedly, draw the line, but otherwise abstains from moral judgment, and sleeps with whichever women make themselves available to him. We all devolve into our worst selves, if given half a chance, the movie argues, but the viewer is not quite invested enough in any of these characters to find this tragic.