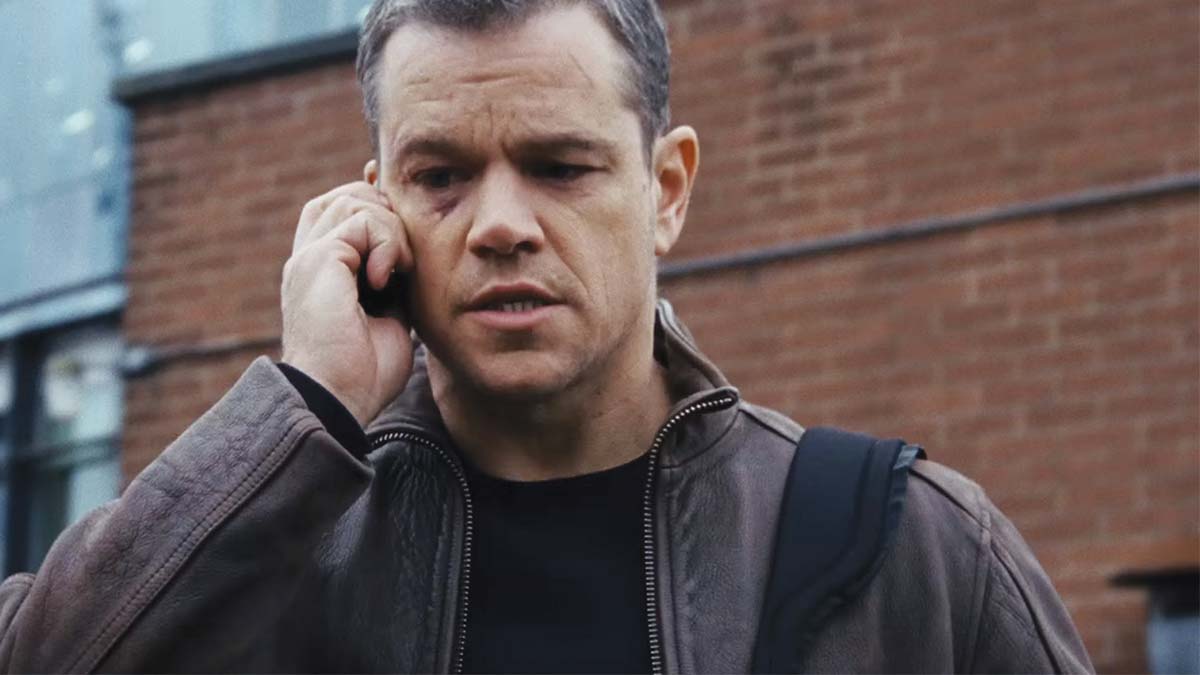 Bereft of humor or sex, the Bourne series gives audiences a choice of brands. If James Bond is Fodor’s, Bourne (Matt Damon) is Lonely Planet. But is it really fair to call this series grittier or more mature than 007.
The last Bourne introduced super-soldier pills: “chems,” they were called. This fifth movie based on the adventures of Robert Ludlum’s assassin gives us a morose Damon in front of barely seen cities, identified with captions, such as “London, United Kingdom.” It’s clipped into snippets of graffitied walls, trains, trams, stomped gearshift pedals and startled crowds.
As a former documentarian, director Paul Greengrass is a great believer in the swiftness with which violence occurs. He might agree with Mao’s principle: “The guerrilla must move through the people as a fish swims through the ocean.” Bourne saves himself by hiding in packs of city people. This saves him during the film’s best scene, an attempted hit on CIA turncoat Nicky (Julia Stiles) during the middle of a night riot in Athens. Bourne plucks flaming Molotov cocktails from the hands of demonstrators and escapes, via motorcycle, down staircases.
The posters, swiping a vintage Bond tagline from the Timothy Dalton days, say: “You know his name.” The joke is, Bourne doesn’t seem to know his own name, having given up his identity for this codename. Many would conduct an investigation with stealth, but when Bourne wants to have a quiet chat with a reluctant former spook (Bill Camp), the man is hauled to a roof, after Bourne sets off a fire drill for most of North London. The milling crowds complicate the work for an implacable sniper, a hawk-nosed scowler referred to as “Asset” (Vincent Cassel).
Then it’s off to “Silicon Valley, USA.” We’re here to meet Aaron Kalloor (Riz Ahmed) the liquid-eyed and benign CEO of Deep Dream, some kind of search engine/social network with a billion users. Kalloor’s latest project is to be unveiled at Exocon in “Las Vegas, Nevada.” Unfortunately, the CEO has unfinished business with CIA thug Dewey (Tommy Lee Jones), who, in his insane desire to keep things as public as possible, threatens Kalloor into compliance at a crowded restaurant. Jones is a sight these days; eyes sunk into nasty puckered orifices, ears as long as Confucius’ in a Chinese painting. Dewey is continuing the creation of those CIA black-ops programs that sound like Napa wineries: “Treadstone,” “Blackthorn” and the new and most scary, “Ironhand”—wasn’t Ironhand a Get Smart villain?
Suffering under Dewey’s sexist patronization is CIA analyst Heather Lee, played by Alicia Vikander. Her rich brown hair is cruelly clamped back, and she has a pout that makes her look like a pint-sized and unhappy replica of the Statue of Liberty. She has grounds for glumness. Dewey keeps patting her on the back with his scaly hand.
Few movies will cut from the “Greek/Albanian border” to “Reykjavik, Iceland,” and that’s the thrill of espionage movies right there—they give the sense of a globe girdled with spies. The surveillance never stops, with closed-circuit cameras measuring facial metrics worldwide. In such situations, you can always tell the computer operator: “enhance.”
Of course, even the enhancement doesn’t always help. “Sir, the Asset has landed,” Dewey is informed. But where has he landed? Germany? London? In the name of speed and percussion, Greengrass chops it up, even zooming to put some urgency into a moment of a person sitting and thinking. Editor and co-writer Christopher Rouse cuts a scene of Bourne getting into a Berlin taxi into three angles. It’s not like we saw this scene and said “Enhance.”
The crazily realistic editing makes the finale a cubist fantasy of destruction. Bourne uses a Dodge Charger to mop up the traffic on the Strip, in pursuit of Asset. Sadly, it’s not as beautifully legible as in the trailers. We hear a CIA agent claiming “We’re still trying to put together a narrative to explain what happened.” Good luck with that.

Next ArticlePreview: Nina Simon’s New Book ‘The Art of Relevance’