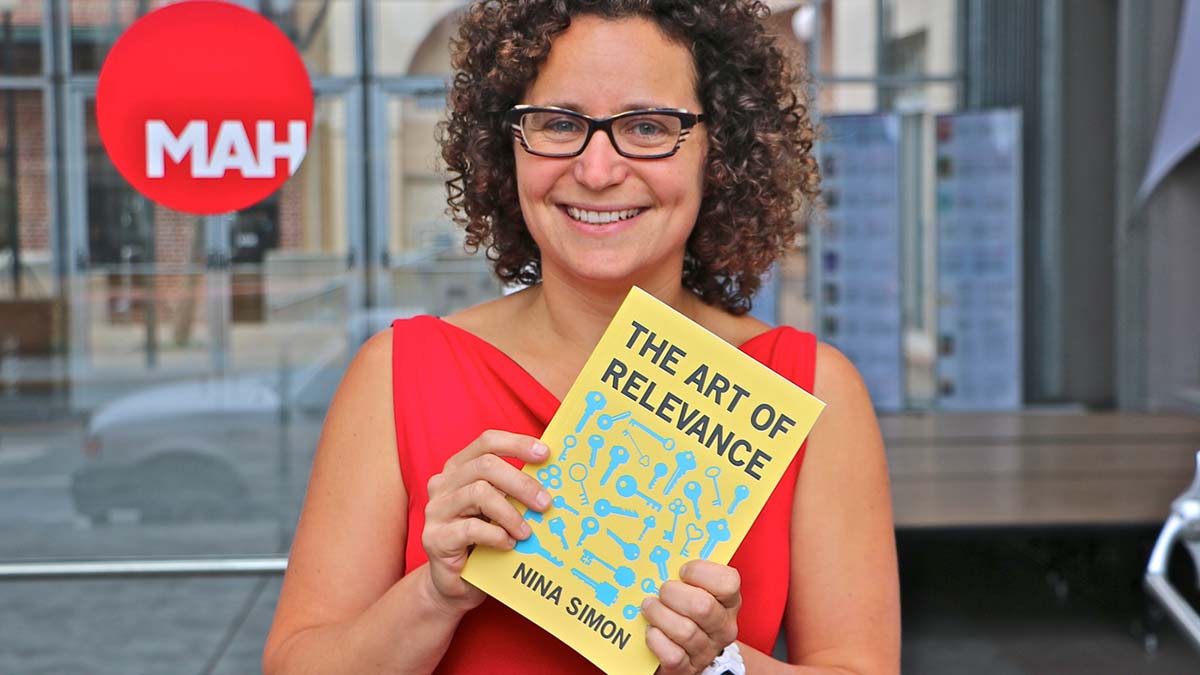 In 2015, the Museum of Art & History (MAH) hosted two exhibits simultaneously: Dear Jerry, centered around the Grateful Dead, and Princes of Surf, an exhibition about the Hawaiian princes who brought surfing to Santa Cruz. MAH Executive Director Nina Simon thought both exhibits were relevant to the Santa Cruz community, but she was “absolutely blown away” by the community’s powerful, emotional reaction to Princes of Surf. It was, she says, “qualitatively different” than the response to Dear Jerry.
That dichotomy set Simon on a quest to find out what makes one project more relevant than another. The result is her new book, The Art of Relevance. An exploration of how to connect people in meaningful ways, the book contains stories of more than 50 organizations and projects, including several from Santa Cruz County.
Simon spoke to GT about the challenge of becoming—and remaining—relevant.
I’ve never given the word ‘relevance’ as much thought as I have since reading your book. Tell me about the importance of that word to you.
NINA SIMON: I felt exactly the same way you did when I started. I give talks at conferences in the arts, but also libraries and national parks. I started hearing that word come up again and again. I thought it was fascinating that, on the one hand, it’s amazing that these entities want to be more meaningfully engaged with their communities, and, on the other hand, it’s a little bizarre that we were hanging our hats on a term that is pretty ill-defined.
The book, while geared toward community builders and leaders of organizations, has insights for people in any field. Who’s your intended audience?
I think of it as people who have a mission in mind. The largest group is people who work in nonprofits—not necessarily arts and culture nonprofits, but people who are doing mission-driven work, who have a community service component of what they do. That includes churches and businesses. It’s pretty open in that way.

You write about keeping the people you want to serve in mind when dealing with pushback from those who don’t want things to change. How has that vision helped you and your team transform the MAH?
It was absolutely necessary. The board that hired me said, “We want this to be a thriving community center, and we want you to execute that vision.” We knew that to do that, we needed more people to value the MAH, and we needed people from different generations, ethnicities, backgrounds, interests, to find a place for themselves here. Those people were not necessarily already inside the door, so we had to go out to where they were and say, “What do you value, and how can we change what happens here in a way that’s going to make this place more welcoming to you?”
Making an organization such as yours relevant to underserved communities can be an even greater challenge. You offer numerous tips on inviting people in, but if you had to distill it down, what would the key takeaway be?
First, listen and honestly believe it when people say that your offering is not relevant to them. I think sometimes we theorize that it’s just because we’re just not open at the right time, or it’s the price. But there are totally legitimate reasons that some people go to rock concerts and some people go to the opera, some people go to tattoo parlors and some people go to CrossFit. We are making choices all the time about what’s relevant to us. Once you embrace that reality, the most important thing to do is to say, ‘Here’s the community I’m interested in engaging, let me go be a guest in their community. Let me go to their events, to their spaces, to their businesses’—not with something to offer, not with something to pitch or to sell, but ready to learn what they value, what they’re passionate about, what they’re great at. If an institution can value, and really understand, how people make meaningful connections … then you can say, I’m going to build on what that person values, I’m going to invite them in for their reasons—not mine—and I’m going to try and form a meaningful connection based on mutual respect for our respective values and expectations.

Nina Simon will read from and discuss her new book ‘The Art of Relevance’ at 7 p.m. on Thursday, Aug. 11 at Bookshop Santa Cruz, 1520 Pacific Ave., Santa Cruz. Free.