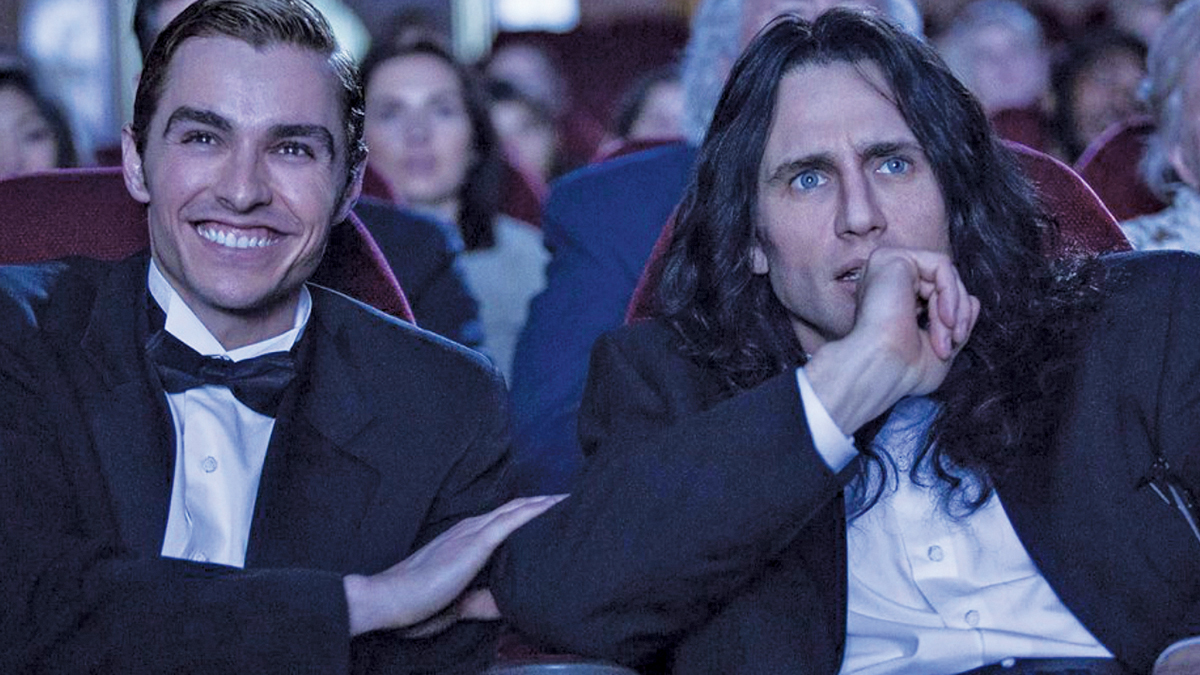 The most delirious scriptwriter could never invent a character like Tommy Wiseau. With his eccentric speech and long, dyed-black hair; of indeterminate age, means or national origin; and pretty much devoid of any actual talent, he became one of the most renowned filmmakers of the new millennium in 2003, as writer, producer, director, and star of The Room, considered by many to be the worst movie ever made. Move over, Ed Wood.

With that single act of abomination against the annals of cinema history, Wiseau has become the international poster boy for pursuing one’s artistic vision—however crackpot it may be—in the face of all obstacles. Since The Room became an instant midnight movie favorite, Wiseau is now such a legendary cult figure that a movie has been made about him: The Disaster Artist, a giddy, lightly fictionalized adaptation of a nonfiction book about the making of The Room.

The book was co-written by Greg Sestero, Wiseau’s friend and real-life co-star of The Room, who was there every step of the way. The Disaster Artist is directed by James Franco, who also stars as Wiseau in a performance of fascinating weirdness. If the real Wiseau wasn’t up there in the spotlight for all to see, Franco might be accused of excessive eccentricity, swanning around with a lazy, affected drawl of some sort, looking like a cross between Tiny Tim and Vlad the Impaler. But Franco also manages to expose the occasional raw nerve of a lost soul yearning to fit in.

In a San Francisco acting class, 1998, the teacher urges shy young student Greg Sesteros (nicely played by the director’s brother, Dave Franco) to put more emotion in his readings. Next up, fellow student Tommy Wiseau does the “Stella!” scene from A Streetcar Named Desire—shrieking, rolling around on the floor, and literally climbing the walls. The rest of the class is stunned into horrified silence, but Greg has found a mentor.

Tommy is older (he won’t say by how much) and coy about his personal history, and he embarrasses Greg, making him act out a dramatic scene in the middle of a coffee shop. But Greg is mesmerized by Tommy’s chutzpah. When Tommy suggests they move together to L. A. to break into Hollywood, Greg is thrilled.

They get headshots made and go to auditions. But while Greg picks up an agent (a funny cameo by Sharon Stone)—whom he rarely hears from again—they get no work. Tommy is criticized for his “malevolent presence,” and is told by a producer he interrupts at dinner that “Just because you want it doesn’t mean it’s going to happen for you.” So they decide to make their own movie instead, Tommy hammering out a bunch of loosely connected melodramatic crescendos disguised as a script.

Foreknowledge of The Room is not essential, but viewers interested in backstage Hollywood will get the most out of this one. Not everything makes sense (like why, exactly, no water is available for the crew on set), but things build to a nifty conclusion: at the premiere, when the audience goes berserk with laughter, Greg pep-talks the crestfallen Tommy into accepting credit for the way he has entertained them—credit the real-life Wiseau has been embracing ever since.

Over the closing credits, when we long to see a couple of clips of the real Wiseau in action, director Franco instead plays snippets from the original movie in split-screen with the same scenes he’s recreated; with actors speaking the same lines at the same time, it’s garbled and confusing. But otherwise, this is an affectionate look at outsiders amok in the Hollywood dream factory.

With James Franco, Dave Franco, and Seth Rogen. Written by Scott Neustadter and Michael H. Weber. From the book by Greg Sestero and Tom Bissell. Directed by James Franco. An A24 release. Rated R. 103 minutes.

Previous ArticleMediterranean Flavors Make Happy Hour at Mozaic a Must

Next ArticleLove Your Local Band: Jacob & The Ghost Train