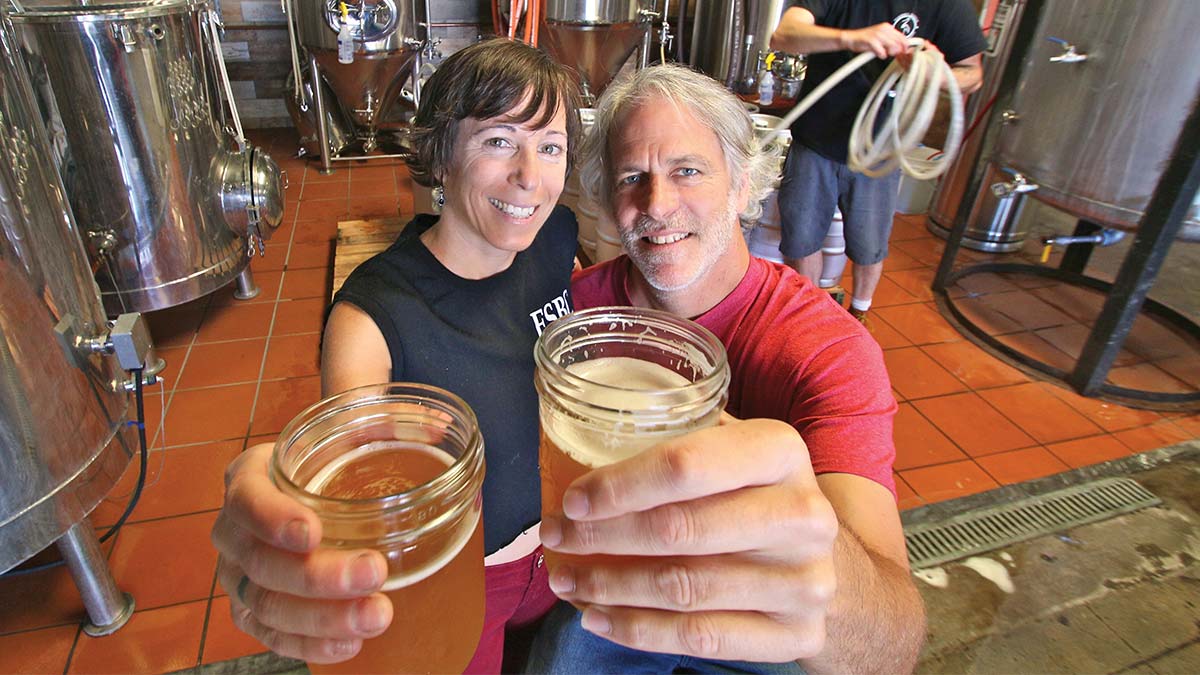 Last Saturday, a stream of thirsty customers made their inaugural visit to Elkhorn Slough Brewing Co. to investigate Watsonville’s first brewery. From the steady congratulations bestowed upon owners Julie Rienhardt and Michael Enos on their opening weekend, this day had been eagerly anticipated.
I was looking forward to visiting the brewery myself, having had the opportunity to enjoy some of its small-batch beers at local taprooms in Santa Cruz over the last few months. The craft brewery is located in a high-ceilinged warehouse in an industrial park off of Airport Boulevard, a short distance as the heron flies from its nearby namesake estuary.
A chalkboard menu and a short bar welcome guests as they enter through a roll-up door. A modest three-barrel brew house hugs the back wall, and a smattering of upturned barrels, picnic tables and much-loved furniture fills most of the space. It’s cozy, and thankfully cool on a hot day, especially with a glass of lemony, grassy Low Tide saison in my hand, and my friend’s dog snoozing at my feet.
But what really captured my interest was a neat row of oak barrels lined up on the opposite wall under decals of cranes leaping into flight. Inside them is beer, delicious beer, slowly maturing in its port, whiskey, or wine-infused casing, while yeast—which began its life on apples from Rienhardt and Enos’ property—metabolizes its sugars into complex flavors.
Enos and Reinhardt’s brewing methods for their barrel-aged beers take hyper-localized brewing to a whole new level. They begin by pressing apples from their orchard and allowing the juice to ferment farmhouse-stye in the open air, culturing the yeast found naturally on the fruit. Then, they inoculate their barrel-aged beers with this active cider, producing truly wild ales with unique, complex, and sometimes wholly unexpected characteristics.
If this sounds like an unusual way to ferment beer, it’s because it is. It can be risky, because it’s difficult to control—a brewer isn’t always sure what kind of yeast will take hold or what kinds of flavors it will produce. “That’s why our motto is, ‘May the Funk be with you,” Enos says, laughing. He is being modest. A veteran brewer of more than two decades, he’s had the opportunity to fine-tune his recipes and has the competitive accolades to prove it. Still, there’s a significant amount of seasonal improvisation inherent to his methods.
“We like to listen to our environment, and incorporate it into our beers as much as possible,” says Enos. “That’s why we have a place name for our brewery,” adds Reinhardt. “We feel there’s amazing nature all around us, and there’s great flavors in nature. We’re using ingredients that are available here, brewing at ambient temperatures and really having some fun. Our beer reflects what we think is the taste and flavor of this area.”
As an example, they point out one barrel smeared with dark purple juice—evidence of the 20-ish pounds of fresh-picked olallieberries they crammed into it the weekend before. When the local prickly pears ripen, the fuschia-colored fruits will be added to an old tequila barrel with their house saison.
Most of these beers won’t be ready for another four to 12 months—so stay tuned. In the meantime, the new brewery is definitely worth a visit. There were five beers on tap last weekend, including the Gooseblind IPA, which is laden with tropical pineapple flavors and aromas. My favorite was the Moro Cojo, a medium-bodied sweet and sour wheat saison that I was amazed to find is brewed with Kolsch yeast. This culture, which usually produces clean, crisp lagers, had been distressed by high Watsonville temperatures, which resulted in some deliciously funky flavors. Says Enos about their unorthodox style, “We like to use brewing knowledge, and the un-knowledge, and then break that knowledge.”
UPDATE 7/28/16 9:31a.m.: Title of the article changed to more accurately reflect the location of the brewery.

Next ArticleReview: Cabrillo Stage’s ‘Fiddler on the Roof’