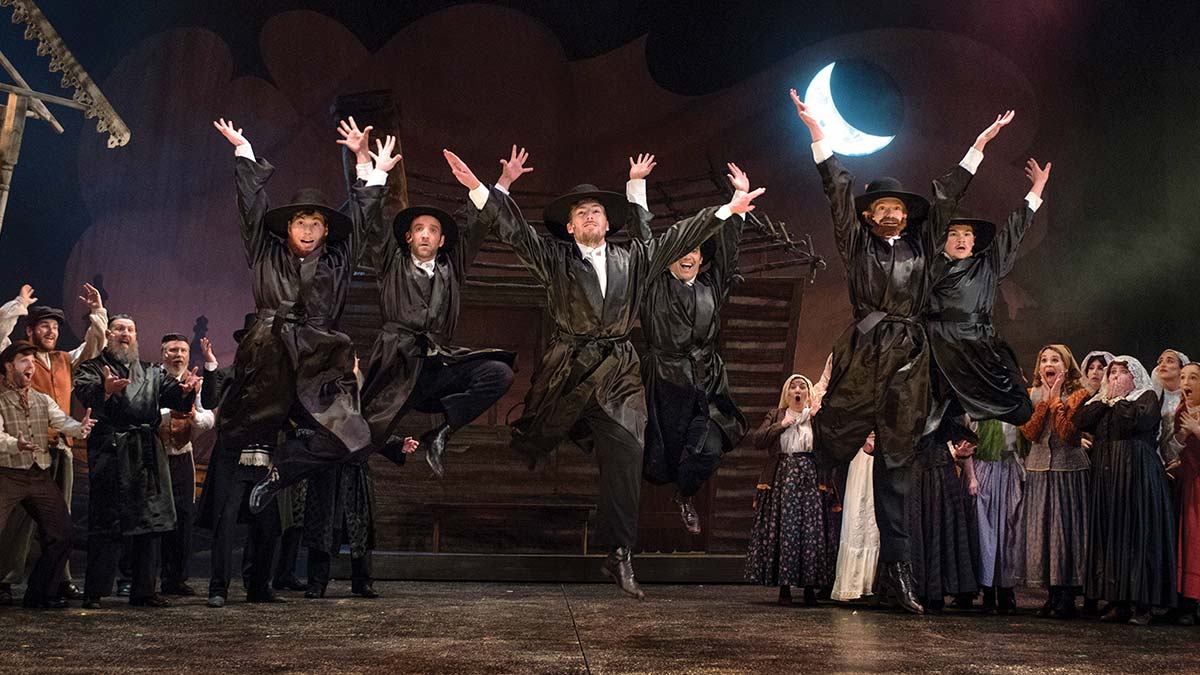 Back in 2012, the Cabrillo Stage summer musical series mounted one of its most successful productions, Anything Goes. It was a frothy 1930s period piece built around vintage Cole Porter songs, and featuring what may be the single most electrifying production number in CS history—a massive syncopated tap extravaganza to the title tune, in which everyone but the orchestra was onstage dancing.
That show was directed and choreographed by Kikau Alvaro, making his CS debut. And now Alvaro is back in the same capacity for the second production of the company’s current season, Fiddler on the Roof. True, there are few opportunities for ensemble tap dancing in this enduring tale about the denizens of a poor Jewish shtetl in a remote area of Russia toward the end of Tsarist rule. But Alvaro still delivers a wonderful production of this classic musical, vividly imagined in the design and dance departments, and blessed by a knockout centerpiece performance by Adam Campbell in the central role of Tevye, the dairyman.
Originally produced on Broadway in 1964, the Joseph Stein-Jerry Bock-Sheldon Harnick musical was based on the stories of Sholem Aleichem. The original production was directed and choreographed by the great dance maestro Jerome Robbins (whose choreography Alvaro reproduces here, according to the credits). And while the dancing is terrific (especially ensemble pieces like Jewish and Russian men dancing in a bar during the song, “L’chaim!,” or the villagers celebrating a wedding), this is not a show that depends on dancing; rather, it’s a moving tale of life, love, family, and, of course, tradition, in an era of changing values.
Tevye is the engine that makes this show go. Campbell’s great singing voice can be big and expressive, or soft and sweet, and his wry demeanor is irresistible, whether conversing with God, or in his robust rendition of Tevye’s signature song, “If I Were a Rich Man.” A poor dairyman whose assets amount to one milk cow and a lame horse, Teyve and his wife Golde (Marianne Thompson, another fine singer) have five daughters to see settled, with the help of village matchmaker Yente (Alice Hughes). A staunch upholder of “Tradition” (as laid out in the rousing opening number), Tevye’s worldview is challenged as, one by one, his three eldest daughters choose their own husbands for love, rather than submitting to arranged matches.
Tzeitel (a spirited Brenna Sammon) begs to be released from a proposed match with elderly butcher, Lazar Wolf (an entertaining Mike Stark), so she can marry the shy young tailor she loves, Motel (engaging Ryan Fish). Hodel (winsome Marina Hallin) strikes up a rapport with penniless scholar and revolutionary Perchik, played with sweet, comic fervor by Jordan Sidfield. Most challenging to her father is young Chava, played with quiet determination by Jenni Chapman, who falls in love with non-Jewish Russian boy Fyedka (Ryland Gordon).
Highlights of this production include the “Dream,” in which Tevye persuades Golde to agree to the wedding of Tzeitel and Motel by claiming her Grandmother Tzeitel (a very funny Anya Ismail), visited him from beyond the grave to endorse it—a scene enacted onstage by the entire company. The candlelit “Sabbath Prayer,” sung onstage and in the aisles, is also lovely. And while most of the showstopper numbers are in the first act, Act 2 includes the moving, heartfelt duet, “Do You Love Me?” by Tevye and Golde.
Scenic Designer Skip Epperson’s sets are as evocative as they are clever, a row of simple house exteriors that move around and revolve to disclose various interiors. (The crossed-log roofline of the central one makes a splendid perch for the eponymous Fiddler, nicely danced by Conrad Useldinger.) Most impressive is the painted backdrop in which the sun sets and the moon rises in a swirly Chagall-like skyscape, while lights twinkle on and off in distant mountain villages. (Lighting design is by the ever-stalwart Kyle Grant.)
Maria Crush’s costumes (vests, tasseled prayer shawls, and bloused Russian outfits for the men; peasant skirts and kerchiefs for the women) beautifully convey a sense of period while giving everyone room to move and dance. In terms of production and performance, this Fiddler is rich indeed.

The Cabrillo Stage production of ‘Fiddler On the Roof’ plays through Aug. 14 at the Crocker Theater, Cabrillo College. For information, call 479-6429, or visit cabrillostage.com.