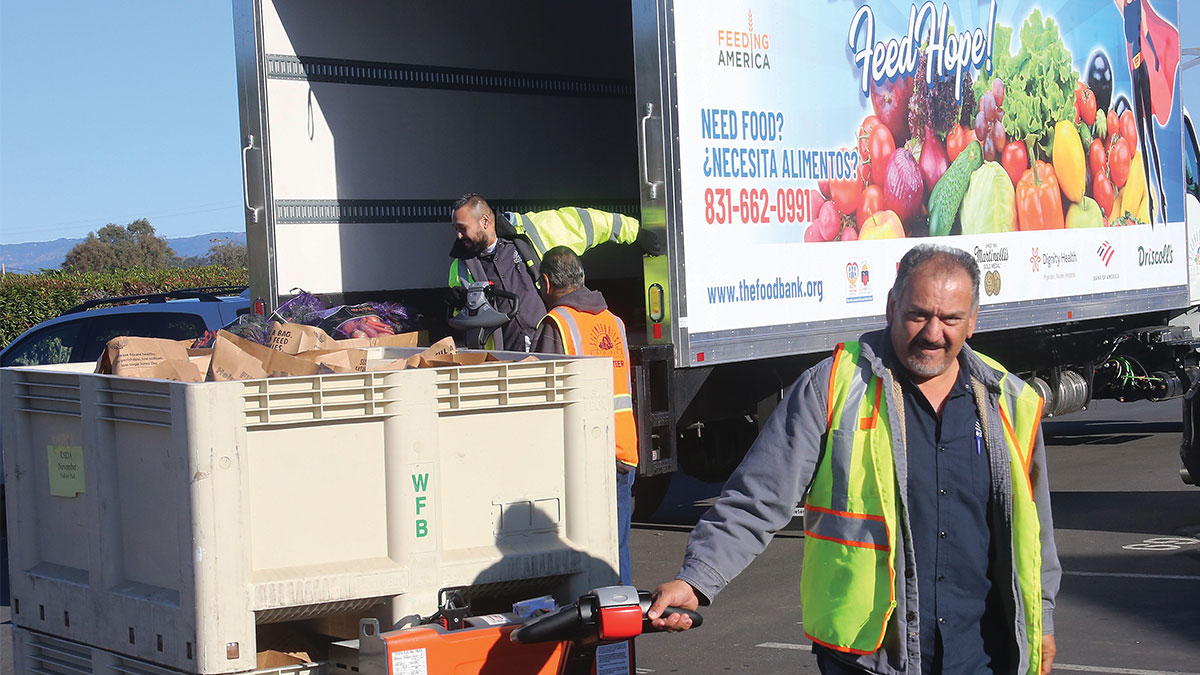 In the flatlands of south Santa Cruz County, winter’s short days and blustery cold have already taken their toll on the area’s famous farmland. Fields that just weeks ago offered a bounty of lettuce, tomatoes and strawberries are picked-over, muddy and mostly dormant.

The lean season has arrived, and this year, it may be felt more acutely inside hundreds of local homes where residents already struggle to find enough to eat.

“We’ve been looking at what’s coming out and the impacts on our community,” says Joel Campos, director of community outreach for Second Harvest Food Bank Santa Cruz. “It’s excluding people.”

The so-called “able-bodied” work rule change, which would require food stamp recipients to be employed at least 20 hours per week year-round, targets adults age 18-49 and is expected to hit seasonal workers in industries like agriculture and construction particularly hard, Campos says.

It’s also just one of several proposed changes to food stamp programs—known in California as CalFresh—that have tested the county’s social safety net in recent months. Nonprofits like the food bank and food justice group Food What?! say that other proposals to increase immigration status checks and alter enrollment rules for those receiving other government benefits are already having a chilling effect.

Nationwide, estimates are that as many as 5 million people could see food stamp benefits reduced or cancelled as a result of changes currently winding through federal bureaucracy. In Santa Cruz County, where the local 27% child poverty rate is already second-highest in California, the effects could be dire for residents scrambling to keep up with rising costs of living and stagnant wages.

“It’s a huge issue, because food stamps in this county are no different,” says Kayla Kumar, development director of Food What?! “It’s the number one way the government kind of addresses poverty.”

Kind of, Kumar says, because nonprofit groups like Food What?!, Mesa Verde Gardens and others already help many residents left behind by government benefit programs grow or buy their own food at reduced rates.

Santa Cruz County residents skipped about 21.5 million meals in 2017, even after local food assistance programs provided about 28.2 million meals, according to a recent joint report by UCSC and Second Harvest Food Bank. Government programs including CalFresh provided 72% of those meals, while Second Harvest and other community groups served the rest.

As it stands, some 645 households in the county could join the ranks of the hungry, since their current monthly CalFresh benefits could be denied or discontinued if the new federal rules are fully implemented, says Leslie Goodfriend, senior health services manager for the county. Those households include 413 children and 263 seniors or disabled adults, she tells GT.

Any decrease in federal dollars to support CalFresh, Goodfriend warns, could also have local economic ripple effects. With more local businesses and farmer’s markets now accepting payment by food stamps with EBT cards, cuts would also be passed onto vendors.

“It does more than just offer food assistance,” Goodfriend says. “When you spend your CalFresh dollars at a grocery store, that directly helps that grocery store. It helps our economy.”

More than 1 in 10 U.S. households ran out of food in 2018, according to federal estimates. While long-term studies have shown that child development, academic performance and adult health can all be negatively impacted by food scarcity, many households who might qualify for government assistance do not apply.

In Santa Cruz County, a single person making $2,024 or less per month may be eligible for food assistance, or up to $4,184 for a family of four. Still, in an example of what researchers call the “SNAP gap,” it’s rare, even in areas of the county where the majority of residents are low-income, for more than 20% of people who are eligible for food benefits to apply for them.

“These rules don’t make any sense on purpose,” Kumar says. “It’s not for lack of education. It’s deliberately confusing.”

One big problem, says Campos of Second Harvest, is that local residents who have family members with legal temporary U.S. residency or mixed immigration statuses have been increasingly wary of seeking food assistance in the current anti-immigrant political climate. Walk-in traffic for residents inquiring about government assistance at the food bank has already plummeted to about half the usual level, he says, thanks to fear and confusion about the future of food stamps.

“It’s dropping off on the CalFresh program, but that means it increases here at the food bank,” Campos says. “We don’t ask them any questions.”

About 20% of the county’s nearly 275,000 residents go to the food bank for help each month. The nonprofit provides tens of thousands of meals and bags packed with groceries for Santa Cruz County residents.

While Second Harvest focuses on immediate hunger, Food What?! employs dozens of local youth each year to grow food on two plots at UCSC and in Watsonville. Participants get to take home a share of produce each week, and the long-term goal is for marginalized communities to build their own sustainable food systems.

One example is the nonprofit’s new “prescriptive produce” program, where doctors at the clinic run by fellow nonprofit Salud Para La Gente (Health for the People) can prescribe vouchers for healthy food to patients struggling with diet-related issues, such as diabetes. Those prescriptions can be redeemed at a Food What?! farm stand outside the clinic. Since it started over the summer, the program has distributed some 3,000 pounds of food, Kumar says.

Other ingrained dynamics may be harder to change. While Santa Cruz County routinely ranks highly on national lists for the most expensive places to live, it’s also a hub for low- and middle-wage jobs in hospitality, agriculture and construction with income swings that can be hard to weather. It’s these seasonal workers that stand to be hit especially hard by changes to food stamps, Campos says.

“Once they stop working, they will start asking them to continue finding work,” he says. “Especially farmworkers; they might be off work five months.”

The irony of locals growing the nation’s food only to be left hungry themselves isn’t lost on Kumar.

Second Harvest Food Bank, Food What?! and Mesa Verde Gardens are among the 37 local nonprofits participating in this year’s Santa Cruz Gives holiday fundraising drive. Donate through Dec. 31 at santacruzgives.org.

Next ArticleThe Year in Review: 2019