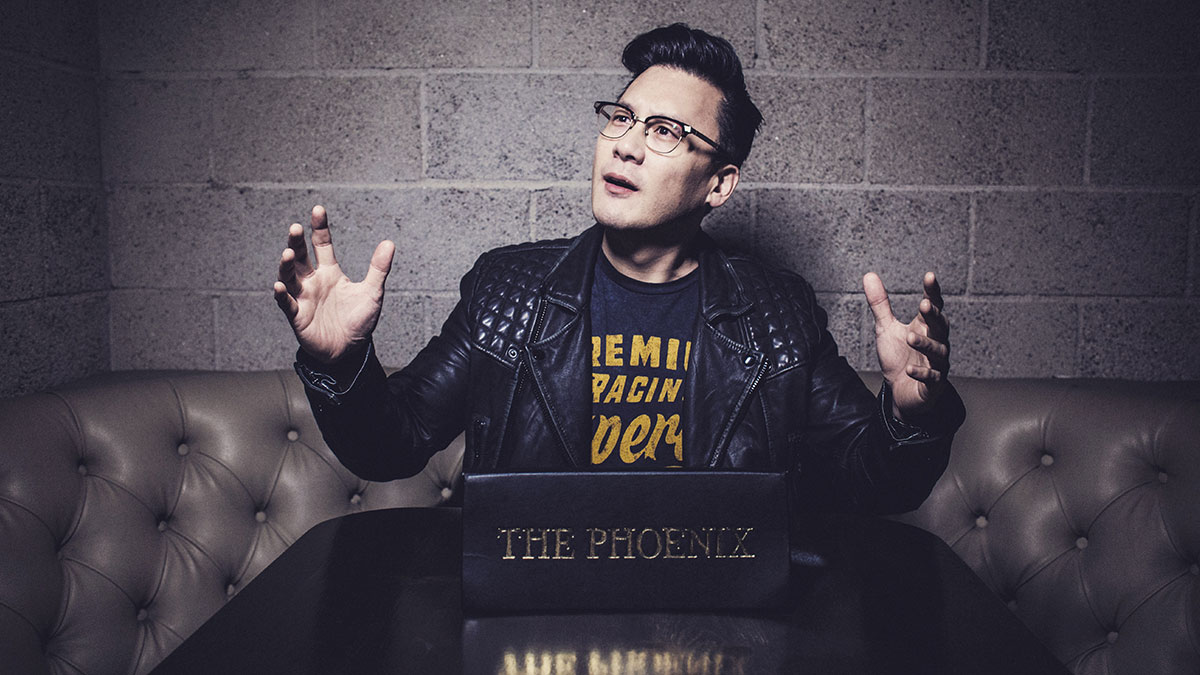 Music is therapeutic. That’s why in 1985, Sean Seman founded Young At Heart, a local organization that brings live music to senior citizens. Many of them have memory disorders and experience cognitive stimulation by enjoying music from their youth. You can help keep this project funded by going to this all-star local Christmas jam that features Carolyn Sills, Tammi Brown, Tom Fedele, Sean Seman, and others. All proceeds benefit Young At Heart and the good work they do for the seniors in our community. AC

Eliot Chang has a lot he wants to tell you—and it’s not all funny. Technically, he’s a stand-up comedian, but he’s also a really opinionated YouTuber that just likes to flip on his video camera and teach guys how to “not be nervous around pretty women,” or how to “overcome shyness.” He thinks about everything, and he believes in his heart that there’s a solution to every problem. His comedy has the same optimistic spirit, and he’s treated his career with the same ambitious drive. He’s appeared on HBO, Showtime, “Chelsea Lately,” and Comedy Central. AC

Repatriated expat Lauren Napier takes inspiration from everywhere. A writer and world-traveler, Napier has written for NPR Berlin and been covered by Afropunk. She’s performed punk rock on acoustic, and folk songs with punk ferocity. On her Void of Course EP, the singer-songwriter mixed mysticism and wolf howls with folk and soul, creating a set of spare, vulnerable and vaguely pagan bedroom-pop songs. Appropriate, then, that her follow up was Bedroom Recordings, a haunting 25-track album combining all her varied interests, from nature and medieval literature to cigarettes and the city. MIKE HUGUENOR

It’s easy to imagine SaQi’s trance-y beats pulsating over a Burning Man documentary. The classically trained musician’s perfect blend of organic and synthetic sounds conjures vivid emotional landscapes, like dust storms and lightning-filled skies. In the belly of the beast of generational angst and everyday mysticism, there’s a fulcrum of potential dripping with effortless sexuality. SaQi’s music is the ideal backdrop for finishing a creative endeavor or nodding rhythmically on the dance floor, lost in thought and time, looping back to your own opening credits. AMY BEE

Everyone has their own holiday traditions. For some, it’s carolling. For others, it’s that first sip of a peppermint mocha latte. In Santa Cruz, it never feels like the holidays until Bone Thugs-N-Harmony rolls through the Catalyst on a wave of the sticky-ickiest of clouds. This year, the group will play on the (20) first of the month, getting you higher, higher baby with an array of hip-hop and smooth R&B jams. MAT WEIR

You think you know your reggae? Groundation knows reggae. Playing passionate roots music with elements of dub and jazz, the group takes its name from the Rastafarian high holy day of Grounation (the day Haile Selassi visited Jamaica). The band’s singer taught Sonoma State’s first-ever course on reggae music history, and its harmony vocalist sang onstage with the Original Wailers and Toots and the Maytals. The bass player has worked with Sean Paul and Queen Ifrica. Shall I go on? OK, one more. Groundation also features jazz-organ heavyweight Wil Blades, a Down Beat “Rising Star” for 15 years and counting. MH

CHRISTMAS WITH THE MISFITS

Now in its seventh year of going where eagles dare, “Christmas With the Misfits” gathers local bands, and a few from throughout the state, to cover their favorite Misfits songs. All proceeds go to the Santa Cruz Animal Shelter and the children’s wards of a local hospital. Prizes like merchandise, skate decks and gift certificates for local businesses will be auctioned off throughout the night, and patrons can either purchase raffle tickets or bring a sealed, unwrapped toy for five free tickets. Grab your favorite hellhounds and make a night of the loving dead. MW

Did you know L.A. Latin-fusion all-stars Ozomatli made a kids album? Ozomatli Presents Ozokidz is cute and educational, with a They Might Be Giants quirkiness. Like the rest of the band’s catalog, it’s full of infectious dance beats ala cumbia, reggae and hip-hop, all in Spanglish. It’s an album parents won’t mind having to listen to in the car 1,000 times. In fact, they’ll be singing “There’s a moose on the loose!” right along with their cherubic little angels. Not sure whether the award-winning multicultural genre-bending band will play these songs live, but you in the audience should try and request a few! Just yell, “Exercise! Hey! Hey! Hey!” and see what happens. AB