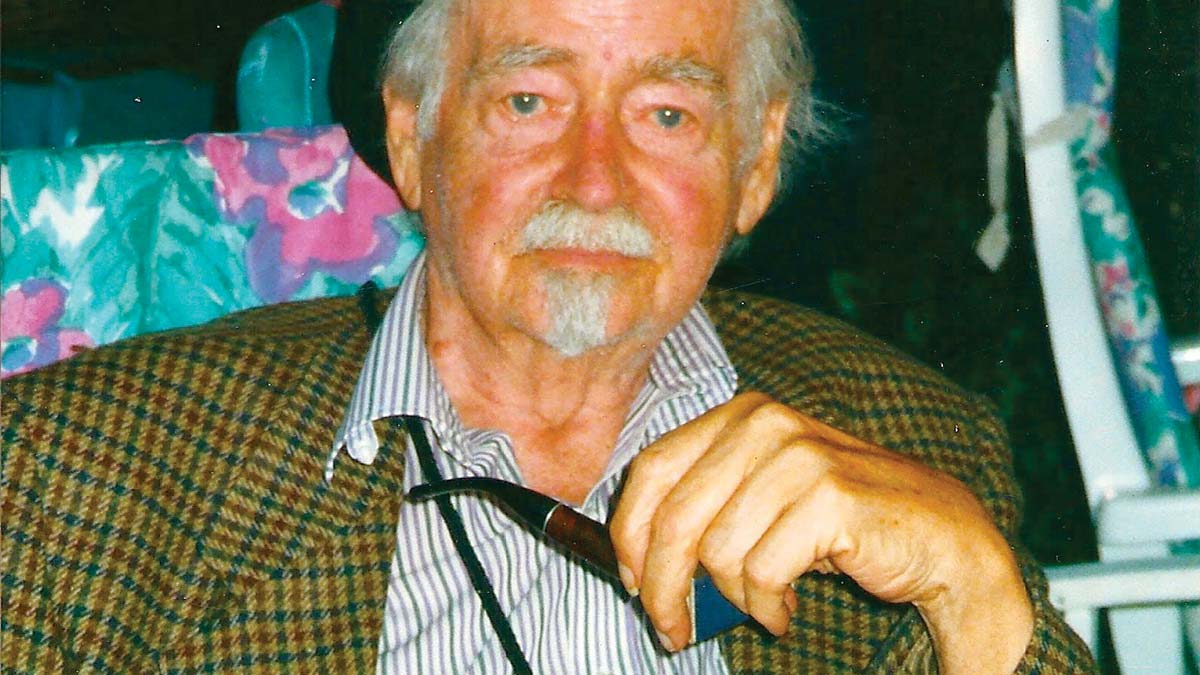 The rumpled tweeds, the perennial beret, the bohemian confidence—this was the George Hitchcock we were lucky to know during his years in Santa Cruz. A literary switch hitter, Hitchcock moved as easily through drama as he did through the jazzy rhythms of modernist poetry. A tireless, if finicky, printer of other poet’s words, Hitchcock came to UCSC to teach theater and ended up bringing his iconic magazine kayak for the benefit of wordsmiths and readers everywhere. Brimming with Hitchcock’s micro-managed personal style, kayak’s pages showcased the master’s hand-printed selections from such writers as Robert Bly, W.S. Merwin, Robert Hughes, Kenneth Rexroth, and Anne Sexton.
Big and handsome, Hitchcock was a man of many pursuits, from politics to gardening. That he also became an accomplished painter should then come as no surprise. Yet this visually exuberant side of the writer is sure to surprise, and as two upcoming shows will reveal, to disarm, as well.
Into folkloric settings and wry vernaculars, Hitchcock placed his subjects at the intersection of surrealism and magic realism. Fantasy and dream permeate most of the pieces that will be shown at Felix Kulpa, starting Friday, Sept. 2. Hitchcock himself admitted that he approached painting—as he did poetry—as a discovery, a voyage to be enjoyed. Impervious to his self-taught status, Hitchcock created a steady stream of sophisticated, deceptively playful paintings in both his Eugene, Oregon home as well as his Baja residence over the last 20 years of his life. The paintings have an appealing primitivity. Odalisques, jugglers, and street vendors share the picture plane with roosters, soldiers, and Aztec handball players à la Picasso. His sense of composition is alarmingly astute.
In one bold piece, Hitchcock has balanced an enormous profile of a woman holding a hand mirror—her face the color of sunburned bronze—against a rough-hewn yellow chair and an olive-green window. The artist’s sense of where his figures are in relation to each other is dynamic yet elegantly equipoised. You can feel his enjoyment in each mark outlining the shapes.
The painter’s color choices are as tasty as they are unexpected: The boy riding with great panache on a skateboard, moves across a field of butter yellow. Along with blue shorts and a blue baseball cap, he wears a rich crimson sweatshirt emblazoned with the word “ZEUS” and two jagged lightning bolts. Whimsical, yes. But also a solid construction of colors, shapes and youthful hormones.
Those familiar with the spare, feral modernism of Hitchcock’s plays and poetry will be intrigued by the paintings. They display a strong, clear flourish of surreal juxtapositions. But of course they should, coming from the man who wrote: “I am in a forest looking for fragments of speech … ” (Directions, 1978).
The artwork happily proclaims the man and his self-made life, one in which he essentially did it his way. Those who knew him for the years he lived in Santa Cruz —before the earthquake invited him to relocate to his native Oregon—will find both the man they knew and another persona he performed during the last two decades of his life. At his death at the age of 96 in 2010, he’d left the world hundreds of paintings, scores of exhibitions, and many admiring collectors of his imaginative pieces. The exhibitions at Felix Kulpa will undoubtedly add more admirers, and collectors, of the surprising artwork by a literary legend.

Previous ArticleFilm Review: ‘Southside With You’