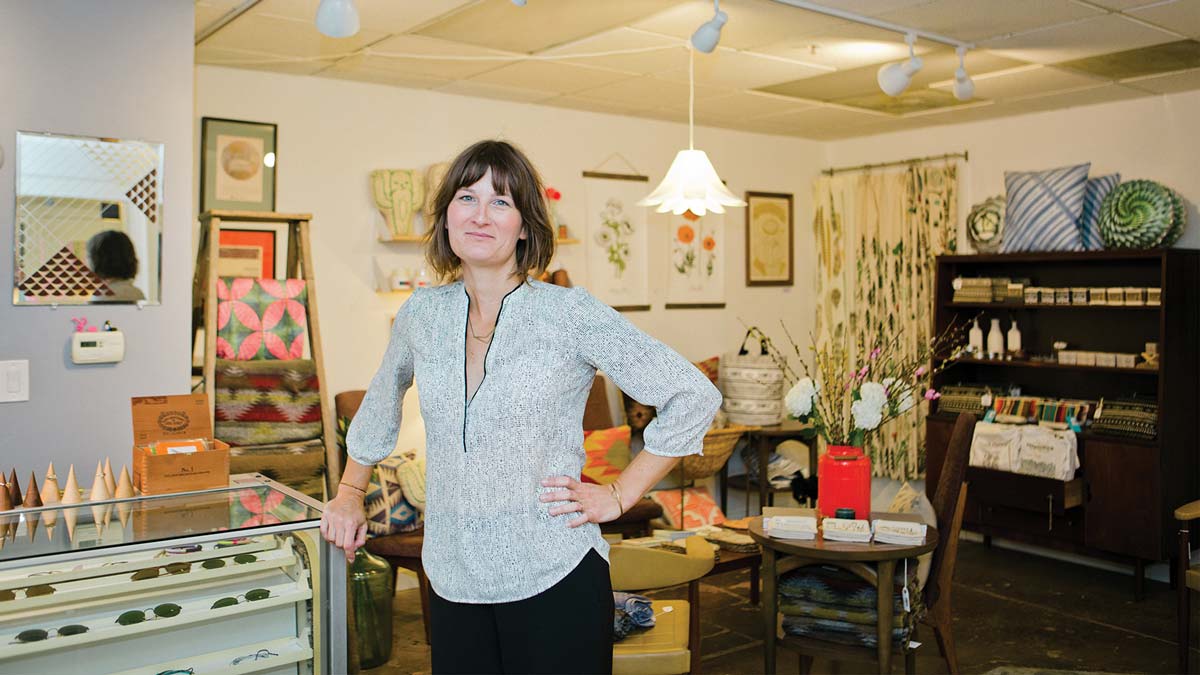 Two years ago, when her son was about to start preschool, former journalist Sonia McMoran readied to re-enter the workforce.
“My issue was that every time that I sent my resume, I was already dreading it. I was dreading the possibility of getting that job and working a 9-to-5 where somebody else was dictating my creative levels,” said McMoran.
At her husband’s urging, McMoran decided to pursue her dream of opening a home decor store—a perfect fit given her background in writing on interior design. She took a small-business night class at Santa Cruz County SCORE, a Capitola-based business resource center. She got paired with a mentor and received help with her business plan.
McMoran opened Home/Work on Cedar Street in Santa Cruz last year, and is already planning to expand.

Twice in the past year, Santa Cruz has been named one of the top 20 cities in the nation for women entrepreneurs.

She will be one of eight business owners at an Event Santa Cruz discussion titled “The Santa Cruz View” at 6 p.m. on Thursday, March 24. Styled after the popular daytime television show “The View,” the talk features an all-woman panel which will discuss the pros and cons of local entrepreneurial life.
McMoran says for business women with children, it’s crucial to share the parenting with their partners.
“Try and shed the guilt, because I can guarantee your partner and husband does not feel as much guilt as you for going to work,” she says. “It is very easy for mothers to feel like—and I feel like it’s very self-imposed—they don’t deserve to be an equal partner in a family. They feel this guilt of wearing all these different hats and multitasking to the point where they’re losing their minds.”
Twice in the past year, Santa Cruz has been named one of the top 20 cities in the nation for women entrepreneurs. The two sites, NerdWallet and GoodCall, based their  rankings on factors like financing opportunities, local economic health, business climate and educational values.
The NerdWallet report ranks the Santa Cruz area as fourth-best in the U.S. overall for women entrepreneurs, and third for women-owned businesses per 100 residents.
According to the GoodCall list, women own 34 percent of businesses in Santa Cruz, which ranks the city No. 17 in the nation for women entrepreneurs.
Nationally, the glass ceiling has yet to fully shatter, especially at the biggest companies. A report last year found that there were more S&P 1500 companies with a CEO named John than ones that had a woman CEO.

In addition to SCORE, the county has several resources for budding business owners, such as the Santa Cruz Small Business Development Center at Cabrillo College. Some resources are specifically for women, such as a monthly women’s business meetup group at Santa Cruz’s Pacific Cultural Center and a quarterly luncheon and annual conference “Santa Cruz Women in Business,” hosted by the Santa Cruz Chamber of Commerce.
Hair stylist Noelle Weatherwax is the 30-year-old owner of Santa Cruz’s Concrete Rose Salon, who will also speak at the March 24 event. Before she launched the salon two years ago, she not only took small-business classes, but also attended free brown-bag lunch talks at the downtown Santa Cruz Public Library for business owners. To raise capital before opening her salon, she sold her car and clothes and launched a successful $6,000 Indiegogo crowdfunding campaign.
Weatherwax says one thing Santa Cruz offers is a small-town feel. For her ribbon-cutting ceremony in 2014, she dialed then-mayor Lynn Robinson on a whim, and to her surprise, the mayor not only picked up the phone but also said she would come, suggesting Weatherwax call the chamber of commerce as well.
The salon is busy—stylists are booked up to eight weeks in advance—and is known for its community service. In exchange for a salon discount, for example, customers can donate beauty items, or, as Weatherwax calls it, “product graveyard, where your bathroom is full of stuff that you don’t use and don’t like.” The salon, she says, gives the items to the homeless shelter.

Ashley Cramer, who owns The Barre Studio in Capitola where the March 24 event will be held, was in pharmaceutical sales before deciding she wanted to open a ballet-inspired fitness studio.
At first, she pursued opening a barre workout franchise. She secured a bank loan and a location, before realizing she wanted her own business and started over.
“I just had this gut feeling that [the franchise model] wasn’t the right thing for me,” says Cramer, who will also be speaking at the event. “It could have cost me my funding or the space that I found … I trusted my gut knowing that it was risky, and it was one of the best decisions that I had.”
To raise capital, Cramer kept her full-time job in sales during the year she was planning for the studio and the first nine months after it opened.
Managing her time was difficult, and she didn’t think she was going to make it, she says.
“It’s kind of like waiting for a ship to get close to dock. You’re just waiting and waiting for the ship to get closer, and then finally there’s a point where you can jump,” Cramer says.
That extra capital from working two jobs proved crucial, because when construction costs exceeded expectations, it left her with enough to pay rent and staff. That sort of thing, Cramer has learned, is what business owners should be prepared for.
“Plan on a few costly mistakes in your first year,” she says.

Event Santa Cruz will host a talk-show format event at 6 p.m. Thursday, March 24, at the Barre Studio, 2001 40th Ave., Suite C, Capitola. There will be snacks and live performances.