.Jewel Theatre Leads Off Holiday Season With ‘Me And My Girl’ 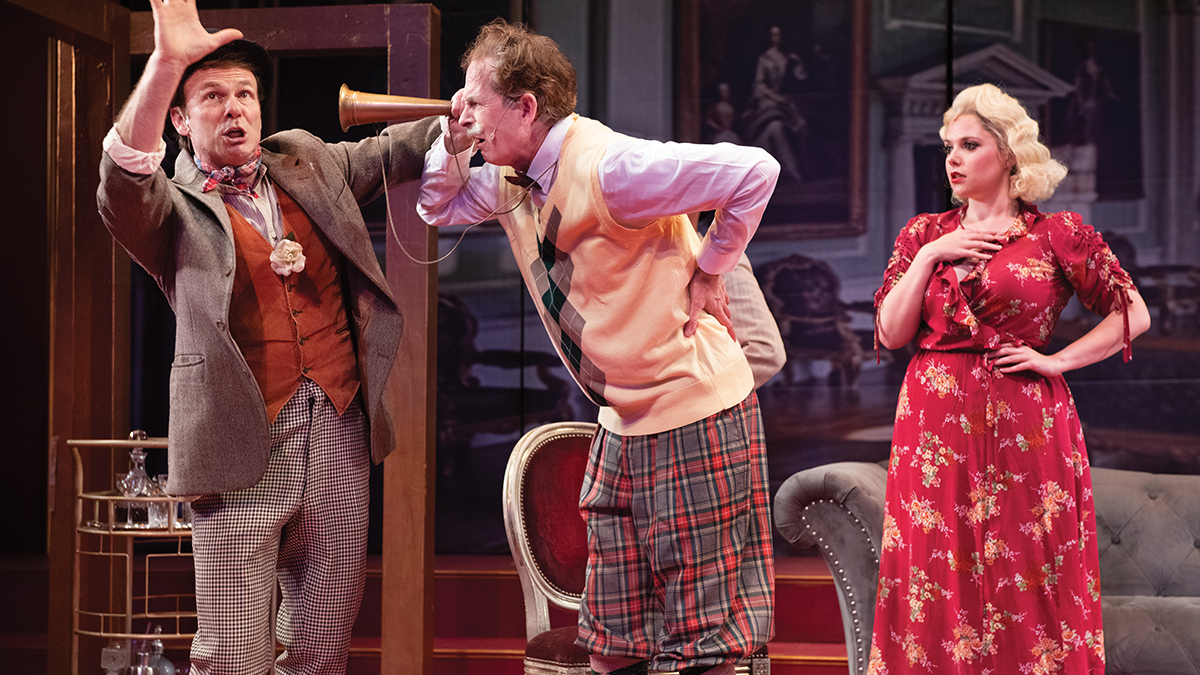 You could call it My Fair Laddie, or maybe The Prince Diaries: an ordinary person is plucked out of obscurity and thrust into high society to learn the manners of an aristocrat. The premise may be as old as the jokes, but it’s all given a buoyant spin and terrific-looking production in Jewel Theatre Company’s staging of the hit musical Me And My Girl.

Originally produced in 1937, the show features broad, music hall-style comedy in the book and lyrics by Arthur L. Rose and Douglas Furber, plus toe-tapping tunes by Noel Gay. A revival in 1984, with a revised script by Stephen Fry, was a smash in the West End, and later on Broadway. Now it enters the JTC tradition of presenting a musical in November to launch the start of our local theatre holiday season.

The show is set in the 1930s, where the nobles are all in a tizzy; the old Earl of Hereford has died, and his only living relation is Bill Snibson (Shaun Carroll), a brash, working-class Cockney from Lambeth, in London, who sells produce in the streets. He’s understandably gobsmacked to learn he’s the nominal heir to a lavish country estate, noble titles and a fleet of servants. Complicating matters is Bill’s attachment to his Cockney sweetheart Sally Smith (Julie James), whom he has no intention of leaving behind.

But according to the late earl’s will, Bill must first be deemed “fit and proper” by its executors, or the deal is off. Popular JTC regulars Diana Torres Koss and Christopher Reber are both excellent as the executors—Maria, the formidable duchess who is Bill’s newfound aunt, and Sir John, an upright but amiable family friend. Sir John thinks they can groom Bill into his new role, but Maria declares that first, Sally must go.

Also involved is voluptuous Lady Jacqueline (a frisky Shelby Stewart), who outlines her self-interest in the song “Thinking Of No One But Me,” and plots to seduce Bill into marriage. This is tough on the lovelorn fiancé she deserts, Gerald, played by Nicholas Yenson as an uptight fussbudget. Not only is Yenson extremely funny, he sings and tap-dances up a storm, leading the ensemble in the rousing “The Sun Has Got His Hat On” that opens the second act.

Another standout is Martin Rojas Dietrich as the family solicitor Parchester, who scuttles across the stage with oozy comic brio. Director and choreographer Lee Ann Payne gets the corps up and moving in fine style in the big production numbers, especially “The Lambeth Walk,” which closes the first act, where the Cockney “Pearly” culture and the snooty nobs first collide, then join forces.

(Payne also turns up in the singing-dancing ensemble, and plays Sally’s grumpy landlady in a very funny exchange with Reber’s Sir John.)

As Bill, Carroll’s singing is a bit tentative at times, but he’s so gifted at physical business, such a deft and tireless comic acrobat, that it doesn’t really matter. There are some moments, however, like his romantic duets with James’ Sally, that the music (canned, not performed live) threatens to overwhelm the voices.

Kent Dorsey’s clever scenic design consists of large, movable rectangles that become doorways or picture frames, while images projected upstage define the space as a grand country house interior, a Lambeth street corner, or a garden. B. Modern’s costumes are a delight, from vintage streetwear to the exuberant Pearly outfits to the ladies’ gowns in majestic shades of wine-red for the finale.

Since this isn’t a show by the Gershwins, say, or Cole Porter, most of the music is unfamiliar to modern audiences. One exception is a song written by Gay for another show of that era, and slipped into this one for the 1984 revival; if “Leaning On A Lamp-post” rings a bell, it’s because it became a popular novelty record by Herman’s Hermits in the 1960s. It’s right in keeping with the goofy charm of this production.

The Jewel Theatre Company production of ‘Me And My Girl’ plays through Dec. 8 at the Colligan Theater in The Tannery. 425-7506, jeweltheatre.net.

Next ArticleNuz: The Only Logical Conclusion About Santa Cruz’s Recall