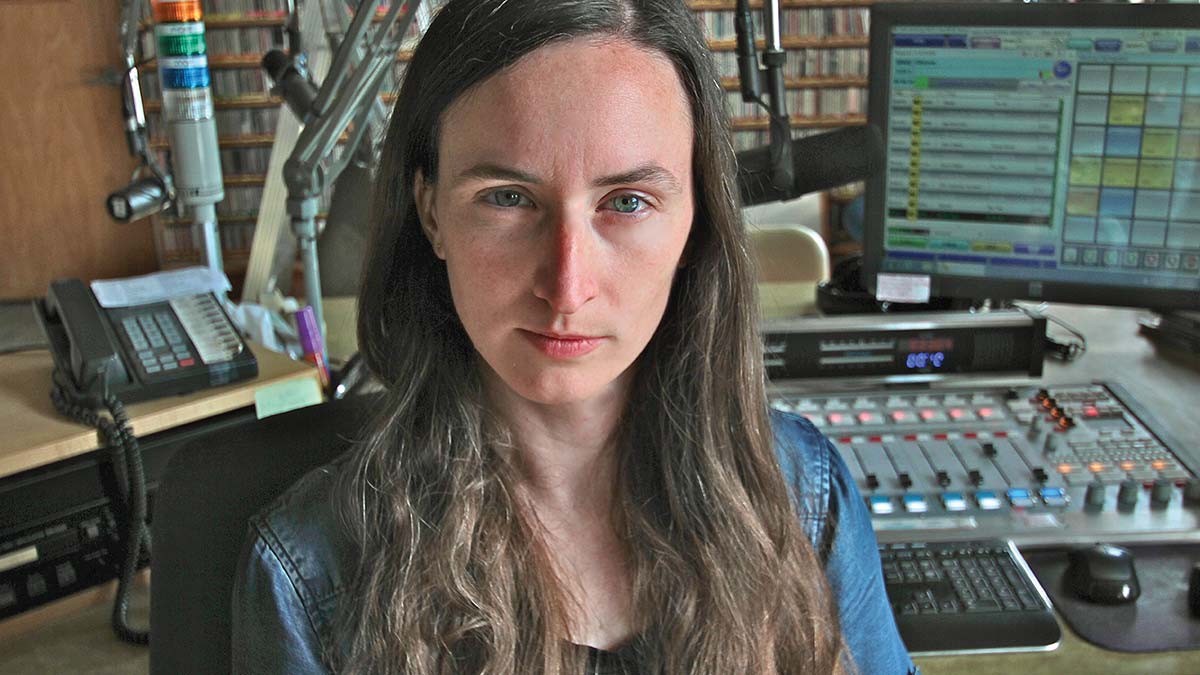 After enduring a tumultuous several months, KUSP is still on the air through at least the end of June, despite an albatross of debt and massive staff cuts to the community public radio station.
“We are indeed still here and still broadcasting,” General Manager Alex Burke says with a confident smile. Unfortunately, she’s currently the only employee left on KUSP’s payroll.
“We felt it was important to keep trying,” she says. “We heard from over 1,000 people during our last [fundraising] drive. Since the start of our new format we’ve heard from over 700 new members, which is pretty exceptional.”
Burke—who previously served as the station’s operations director and has been with the station since 2008—appointed GM on May 6, as the station prepared its final live broadcast that same day.
The station, 88.9 FM on the dial, had been spinning positivity just two and a half months ago when it hired interim GM Bonnie Jean Primbsch, who has since been laid off along with five others. In the weeks leading up to those layoffs, KUSP wrapped up its Mayday Campaign, which launched April 1, aiming to raise a minimum of $300,000 but securing only $114,000.
“In public radio, people, listeners always hear, ‘We’re going to go off the air if you don’t donate,’” Burke says. “But we really mean it. When we get to zero cash, we’re done.”
With the grim June deadline quickly approaching, KUSP is taking drastic measures to keep the lights on and the music flowing. In essence, KUSP is trying to revive itself and painlessly put itself to sleep at the same time.
“What we’re doing now is a two-track approach, which may seem contradictory to some people, but it’s what we have to do,” says board member Stephen Slade. Elected in January, Slade served as the station’s news director in the 1980s and as its development director a decade later. “One is to see if we survive, the other is to sell the station.”
While volunteers and board members have been searching for the miracle donor, the Pataphysical Broadcasting Foundation granted the Board of Directors the authority to sell the station’s license if necessary. So far, no concrete offers have been made. Rumors swirled that KSCO owner Michael Zwerling was interested in purchasing the license, but he denies it.
“I would prefer to help KUSP by underwriting local programs like it used to broadcast,” Zwerling wrote GT in an email.
The last few years saw several managerial shake-ups and a growing debt resulting primarily from programming fees to play NPR programs. KUSP is $780,000 in the red, with $450,000—roughly 58 percent—of that owed to NPR, American Public Media and Pacifica, a radio group based in Berkeley. “The handwriting has been on the wall for a while,” Slade says.
Last September, the nonprofit completely revamped their programming with a focus on music discovery. This meant cutting all NPR programming and choosing to air a mix of emerging musical artists with classic staples in each genre.
During the early stages of the change, they gained more than 700 new contributing members. However, it wasn’t enough. Since the Mayday Campaign ended, the station has raised an additional $10,000.
“We want to be able to say, ‘We tried to be stewards of the money we raised,’” says Burke.
Volunteers and former staff members have continued coming in to the station to help keep the airwaves alive. Burke may set the playlist for the day’s program, but several ex-programmers join her once a week to discuss their current favorite music and help choose which bands or songs to showcase.
“A lot of it isn’t Billboard hits, either,” she explains. “A lot of it really is emerging artists. We’ll pull stuff from bandcamp.com and play things we just discovered and love.”
“People are very passionate about it,” Slade says. “I’m pretty impressed how hard everyone is working and how stressed they feel about the situation we’re in.”
All of this begs the question: What can be done to save KUSP? Monetary donations, of course, are the first answer. However, the problem runs much deeper than that. The worlds of radio and music have changed immensely over the past decade, with more and more young listeners using online sites or apps like Spotify to find their music.
“I think [we] have to make it easy for a certain group of people,” agrees Burke. “You have to show them on their phone where they can get the app.”
Another part of the problem is how noncommercial stations operate in the increasingly cutthroat world of sponsored airwaves. Even now that the station is operating on a much smaller budget, the industry model of short-term emergency fundraising is not sustainable.
“I think it will be necessary for noncommercial, public stations to change their funding policy,” Zwerling says. “So that [underwriting] will become much less necessary to provide operating capital.”
Burke suggests KUSP could figure out alternative ways to raise money, such as regular fundraisers in the community or letting people donate at local stores.
“The organization needs to adapt to the current climate,” she says.
If KUSP, operating at $26,000 a month, makes it past the June deadline and continues to gain memberships, they will look into bringing back live voices from the community, in the hopes of rebuilding the programming they’ve been known for for the past 45 years.
“There’s a real potential to build a community of people who are excited about music and share it,” Burke says. “That’s why we do this.”

Next ArticleTake Back Gets Flak