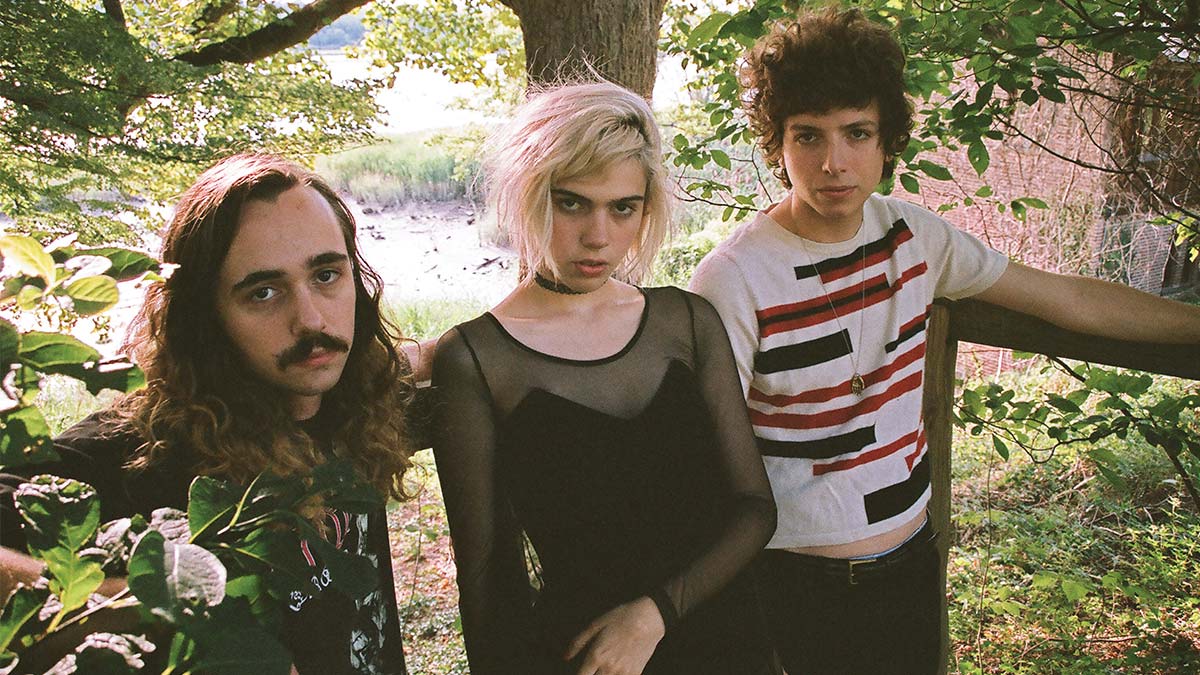 All barely 20 years old now, the members of Brooklyn trio Sunflower Bean discovered rock ’n’ roll in high school in the 21st century, when all of their peers were listening to anything but. For them, as kids, rock was the most underground music you could listen to.
On their debut record, Human Ceremony, released in February, it’s clear that their rock of choice was all over the board, and they’ve tried to smash everything they heard into one album. It’s certainly enthusiastic, and sounds less like a band trying to regurgitate a retro sound than a young band discovering the music for the first time, and wanting desperately to share it with the world.
The influences include early Pink Floyd, Black Sabbath, the Cure, Velvet Underground, Lush, and Tame Impala. And their wild variance can be not just heard in their music, but seen in their look, too. Guitarist/vocalist Nick Kivlen looks strikingly like late-’60s Bob Dylan. Bassist/vocalist Julia Cummings would have looked at home in Siouxsie and the Banshees, while drummer Jacob Faber looks like an indie-folk hipster. This is precisely the jumbled approach they take in their music. It makes perfect sense in the Sunflower Bean universe when they blast those Sabbath power chords in the middle of “Creation Myth” after a couple solid minutes of ’90s jangle-pop.
The album’s single “Wall Watcher” is one of the heavier tunes, influenced by heavy alt, with eerie vocals from Cummings. But it’s not the strongest song, nor is it the best pick for a single. That would be “I Want You To Give Me All Your Time,” the song that follows it immediately on the record. Cummings and Kivlen’s harmonies are somewhere between gorgeous and spooky, and the electric finger-picking guitar work and hook-laden chorus could have easily shot this song up on the alternative rock charts in the ’90s—or maybe the college rock charts in the ’80s.

It makes perfect sense in the Sunflower Bean universe when they blast those Sabbath power chords in the middle of “Creation Myth” after a couple solid minutes of ’90s jangle-pop.

In an interview the band did with NME, they discussed their approach to music as a reaction to the deadly seriousness of the post-rock shoegaze scene. They’re not so much lighthearted—their music is serious and mysterious—but they do have a playful, curious approach to their music that is reminiscent of a brand-new band still figuring out its sound, or at least a band unconcerned with etching out a cohesive marketable image. They’re dabblers, and the jury is out on whether they are aware of when they accidentally dip their feet into uncool territory.
This curiosity is certainly their most enduring trait, but it also gets them in trouble. They are strongest when they see an idea for a song through, rather than pasting different sections together, like the previously mentioned jangle-meets-doom-metal juxtaposition of “Creation Myth.” It’s a fascinating concept, but makes for less repeat listens than other tunes.
“Single Wall Watcher” is strong because it’s short and sweet, and the fact that it doesn’t sound like any other song on the record is a bonus. Other tunes that hit their mark include psych-popper “Human Ceremony,” and the ominous, washed-out shoegaze tune “2013.”
In general, Cummings takes the lead more often than Kivlen. Her voice is an unsettling kind of angelic, while Kivlen tends to wallow in his dark, post-punk melodies. And Cummings is the stronger singer in the group. Her voice is the most suited to the genre hopping. But there’s a certain charm to the songs like “Human Ceremony” where Kivlen pops in with the occasional vocal lines, and their harmonies almost always work splendidly.
Sunflower Bean is only a few years in, and seem like they have stumbled into a solid debut record by covering as many of their bases as possible. If they can refine their sound while keeping their curiosity intact, they’ll go on to great things.

Next ArticleComplete this sentence: “If I didn’t drink alcohol …”