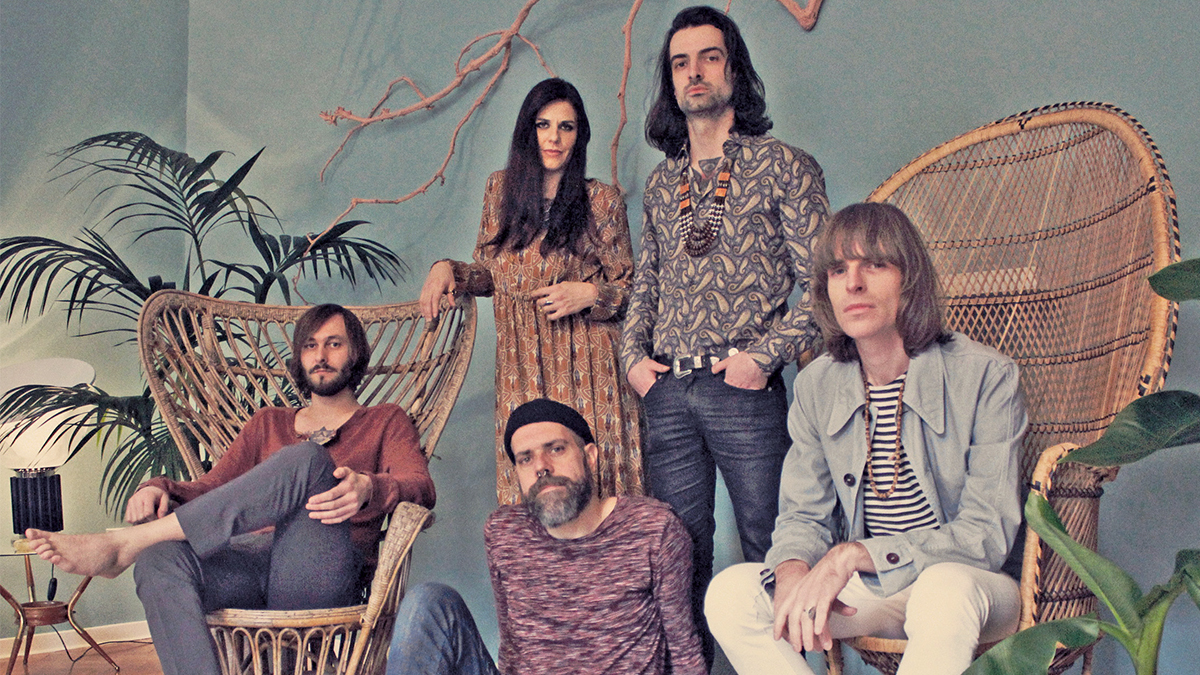 There are psychedelic bands, and then there are psychedelic bands. Mother Island’s claim to the name goes much deeper than the Italian band’s sound—swirling rock ’n’ roll peppered with weird atmospherics and moody counter-melodies. The whole philosophy driving the group’s creative process will have your head spinning if you dig in just a little bit.

“Music must have the ability to possess, there is nothing more beautiful,” says guitarist Nicolò De Franceschi. “It’s not only music that inspires us; we take cues from many different dimensions connected with each other. Every suggestion, every emotion evoked is converted into sound. It’s very important for us.”

The group describes itself not so much as a band, but as “Magic Theatre, for madmen only,” a reference to Herman Hesse’s Steppenwolf, which gives you a sense of the mystical place they go inside of themselves to create music.

“We decided to pay homage to this work because the Magic Theatre represents the last stage of a dreamlike path full of passions, instincts, but also of introspection,” Franceschi explains. “It’s a path that allows the protagonist of the novel to accept the contradictions of existence itself. It seemed to us that it could describe very well the characteristics of the creative process.”

“They are figures we owe a lot to. Their works reflect certain canons that we’ve made in some way our own, which now belong to our imagination from which we draw to write our music,” Franceschi says. “We strongly believe that cinematography, literature, painting and art in general cannot be excluded from any discourse on the creative process.”

The group started back in 2013, and even in describing the group’s origins, Franceschi can’t help but give the backstory a bit of a mystical flair.

“We didn’t really meet and say ‘hey, why don’t we start a band together?’ It’s more like we got in the same train at different stations. Each one of us came across Mother Island on his own, for disparate reasons,” Franceschi says. “We’ve been spending lots of time doing what we love the most: exploring the forms our creativity may acquire.”

In that time, the group has released two records: 2015’s Cosmic Pyre and 2016’s Wet Moon. The debut is a little bit more out there musically, and overall has a harder edge—it’s almost punk rock at times—whereas Wet Moon flirts more openly with pop music.

“Wet Moon is much more direct and cohesive than the previous one. We aimed to write something with simpler structures. We were interested in building atmospheres and transferring the listener to what each song may suggest,” Franceschi says. “What came out is an album with a strong connection to that unconscious world.”

There are moments on Wet Moon where the band drops the pop pretense and explores the very structure of music in the same vein that they are exploring their subconsciousness. “La Danse Macabre,” an homage to the work of Charles Baudelaire, is a prime example.

“‘La Danse Macabre’ was one of the most entertaining pieces to get recorded in the studio,” Franceschi says. “We let ourselves go and followed what the flow suggested. Writing and recording an album requires considerable concentration and attention, which can often lead to a lot of tension. The ‘Danse Macabre’ exorcises all this.”

This will be the group’s first trip to the U.S., which they are very excited about. They’ve played considerable shows already in Europe, and in that time, they’ve perfected their live show, which is the place they feel like all of their philosophies, creativities, brainy theories and psychedelic instincts flourish, and give it something living and breathing, beyond just thoughts about the unconscious.

“Live concerts are where we tend to deeply lose ourselves,” Franceschi says. “It’s a dimension that belongs to us.”

Next ArticleWenger Designs: The Story Behind Their Iconic Chairs