.Wenger Designs: The Story Behind Their Iconic Chairs 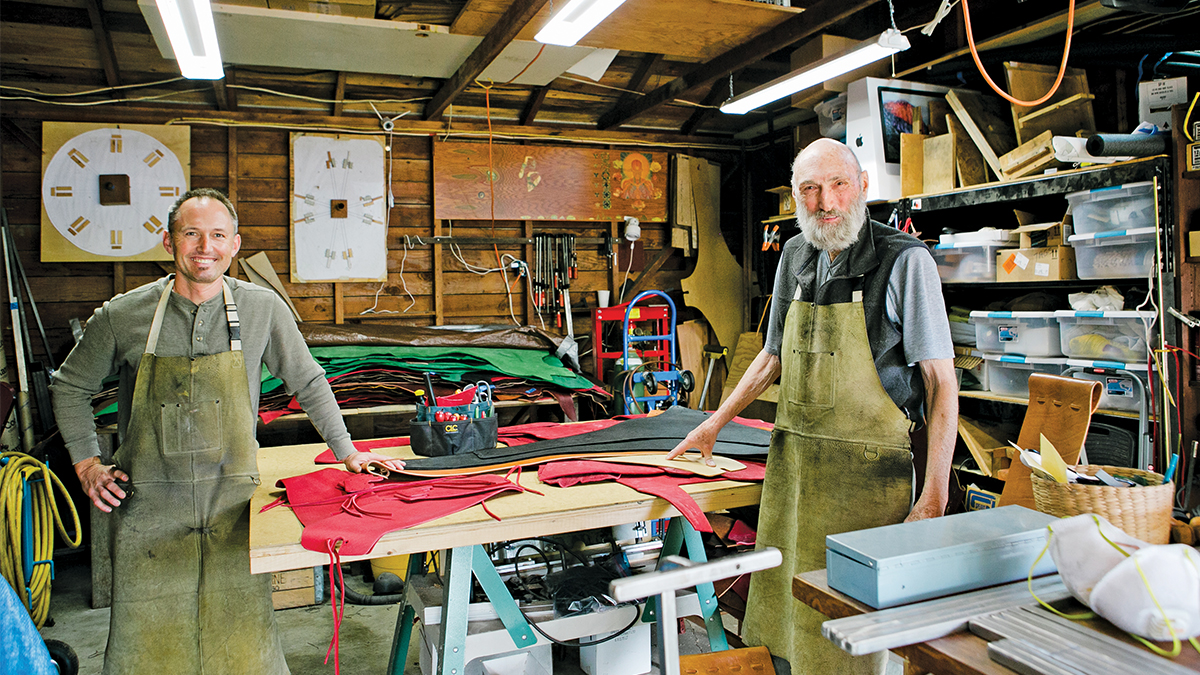 With a glimmer in his eye and a toothy grin, Daniel Wenger advises doing what you love and loving what you do. But that’s not easily accomplished when you’re a jack of all trades.

Wenger is a former U.S. Space Program computer programmer and former UCSC humanities computer director. He says he was the first to introduce dial up internet to Santa Cruz, with only three or four clients including T. Mike Walker.

Daniel later founded the furniture company Wenger Designs after he began making steel and leather furniture in the late 1960s. He is best-known for his mid-century modern lotus chair, of which he’s made around 300 to date. In addition to furniture, Daniel also makes sundials—one of which was in San Lorenzo Park in the ’70s—and large cube structures.

When his son Sam was born, Daniel took some time off from furniture-making, landing a job at UCSC as a computer director in the humanities division. After a 30-year hiatus, he returned to furniture-making a decade ago when a couple asked if he would make them another lotus chair to replace the one that they had regrettably sold.

That was the beginning of Daniel’s return to the furniture business. A couple of years later, his son Sam moved back to Santa Cruz and partnered with him in their current father-and-son design company. Today, Wenger Designs ships dining and lounge chairs, bar stools, and coffee tables to galleries and customers all over the world. Since they began working together, they say that their work has evolved—they use new colors and finishes and have become more precise in their measurements.

“I remember there was a pending order for some chairs, and my father asked me to come over and help bend some steel,” Sam recalls. “I had no idea what was in store and we started bending it and did it all by eyesight. I thought ‘there has to be a better way than this,’ and I was immediately interested in streamlining the process and accuracy.”

Daniel and Sam have begun using a thicker steel on the larger lotus chair frames to make them stronger and more substantial. They say they are also tweaking the comfort levels of the chairs and trying to focus on repeatability, so that the chairs are more consistent.

“It’s a convergence toward something that we are happy with in the long term,” Daniel says.

The Wengers cut and measure the leather and shape the steel frames themselves in their home garage. Their workshop is full of tools scattered alongside large steel frames, with various leather hides piled high. They use around 20 to 30 hides annually, sourced mostly from Tennessee and Napa Valley. From start to finish, it’ll take them anywhere from six to 10 weeks to fill a custom order, depending on the color and type of piece.

“People are surprised that it takes that amount of time,” Daniel says. “Some people think that they can do it in six hours.”

In an increasingly technological world, true craftsmanship is a rare luxury. Between Daniel, Sam and three-year-old Hunter, the three generations of Wenger men walking around the workshop is a refreshing time warp.

“It’s nice to work with your hands, and there is just a real joy in finishing off a chair,” Daniel says. “It smells good and looks good and it’s comfortable. Then you know its going off to a show or a customer and it’s a sweet parting. You have it in your existence for a short while and then it is gone.”

“There is also a real process from just seeing the steel on the ground, cutting it, sanding it, bending it, grinding it, and transforming it,” Sam adds. “Then you add the leather and just the feet and lacing, it’s a real sense of accomplishment. It’s really rewarding in an artistic sense.”

The Wengers say their steady stream of commissions provides income for the family while allowing them the flexibility of doing other things. Sam holds a bartending job and Daniel has free time to work on his genealogy database and “watch the Washington drama” unfold.

Daniel says some have unsuccessfully tried to copy the lotus chair a number of times. “It goes on,” he says with a seemingly uncaring shrug. Looking back, Daniel says that he is glad that he had the freedom and flexibility to leave his other professions and focus on furniture-making full-time.

“I want people to know that they should be engaged in doing what they want to do,” he says. “That’s what the message is: do what you want to do.”

Wenger Designs furniture will be available for purchase at Agency, 1519 Pacific Ave., Santa Cruz, through June and online at wengerdesigns.com. Agency will have limited hours, call for more information.