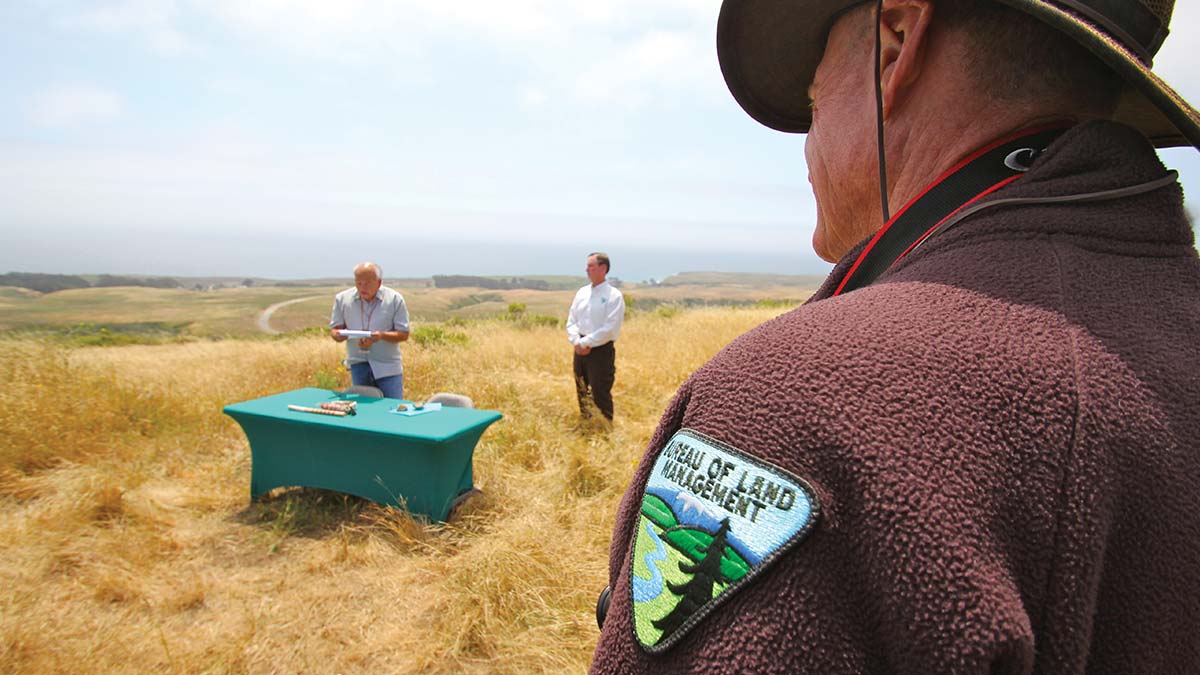 Striking a traditional wooden percussion instrument with his palm, Valentin Lopez sang his Native American tribe’s prayer during a ceremony at the Coast Dairies property last month, as people gathered around. He sang alone, in a voice strong and forlorn, using the ancient words of the Amah Mutsun.
The Amah Mutsun are a Native American tribe that dwelled in the expansive stretch of land, nestled in by the ocean and the grass-covered western slope of the Santa Cruz Mountains, with Año Nuevo State Park bordering it to the north, and the Salinas River to the south.
Lopez is the president of the Amah Mutsun Tribal Band, made up of the descendants of the ancient tribes that once roamed over the area. Even today, the Amah Mutsun use prayers, song and ceremonies to call back the salmon and migratory birds or to sing for the balance of the four seasons.
Joining Lopez and his fellow tribe members at the May 25 ceremony were officials from the Bureau of Land Management (BLM), UCSC, Santa Cruz County government, and the Sempervirens Fund.
At the ceremony, the descendents of the area’s indigenous people signed a memorandum of understanding (MOU) with the land managers of the Coastal Dairies property.
With the new MOU, the tribe enters into an agreement with the Bureau of Land Management, the federal agency in charge of managing the bulk of the Cotoni-Coast Dairies property.
The tribe will have an equal partnership in decisions relating to the property, like management of native plant species, participating in preservation techniques to allow wildlife to flourish and undertaking a more culturally sensitive approach to archaeological study.
“It is not only the prayers and ceremonies of Native people that are needed to save Mother Earth,” Lopez says. “It is the prayers and ceremonies of all people.”
Under its deed, BLM must create a land management plan that protects vegetation, the land, and opportunities for recreation, says Rick Cooper, a field manager for BLM.
Against the backdrop of the partnership, Santa Cruzans are playing wait and see, while Santa Cruz County leaders call on either Congress or President Barack Obama to issue a declaration that would turn the BLM’s 5,741-acre property into the Cotoni-Coast Dairies National Monument—a nod to the former ranching area’s 20th-century landlords and livestock, as well as its original inhabitants.
The whole process began in 1998, when the Trust for Public Land purchased nearly 7,000 acres of property from the Coast Dairies and Land Company. The sprawling swath of rolling hills, rocky coastal bluffs and rugged beaches located just outside Davenport represented the third-largest privately held coastal property from San Francisco to Mexico.

Lessons from the tribe

When the Spanish first arrived in Amah Mutsun territory in 1797, they found a network of distinct villages spread up and down the Monterey Bay.
The Cotoni people were a distinct tribe with their own language that settled the area that is modern-day Davenport, as well as the ridgelines, swells and redwood-dotted hills that comprise its surroundings.
The Spanish, who scorned the Amah Mutsun culture and perspective, persecuted the natives by attempting to eradicate their culture, forcibly converting them to Christianity, while enslaving them to help construct the California missions.
That scorn intensified with the arrival of white American settlers from the east in the 1840s and 1850s. Fresh off of battles with the Native Americans of the Great Plains, the settlers violently battled the natives and discounted their perspectives on harmonious living with nature—opting instead to exploit the forests for timber, the rivers for power and the wildlife for food.
About a century and a half later, large-scale environmental disasters loom, Lopez says, with the threats of climate change approaching, ocean acidification on the rise, the coast eroding rapidly, and air quality declining. The human family, he says, is harkening back to the Native perspective of harmony within nature rather than dominion over it.
“It’s about restoring relationships,” Lopez says. “A big part of this MOU is restoring the spiritual connection to Mother Earth and returning people to an understanding of the connections we have with all things.”
The Amah Mutsun tribe is not federally recognized and therefore does not have land, unlike tribes in the Midwest such as the Lakota and Navajo people. They did, however, recently create a land trust that could allow the tribe to purchase land parcels or enter into management agreements.
“We plan on incorporating indigenous management techniques into the practices here,” says Rick Flores, a traditional resource management specialist with UCSC. “Hopefully, we will try to restore some of these landscapes back to what they may have looked like prior to contact.”
Rick Cooper of BLM says the tribe’s presence will extend beyond incorporating traditional techniques into management of flora and fauna. Cooper has talked with tribal leaders about creating an educational program for kids about the traditional uses of land on the property. “They can come out and look at [the land] and do traditional practices that their ancestors did,” Cooper says.
Lopez says the descendants of the Cotoni are scattered, many living in Fresno, having been chased out by the Central Coast’s high cost of living. But he says practicing the rites of the tribe on ancestral lands will help members heal from the depredations of European settlers.
“Our history is tragic. The Mission period, the Mexican period and the early American periods were devastating to our peoples,” Lopez says. “The Indian population of California was reduced by over 96 percent. The ancestors said our peoples will suffer for seven generations and then things will get better.”
BLM has yet to say when members of the public may begin to access the land, where some Davenport residents are hesitant about what the designation could mean for their sleepy beach town. In the meantime, California State Parks runs about 400 acres of the Coast Dairies property, which includes seven beaches just south of Davenport. The Trust for Public Land has also retained a few parcels located adjacent to agricultural operations in the interest of keeping agricultural uses open, Cooper says. BLM plans to begin scoping sessions, for locals to describe which recreational activities they would like to see—such as mountain biking, equestrian uses and hiking. But the agency has delayed the survey to late summer at the earliest.
Lopez says it is important that the Amah Mutsun receive a portion of redress for historic crimes and be able to walk the hollows and hills where they believe the spirits of their ancestors dwell.
“We believe the Creator very specifically picked our people to live on these lands and to care for all living things,” Lopez says. “After we were ripped from our lands we were unable to fulfill our sacred covenant, but the directive from the Creator was never rescinded.”