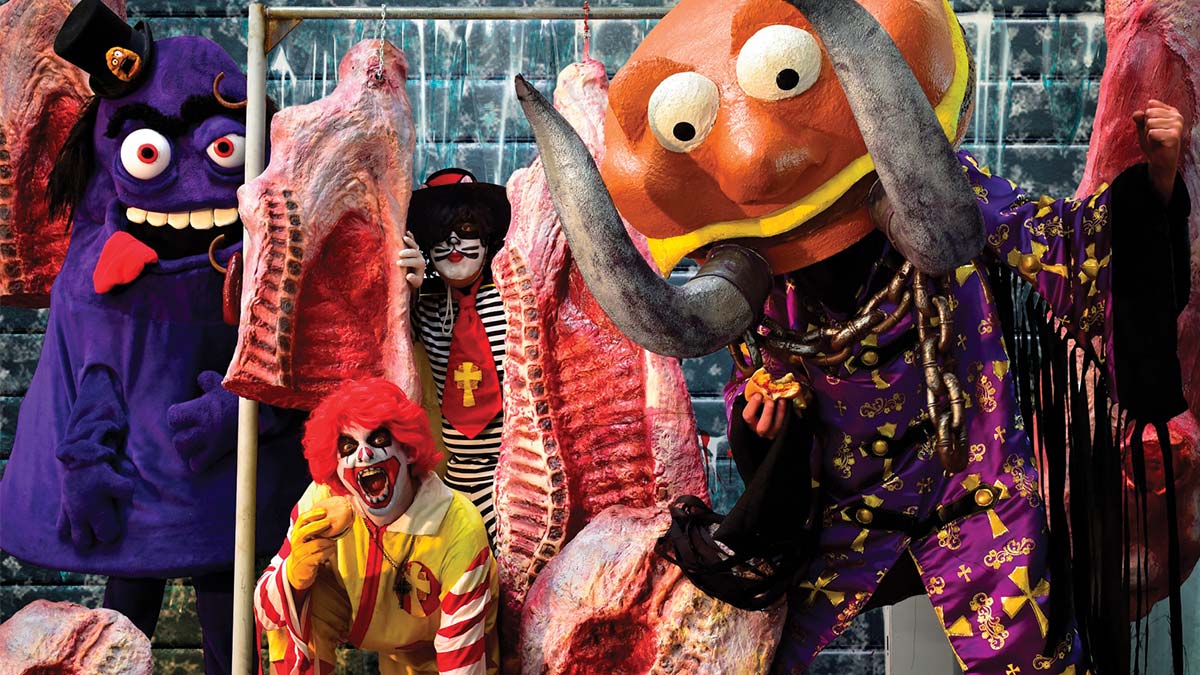 Finally, the music of Black Sabbath and the burgers of McDonald’s have come together to create Mac Sabbath. But really, this band is much weirder than a metal group that sings about fast food. If its backstory is to be believed, the group was formed by scary clown Ronald Osbourne, who time-traveled into the present time from the ’70s to warn the world of the dangers of fast food, GMOs and the corporatization of food.
Their stage show involves dark, psychedelic versions of Ronald McDonald (Ronald Osbourne), Grimace (Grimalice), the Hamburglar (Cat Burglar) and Mayor McCheese (Slayer MacCheeze). All of the songs are based off of Sabbath favorites, but the lyrics have been altered. As goofy as it may seem, it’s a political statement: (“Everybody wants it/On gluten bleached flour bread/Everybody needs it/Till they’re fat and dead.”) Unfortunately, the band does not interview, but we were lucky enough to score an interview with manager Mike Odd, who attempted to give us some insight into this peculiar, brutal group.

GT: How’d you find these guys?
MIKE ODD: I used to run this odd emporium. It was kind of a freak museum in East Hollywood. I got this anonymous phone call saying to meet somebody at this burger place in California and it’s going to change my life. I’m sitting in this booth waiting, and this abomination of a clown bursts through the door, just spewing all these concepts all over everyone’s lunches and just saying all these incredible things. I thought I was on a hidden camera show or something. He proceeded to tell me that it was my destiny to manage this band Mac Sabbath. He shows me these mutated versions of mascots from my childhood, slamming out these Black Sabbath songs, changing all the lyrics to be about fast food and screaming about GMOs and Monsanto and chemicals that I can’t pronounce. It was the most amazing thing I’ve ever seen. I made this video of them and posted it on YouTube and I put the lyrics at the bottom of the song “Frying Pan,” which is a parody of “Iron Man.” In no time at all it got picked up by Fox News, and then Black Sabbath posted it on New Year’s Day 2015. Right away the phone starts ringing.
What do kids think of Mac Sabbath?
I find that not only do they really like it, they get it better than adults. I think sometimes the message is lost on adults. Someone in their 20s or 30s will love the show and then afterwards go to the drive-through and get a cheeseburger. One of the first things I booked them at was a Halloween party at an elementary school for kids. There was one part where they were on stage, and this lady comes up to me and she said, “This is amazing. You should do this more often. It’s so great for kids.” At one point we could book a tour with clubs at night for drunks and the elementary school during the day at the cafeteria and do a special set about health food, and involve Michelle Obama or something.
The mission of the band is to promote health food?
That seems to be a thing with Ronald. He’s very anti-Frankenfood. He’s told me that he’s traveled here through the time-space continuum from the 1970s to warn us all about government food control, and wants us all to get back to the way it was in the 1970s, when music and food were genuine. That’s his whole thing.
What are these characters like off stage?
Ronald is the tough one. Everyone else seems pretty blissfully happy, and seems to enjoy what they do. Ronald’s always got a conflict there. I think part of it is his non-technological state and inability to adapt. None of this existed back then, that’s why you have to talk to me. I have to be a conduit to this world. He doesn’t like any talk of modern technology. I’ve seen him dump somebody’s cell phone into a large bowl of water.
What’s one of your favorite renditions of Black Sabbath the groups does?
It’s really exciting for me that the band started playing “Organic Funeral.” It goes further than most of their songs and is very specific about certain things wrong and certain chemicals that are legal in this country, but illegal in other countries. It’s really an attack. It’s an a lot more aggressive attack on certain evils that we’re dealing with right now in our government.