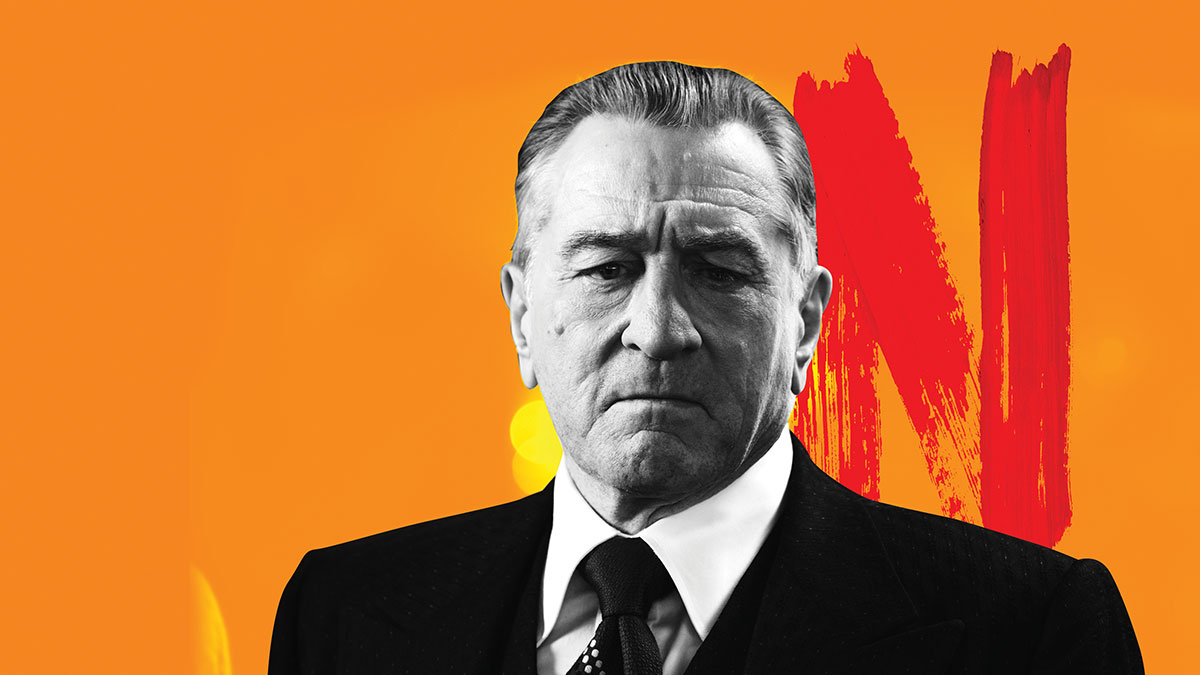 On a summer day in Santa Cruz in 1997, two guys came out of Logos Books & Records on Pacific Avenue, one of them carrying a newly purchased used CD of Patsy Cline’s greatest hits. Neither was particularly jonesing to hear Patsy’s famously plaintive contralto. In fact, any CD—Tiny Tim, Twisted Sister, whatever—would have sufficed.

Patsy did not go into a CD player that day. Instead, she was slipped into a self-addressed stamped greeting-card envelope (sans jewel case), escorted to the Santa Cruz main post office, and put into the mail.

From that otherwise banal moment on an otherwise ordinary day came a revolution that has turned the movie and television industries upside down.

That was the day Netflix was born.

The men visiting Logos were Reed Hastings and Marc Randolph, who together created the company that has changed not only how millions around the world watch movies and TV, but which is also now challenging the hegemony of Hollywood in how entertainment is produced. Along with Google, Facebook and Amazon, it ranks among the most massively successful businesses of the 21st century.

But back in ’97, they were just a couple of schemers, trying to figure out a way to take advantage of this new tool called the internet. Their story is told in Randolph’s exhilarating new book That Will Never Work: The Birth of Netflix and the Amazing Life of an Idea.

The pair had already been kicking around the idea of an online video rental business. But the format of the times, the VHS tape, was too big and too heavy. Handling costs would have been prohibitive. They had, in fact, already scrapped the idea when the buzz began to grow about another format, the DVD, being developed in Japan.

They didn’t have a DVD—nobody outside of Japan did at that point. But they knew it would be identical to a compact disc. So they needed to see how the U.S. Postal Service would treat a vulnerable 5-inch plastic disc.

By that time, Randolph had already put in 20 years in direct marketing and sent out millions of pieces of mail.

“I had been to the San Jose central post office,” he told me in an interview in Scotts Valley, right across the street from the site of Netflix’s first office. “I’d seen those machines shoot those letters through at 16 gazillion miles an hour and bend them around corners, and all that.”

He was certain that Patsy Cline—whose biggest hit was I Fall to Pieces—would arrive to them in pieces.

The next day, Hastings and Randolph met in a parking lot in Scotts Valley, just as they did every day, for the carpool over Highway 17 to their tech jobs in Silicon Valley. Hastings nonchalantly handed Randolph the square envelope, containing the CD, in one piece. For 32 cents, the price of a stamp.

It was not, however, the classic a-ha moment. It wasn’t like BoJack Horseman appeared to them on Highway 17 and laid out the whole glorious future ahead of them, Randolph says.

“It was more akin to finding the missing piece of the jigsaw puzzle under the couch,” he says. “We had this puzzle that we couldn’t complete. So we walked away from it. Then we found the piece that finished it. If the book is about anything, it’s not an epiphany story, nor is it some brilliant visionary CEO story, either. It was just luck. Lots of luck.”

Many months later, when the Netflix idea was already well underway, Randolph learned exactly how lucky they had been. He writes in That Will Never Work that he was given a tour of the Santa Cruz post office and discovered that cross-town mail was handled in a different way—a gentler way—than out-of-town mail. If they had mailed Patsy Cline to anywhere else than Hastings’s Santa Cruz address, even to Randolph’s Scotts Valley home, the CD would probably have gotten scratched or broken. “And I wouldn’t be writing this book,” he wrote.

Netflix is not the only tech behemoth for which Santa Cruz is part of its origin story. According to Brad Stone’s 2013 book The Everything Store: Jeff Bezos and the Age of Amazon, Amazon founder Jeff Bezos visited Santa Cruz in 1994 to pitch some computer programmers on his idea for an online bookstore, and went as far as looking at office space in Santa Cruz.

But the Netflix story is more than incidentally about Santa Cruz. Randolph, 61, first came to Santa Cruz County in the late ’80s to work at the Scotts Valley-based software firm Borland International. He fell in love with the place, and part of his entrepreneurial vision before Netflix was to somehow establish Santa Cruz as a conducive place for tech.

“I did like the lifestyle aspects of Santa Cruz,” he says. “Being able to surf in the morning or go for a trail run. I really liked that the networks in Santa Cruz weren’t all Silicon Valley people. There was a diversity here—not necessarily in a racial sense, but more a diversity in viewpoint and background. I just felt that the range of people walking on Pacific Avenue was remarkable.”

Randolph was the original CEO of Netflix, but he left the company in 2002, and his new book is an often-funny, sometimes-harrowing romp through those early years of getting established in Scotts Valley. If the idea to send DVDs through the mail had been the company’s only innovation, it probably would have quickly sank in the swamp of internet get-rich schemes, particularly given the absolute dominance of Blockbuster and its competitors in establishing consumer habits when it came to watching movies at home.

The innovations had to keep coming, and Randolph and Hastings were up to the job. In the early days, when DVDs had reached the tipping point toward market dominance, Randolph remembered standing in the middle of the company’s San Jose warehouse looking at more than 100,000 DVDs. “I thought, why are we storing these here?” he says. “I wonder if there’s a way to store them at customer’s houses instead. Then Reed said, ‘Let’s let them keep the DVDs as long as they want. When they’re done with one, we’ll send them another one.’”

That was quickly followed by two other innovations that taken together spelled doom for the Blockbuster era: Charging customers a flat monthly subscription fee, rather than making them pay for each movie, and creating the famous Netflix queue in which customers could create a priority list of what they wanted to see and have it automatically delivered.

Early on, before Patsy Cline, Randolph and Hastings had developed a ritual. As the two took turns driving over 17, Randolph would pitch Hastings with an idea. And Hastings would, more often than not, deliver the verdict from which Randolph titled his book: “That’ll never work.”

Randolph’s pre-Netflix ideas were, in hindsight, not exactly brilliant: home-delivery shampoo, personalized dog food, custom-built baseball bats and surfboards. The Netflix idea developed in stages, after hours of research and discussion, and through a series of timely actions and lucky breaks. The Patsy Cline moment was a turning point, but there was no light bulb, no apple falling on Newton’s head, no epiphanies.

“Distrust epiphanies,” Randolph writes in That Will Never Work. “Epiphanies are rare. When they appear in origin stories, they’re often oversimplified or just plain false.”

Before he met Reed Hastings, Randolph was a veteran in marketing. He was a co-founder of MacUser magazine and started two of the first mail-order catalogues for computer products in the pre-internet days. He worked for years at Borland. Eventually, he helped found a start-up that was bought by a software development company run by Hastings, who decided to keep Randolph on after the merger.

Randolph’s tale takes on many of the roller coaster elements of start-up culture, from finding funding to recruiting talent to building an inventory to deciding on a name (among the names that lost out to Netflix were CinemaCenter, Videopix, SceneOne, E-Flix, and NowShowing. Of the final choice, now a familiar touchstone around the world, Randolph writes: “It wasn’t perfect. It sounded a little porn-y. But it was the best we could do.”)

The site launched in April 1998, and the book provides a tick-tock account of the site’s first days and weeks (Predictably, the server crashed the day of the launch). In the days before the company’s trademark red envelopes clogged mailboxes coast to coast, Netflix needed a marketing break. That came from an unlikely source: President Bill Clinton, who was at the time consumed in scandal. Randolph decided to offer Clinton’s full grand-jury testimony on the Lewinsky scandal on DVD to all customers for the price of 2 cents. That stunt got the media’s attention, and suddenly Netflix was news.

But by the next year, Hastings replaced Randolph in the CEO’s chair, Randolph took on the role of company president, and Netflix moved up Highway 17 from Scotts Valley to Los Gatos.

Netflix’s permanent residence in Santa Cruz County was not destined to be, for the most prosaic of reasons: geography and personnel.

“One of the fundamental miscalculations I made,” says Randolph, within sight of Netflix’s first office, “was that I assumed that the type of engineering talent we would need would be the ‘front-end’ talent: web design, user interface, etc. But it was really the ‘back-end’ people (servers, database administration) that we needed. And they were all clustered around Oracle in Redwood City. Try convincing someone from there to drive here, especially considering the amazing job opportunities they had closer to home.”

Even when it became inevitable that the company would have to move operations to the South Bay, Randolph wanted it in Los Gatos. “The thing I did fight for was, if we had to go over-the-hill, it had to be barely over the hill, as close as I could get. If I could have put it in [famous Highway 17 restaurant] the Cats, I would have. But we got University [Avenue], this side of Lark. That’s pretty darn good.”

Still, the company began its amazing life in Scotts Valley. It was there that they kept their first DVDs in an old bank vault, developed the business model that contributed to the company’s early success, and helped break Blockbuster’s hold on consumer home viewing habits.

Today, Randolph is unsparing on himself about moving the company out of Santa Cruz County. After leaving Netflix, he assumed a seat on the board of Looker, a data-analytics company based in Santa Cruz.

“It’s a big regret,” he says of leaving Scotts Valley. “It was a big failure on my part. But my karma has been restored with Looker. From the very beginning, we wanted this to be a Santa Cruz company and stay a Santa Cruz company. Luckily, I learned a few things about how I messed up the first time.”

Looking back at his role in the creation of one of Silicon Valley’s most powerful companies, Randolph says, “I’m a huge optimist. I’m not just a glass-half-full person. I’m overflowing. I’m a believer. I can believe anything can work. It’s just my nature. And it’s also a powerful viewpoint when you keep trying things that everybody else says, ‘That’ll never work.’ Still, you can be astounded when something really does work, especially Netflix, when it took so long to figure out how to get it to work.”