.New Sausage Cart in Town: Suns Out Buns Out 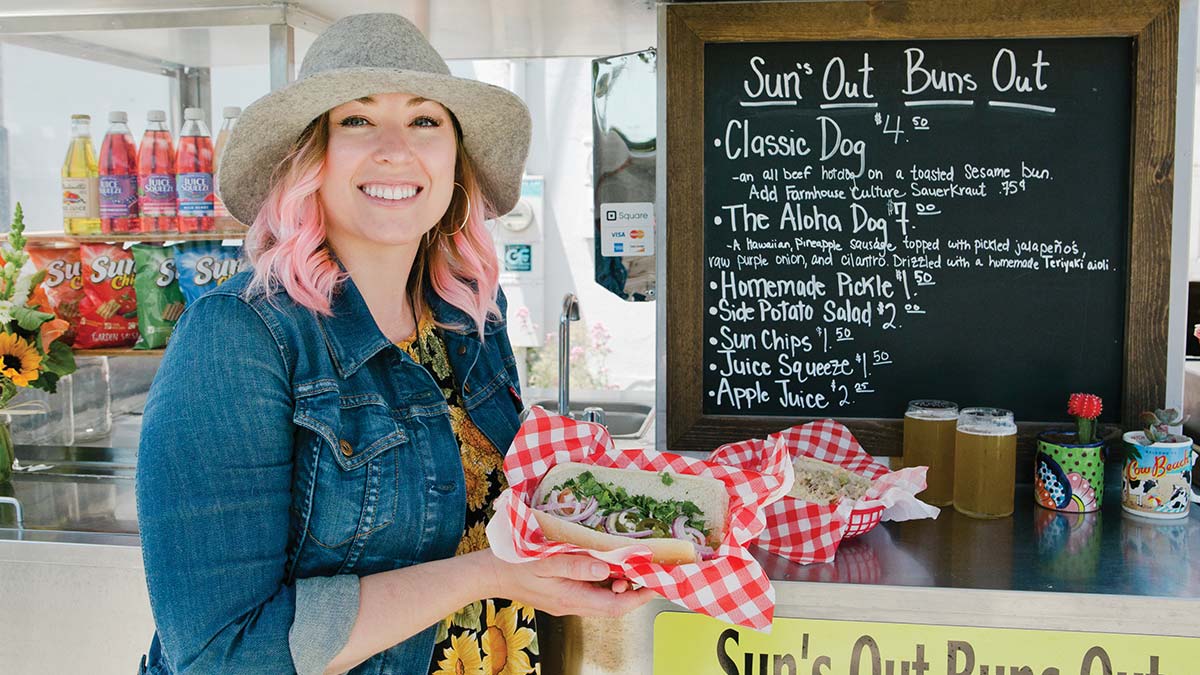 On a sunny afternoon at Corralitos Brewing Co., an enticing and familiar smell beckons me from my IPA toward a gleaming hot dog stand. Brittany Crass beams from under a sun hat as she takes my order for a Reuben. A few minutes later, she hands me a hefty red and white-checkered paper basket: A well-toasted bun cradles a smoked beef sausage smothered in tangy kraut, swiss cheese and Thousand Island aioli. Eaten standing over a barrel, I engaged in the struggle of trying to get each delicious component into every bite. It tasted like summer. And also like my favorite sandwich from a Jewish deli I frequented in New York.
Crass is carrying on the timeless tradition of hot grilled meat on a bun with her sausage cart, Sun’s Out Buns Out. Her mobile eatery boasts all the traditional trappings, but the sausages she serves have enough creative oomph to make the American classic feel new again.
Crass sources a variety of dogs from the famed Corralitos Meat Market and personalizes them with unique recipes catered to the atmosphere of the venue—usually one of Santa Cruz County’s 11 (soon to be 15) craft breweries, as well as special events. Visit her at East Cliff Brewing, a pub that specializes in traditional English ales, and you’ll find a banger topped with mashed potatoes, peas and caramelized onions. A recent movie night at Santa Cruz Mountain Brewing featured a surf film set in Hawaii, and she offered a pineapple sausage with pickled jalapeños, red onion, cilantro and teriyaki aioli. For those feeling less fancy or carnivorous, a classic all-beef dog and meatless sausage are always on the menu.
“I love taking something simple and making it a fun experience,” says Crass. “There’s so much you can do. It’s kind of like beer. You start with simple ingredients but the creative possibilities are endless.” INFO: facebook.com/SunsOutBunsOutHotDogs.

The Santa Cruz Beer Trail has released the first passport just for breweries. The custom-designed booklet is the brainchild of Brew Cruz owner Annie Pautsch and marketing partner Bryce Root. Entirely hand-drawn by local artist Joe Fenton, the passport includes deals for every brewery, local craft beer history and other bits of beer geekery meant to encourage you to explore the rapidly growing scene. The $25 passport has no black-out days and can be purchased at santacruzbeertrail.com—where you can create your own customizable beer trail map—and at New Bohemia Brewing Co., and Seven Bridges Organic Brewing Supply.