.A New Smoothie Hub in Aptos 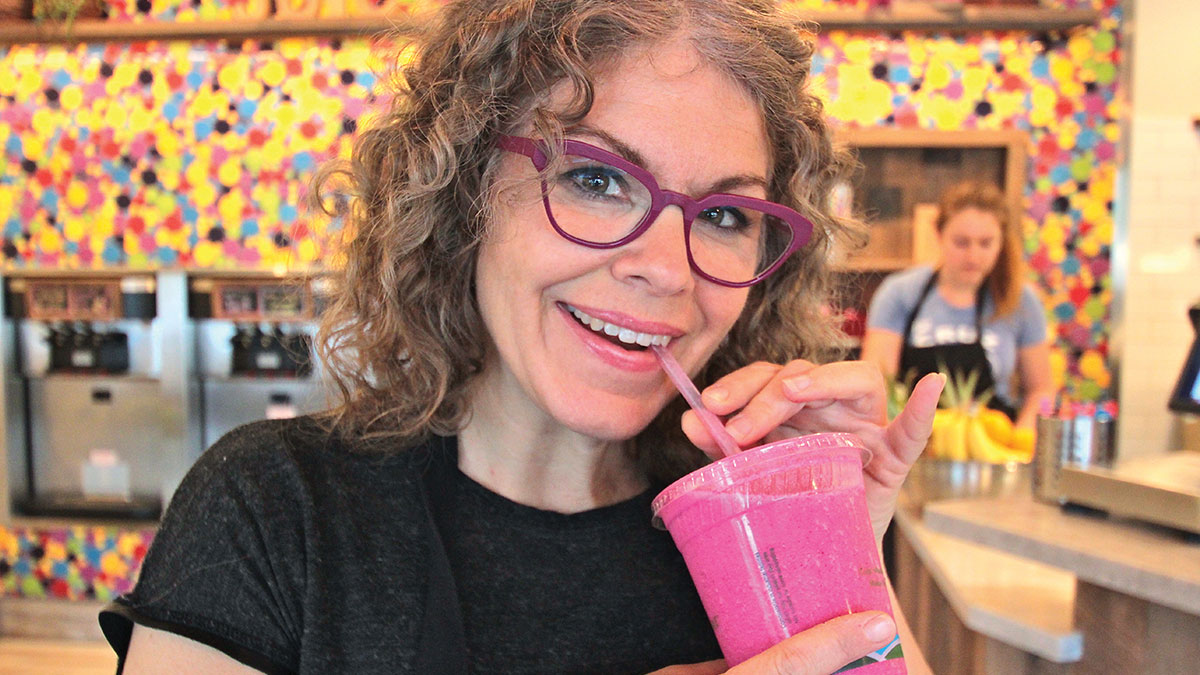 Aptos has been in desperate need of a good juice-smoothie-frozen yogurt spot, so Diane Carver and John Lindberg took matters into their own hands.
Owner Lindberg wanted to open a frozen yogurt joint, and general manager Carver had been dreaming of opening a juice/smoothie shop for 10 years. They collaborated on Juicy Sweet, which opened in January. We spoke with Carver who is behind all the recipes, some of which she invented years earlier.
With so many smoothie and frozen yogurt places, it can be hard to stand out. What’s your emphasis?
DIANE CARVER: A lot of it is on health. The smoothies are all whole food, nutrient-based. But then there’s fun, too. We have 36 toppings for frozen yogurt. It’s all self-serve, and a lot of fun toppings: chocolate-covered marshmallows, we have chocolate Sriracha sauce—it just has a little heat to it. Sriracha is so popular on everything now. Might as well mix it with chocolate.
What do you recommend to first timers?
It seems like a lot of people like the Yogi Berri, which is fruit and yogurt. The Face Lift is our most popular juice. It has apple, lemon, a lot of greens: kale, spinach, celery, cucumber.
What about for smoothies?
I’d say the Holy Cacao. It has raw cacao powder. That one’s really healthy. It has maca, coconut oil, almond butter. It’s really rich and creamy. It has a chocolate shake consistency.
You do juice shots as well?
Our most popular juice shot is the Cough Drop. It hits all the senses. It has pineapple, apple, there’s a little bit of Himalayan salt and honey. It’s really good. All the juices are beneficial, health-wise. The Cough Drop is for people who aren’t feeling good. It has honey, which soothes your throat. Salt and pepper helps clean out your lungs. There’s usually a purpose to them. But I’ve put a high value on balancing the flavors, and it appeals to everybody, even the novice juicer to the veteran juicer. They’re all going to like it. It has a lot of flavor.
What’s your most unusual juice?
I’d probably say the Pink Dragon. It has dragon fruit, or pitaya. So it’s a bright pink color. It also has cinnamon. It’s a nice combination of flavors, nothing that really overwhelms you. Pitaya is a little bitter, and then the pineapple sweetens it and then the cinnamon adds a nice spice. It’s a hard one to explain, actually. It’s very creamy. It has a little vanilla in there, too.
For more info, visit juicy-sweet.com.

Next ArticleRob Brezsny’s Astrology May 18 ­— May 24