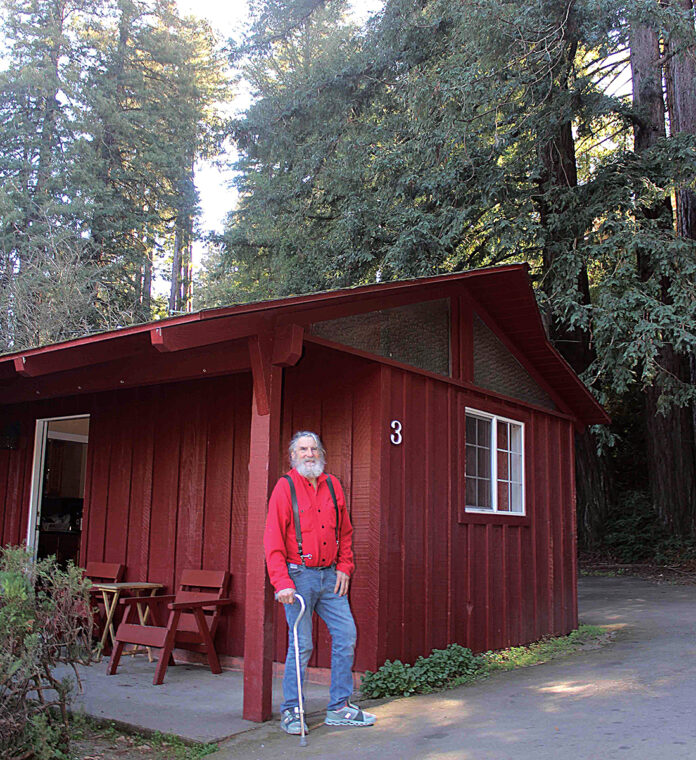 At an afternoon gathering in Ben Lomond Saturday, local service providers united to mark the opening of a housing project meant to help veterans get and stay off the streets.

The Veterans’ Village, formerly Jaye’s Timberlane Resort, features a series of 10 rustic cabins swathed by dense redwood forest, right along Highway 9. And officials say once the previous operators are able to find a new house to live in, there will also be a larger residence that can be used to house a veteran’s family. Later on, they hope to fill in the pool and install eight modular units, too.

C. Stoney Brook, president of the United Veterans Council for Santa Cruz County, says the Village is part of an evolution that started with a restorative justice program for former soldiers a few years back.

“We realized we were getting them out of jail and onto a path, but they had nowhere to live,” he said. “We started looking at properties, but we kept getting shut down.”

Brook said the Veterans Village was funded with private money, not government grants.

“I think it says that the community wants a change,” he said. “If you partner with community members you can fix almost anything.”

In the end, Santa Cruz County Bank came through with a conventional loan.

According to Brook, the group has been attempting to be as open as possible about their intentions, adding that, as a former sheriff’s deputy covering San Lorenzo Valley, he understands how important this approach is to mountain residents.

“Up here you know that if you get a bad jacket you’re done,” he said. “That’s why we’re trying to stay completely transparent with what we’re doing. No secrets, no surprises.”

It’s incredible to see the vision come to fruition, he says.

“We initially thought we were going to have to do this from the ground up,” he said.

Meanwhile, local veterans’ support organizations have been working to combat stereotypes about homeless people. Brook emphasizes the residents moving in have been selected carefully.

Then, he left to throw some burgers on the barbeque.

Lois Rae Guin is a trustee with the Aptos-based Veterans of Foreign Wars Post 10110, who served in the U.S. Navy during the Korean War. She says the beauty of the San Lorenzo Valley is quite similar to where she grew up in Pennsylvania, at the foot of the Appalachian Mountains. She believes the Veterans Village will provide emotional medicine for the new occupants.

“It’s peaceful; it’s serene,” Guin said. “It gives them a chance to heal and feel that they’re not alone, be productive and have a good life. And that’s what it’s all about.”

“The whole river was the bathroom and the bathhouse,” he said, adding he went on to fight in Vietnam and now suffers from diabetes and other medical issues after being exposed to Agent Orange.

When asked about the afternoon chatter between attendees around the lawn chairs about different military stories, he says it’s all part of finding a sense of connection.

“We heal each other by sharing experiences,” he said. “Unless you’ve been in combat it’s extremely hard to relate.”

Collier says he has high hopes for the newly-housed residents and sees it as a model for others to follow.

“They stood up for this country,” he said of the veterans. “I know they’ll contribute. They’re excited as heck to be here. This is a beautiful place.”

Jack Dailey, 62, considers himself to be from Auberry, in Fresno County. But he also spent time growing up in Gold Gulch, just south of Felton. Dailey joined the Air Force as a teenager and became a union carpenter after he finished college. Following a couple of divorces, he found himself living out of his car.

“I thought I would be able to get a job and be a carpenter again,” he said. “But I ended up being sick.”

With the pandemic, he was invited to stay in a hotel for a while and was housed temporarily through the Paget House transitional housing program. Now that he finally has a place of his own, he can hardly believe it.

“I’ve been here for two weeks, and think I hit the jackpot,” he said. “I’m quite excited to be back in the redwoods. It’s a beautiful spot. This is God’s country. I lucked out finally. I’m just very happy to be here.”

Another one of the Veterans Village residents, David Crowe, 52, said his dad and brother were born in the area.

“I have been a lot of places and seen a lot of things and I’ve never seen something as amazing as the people in Santa Cruz County,” he said. “There’s not a better location in the world. There’s just not.”

Crowe, a veteran of the first Gulf War, says while the 2005 movie “Jarhead,” which stars Jake Gyllenhaal, shows marines who are frustrated they didn’t get to see more combat action, his experience doesn’t exactly square with this depiction. That’s because he saw dozens of soldiers die on the battlefield and in training accidents, he explains. The mental scars can feel worse later than in the moment, he adds, estimating when you factor in diseases and suicides, probably only half of his unit is still alive today.

Crowe says he finally won compensation from the military—just a few months ago—for the time he was run over by an M198 howitzer artillery gun in 1989, prior to being deployed overseas. And when he got back, he learned the military had lost his personal belongings, he says.

“These are the stories we all have—every single one of us,” he said. “I don’t think that somebody needs to be a combat veteran or a disabled veteran to get military benefits.”

While Crowe’s dream is to buy a house one day, he says the Veterans’ Village is the right place for him to be, for now—a space where people who feel they don’t fit in anywhere else can develop a sense of community.

“We do a good job looking after each other and policing our own,” he said. “I think for Santa Cruz this is a good fit. The veterans deserve it.”

One of his favorite things to do is to take his 1-year-old dog Dakota along the trail by the creek. Sometimes he meditates there, too.

“I literally prayed for this to happen,” he said, thinking of the stability he now has thanks to outreach groups in the region. “I just want them to know how incredibly thankful I am.”