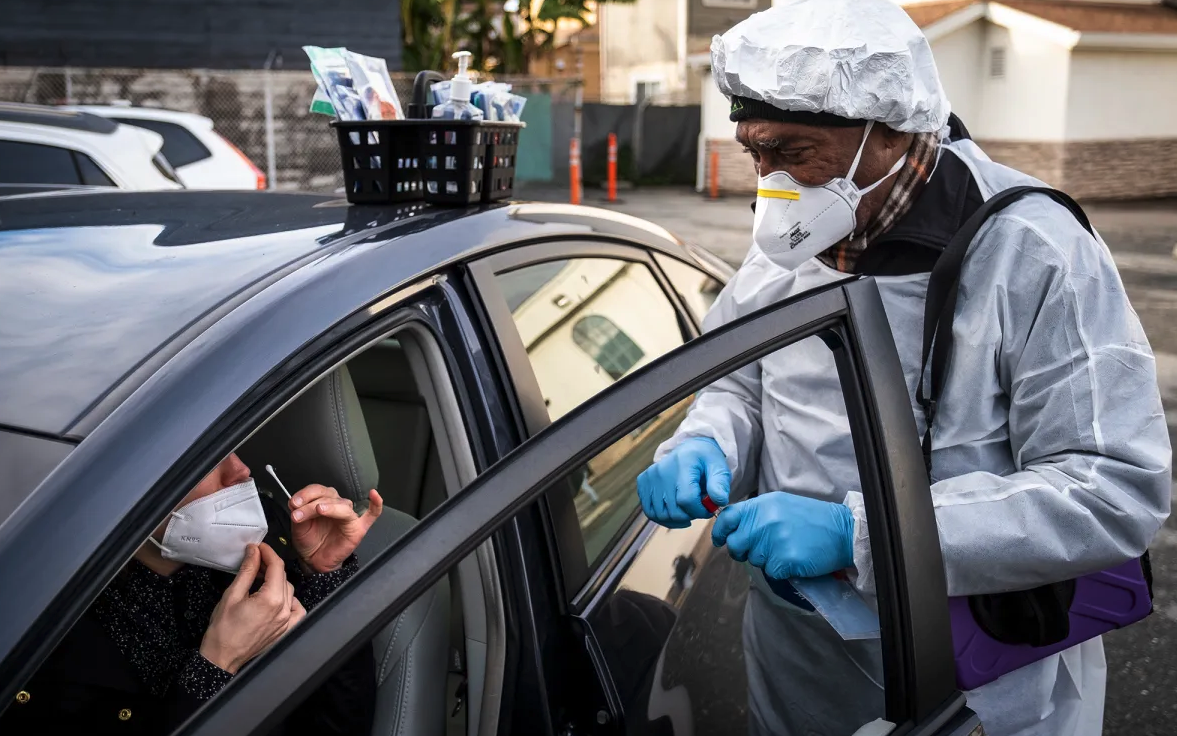 BY ANA B. IBARRA AND  KRISTEN HWANG, CalMatters

Vowing to be smarter after lessons learned over the past two years, the Newsom administration today gave a glimpse of what the next few months — and potentially years — may look like in California with COVID-19 likely to stick around.

Gov. Gavin Newsom’s health secretary, Dr. Mark Ghaly, said the state’s new plan marks a shift in the handling of the pandemic toward preparedness, acknowledging that officials will have to be flexible to respond to any new variants of concern.

“It is clear the virus will remain with us for some time, if not forever. It is less clear how often and how much it will continue to impact our health and well-being,” the state’s plan reads.

The strategy unveiled today includes preventive planning like stockpiling 75 million masks and bringing in 30 million over-the-counter tests, as well as assisting hard-hit disadvantaged communities and schools, and increasing the health care workforce by at least another 3,000 staff if there’s another surge.

The goals: Capacity to  perform at least half a million tests per day and administer 200,000 vaccines per day on top of what’s available at pharmacies or doctors’ offices, expand school-based vaccine sites by 25% and ensure that therapies are available and affordable.

Also included is building on current wastewater surveillance and genome sequencing to have a better understanding of the evolving virus, and pursuing a public-private partnership with a COVID-19 test manufacturer that can secure a supply chain for California.

The administration’s pandemic plan intentionally does not set thresholds that would trigger certain actions, like its controversial multi-colored tiered plan for closing and reopening businesses in 2020.

Instead, flexibility is important now, Ghaly said. For example, a deadly variant may require that the state focus on preventing cases, while a less virulent variant may prompt the state to focus on hospitalizations.

“Today is about balance,” Ghaly said. “Balance between a message of hope and successful adaptation but also prepared vigilance.”

The new blueprint comes as more than 20,000 new COVID-19 cases a day were reported in California, according to the state’s seven-day average on Wednesday. So far 8.2 million infections have been reported and 82,382 people have died since the pandemic began two years ago.

The administration promised to be more precise and targeted in its efforts to combat COVID: “We will be smarter than ever before, using the lessons of the last two years to approach mitigation and adaptation measures through effective and timely strategies,” the plan’s introduction says. “Throughout the pandemic, we have leaned on science and relied on tools that create protection.”

The strategy comes in the wake of two years that have prompted widespread criticism of the state’s handling of the pandemic:

Marking a shift, the state on Wednesday lifted a statewide requirement that vaccinated people wear masks in indoor public spaces, although it is still “strongly recommended.” Masks are still required for everyone in health care settings, prisons and schools. A new four-tier masking system will guide Californians when masks are required and when they’re only recommended.

Dr. Kim Rhoads, a UC San Francisco associate professor of epidemiology and biostatistics, criticized the endemic strategy and the lifting of the mask mandate because returning to “normal” will disproportionately hurt people of color.

“Normal was benefitting certain people and hurting others. That’s how we ended up with these COVID disparities to begin with,” said Rhoads, a long-time community organizer who has helped bring COVID testing and vaccination to Black communities in the Bay Area.

The plan sends a message of “we’re not going to be in the war room all the time,” he said.

Asked if the administration’s plan lacked anything, Rutherford said he thought the plan was comprehensive, and perhaps other states could look at it for guidance.

The state plans to spend $1.7 billion over three years “to recruit, train, hire, and advance an ethnically and culturally inclusive health and human services workforce.”

“We’re behind. We have work to do,” Ghaly said, referencing the need to vaccinate more black and brown Californians.

Newsom, at an afternoon press conference in Fontana, said with the SMARTER plan, the state is moving from a crisis mindset to one where residents learn to live with the virus.

“We are taking a more sensible and, I would argue, more sustainable health care approach based on the lessons learned to prepare for the unknown,” Newsom said.

Some people took to twitter quickly to mock the acronym and the plan. “It’s called the DUMBER plan and will use the exact same strategies that haven’t worked over the past two years,” tweeted one resident who opposes masks in schools.

California — and the world — has been hit by four surges since the pandemic’s start. The winter 2020-21 surge killed the most people. Omicron at its peak recorded nearly three times as many cases in California compared to last winter, although fewer people have died.

Ghaly said Californians should expect seasonal upticks, like when school starts up or during the winter. With that could come masking rules and a need for more testing.

Experts predict that COVID-19 will eventually become “endemic.” To reach that phase, however, infections would have to stabilize, meaning no outbreaks or rampant upticks.

Ideally, that case rate would be much lower than the current rates, county health officials say.

“Right now our case rate is on the high side. It is coming down, which is good to see, but it is still pretty high,” Fresno County’s public health officer Dr. Rais Vohra said in a press briefing last week. Fresno has a 7-day average daily case rate of 67.7 new cases per 100,000 people. Statewide, it’s 42.3 cases per 100,000.

“If the case transmission rate came down to say five in 100,000 people, that would be a really good sign,” Vohra said.

Next ArticleCounty Pilot Program Aims for Unified Approach to Homelessness