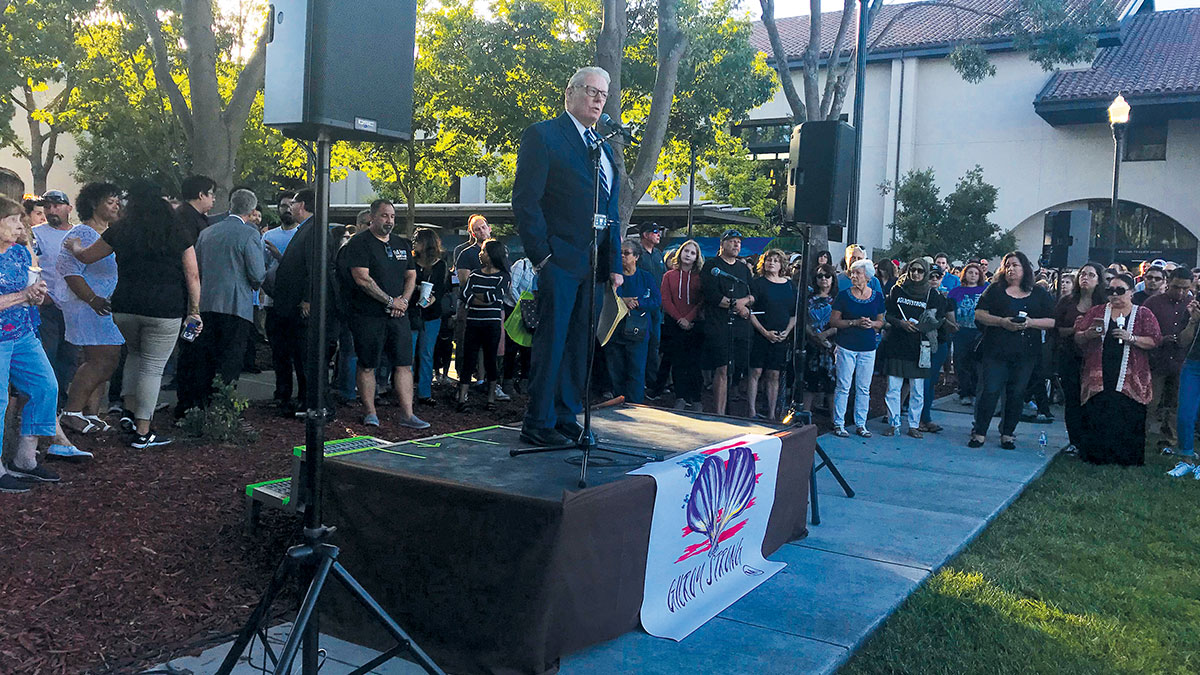 A pair of recent Santa Cruz transplants are thought to have been among those caught in the chaos when a gunman opened fire on Sunday evening with less than a half-hour left in the 41st annual Gilroy Garlic Festival.

Multiple news agencies reported after the shooting that killed two children, ages 6 and 13, that also among the dead was 25-year-old Trevor Irby, a native of upstate New York who friends say moved to Santa Cruz with his girlfriend earlier this year. A Gofundme campaign registered to three of Irby’s classmates from Keuka College also notes that Irby was living in Santa Cruz, and that, “Trevor was an unfortunate victim of the mass shooting.”

Local law enforcement officials were unable to confirm the reports, since all investigations related to the shooting will be handled by authorities on the ground in Gilroy, says Sgt. Dee Baldwin of the Santa Cruz County Sheriff’s Office. Santa Cruz Police Chief Andy Mills adds that his department sent several groups of local officers to help secure the shooting site at Christmas Hill Park, along with other police departments in Watsonville and Capitola.

The Santa Cruz County Fire Department was also among dozens of local agencies to send reinforcements to Gilroy. A spokesperson said that the department sent five engines and one battalion chief to the site on Sunday, all of whom returned that night.

In the meantime, there are still more questions than answers about the events leading up to the shooting. Thick fog had settled in by Monday morning, when rumors started to swirl about social media posts that may have linked the shooter, 19-year-old Gilroy native Santino William Legan, to far-right or racist ideologies. Police confirmed that the 2017 Gilroy High graduate had an active Facebook account, but they did not comment on other accounts or potential motives.

“Everybody wants to know why,” Gilroy Police Chief Scot Smithee said at a Monday press conference.

Also unclear was whether the AK-47-style gun that police said Legan used in the shooting was legal in California, since he purchased the weapon in Nevada.

When the shooting began around 5:40 p.m. on Sunday, Gilroy resident Kelly Ramirez hid in a tent with a group of cheerleaders, two young children and several mothers she described as overcome by “paralyzing fear” since their children were elsewhere in the park.

“Every one of us in this community is now a survivor,” Ramirez said at a vigil held Monday night in downtown Gilroy.

The vigil was organized by Gilroy resident David Almeida, who said he expected only a few people to show up when he created a Facebook event earlier in the day. Hundreds packed the plaza near the police station just over 24 hours after the shooting.

“I thought this would help me process,” said Almeida, who created the event after he said he was unable to sleep or work after the shooting. “But what happened was a lot to process.”

In addition to Irby, speakers at the vigil identified the two other victims as San Jose residents Stephen Romero, 6, and Keyla Salazar, 13. A total of 15 people were injured, including Romero’s mother and grandmother, family members said.

After initial reports that multiple shooters may have been involved in the incident, police on Monday said that they had searched the family home and car of Legan, the grandson of former Santa Clara County Supervisor Thomas Legan. Santino Legan was shot dead by police within a minute of opening fire, investigators said.

State Senator Bill Monning, whose district includes both Santa Cruz and Gilroy, recalled attending the first Gilroy Garlic Festival in 1971. The event has grown in tandem with the city, which is now home to just under 60,000 people. That the shooting happened at the festival, Monning said, only “enhanced” the shock.

“There’s no training manual for responding to this type of tragedy,” Monning said.

Tension and frustration also surfaced at times during the vigil. Speakers like Elsa Lopez, founder of San Jose anti-violence nonprofit A Mother’s Voice, urged those shaken by the event to channel their grief into advocacy for victims.

“We are broken today, and the families are even more broken,” Lopez said. “You might have silenced our children, but you haven’t silenced us. We are their voice.”

As shellshocked residents ran through what-if scenarios—what if they’d stayed at the festival a little longer, or gone back to the park instead of going to see a play?—a sense of shattered peace also crept into speakers’ remarks.

Morgan Hill City Councilmember Rene Spring recalled another shooting just a month earlier in his neighboring town. In that case, three people were killed when a shooter believed to be a disgruntled former employee opened fire at a local Ford dealership and killed two employees and himself.

“Things like this don’t happen,” Spring said of the quiet, culturally diverse Silicon Valley suburbs. “But they do.”