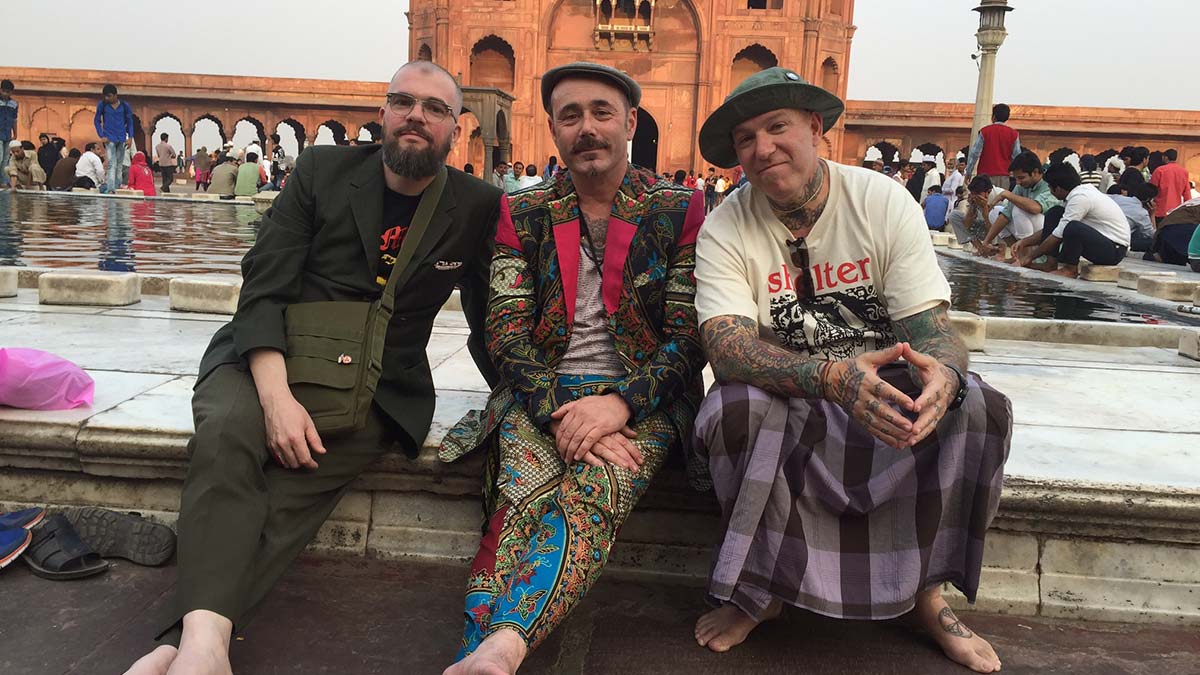 Sometimes there’s a story we have to go back to in order to really do it justice, and this week’s cover story is a good example. A few months ago, Mat Weir wrote a couple hundred words about the Deathless for our Love Your Local Band column, and the minute I read that Santa Cruz is home to the world’s first Buddhist punk band, I thought, “There has got to be a bigger story here.” Not just because combining Buddhism and punk sounds like the most Santa Cruz thing ever, but also because of the people involved.
The mid-to-late-’90s music scene was my favorite ever in Santa Cruz (keep in mind I wasn’t here in time for the Camper Van Beethoven/Spot 1019/Tao Chemical/Special Fun era, and this will probably make more sense). What I think of as the “Bad Monkey bands”—Slow Gherkin, the Huxtables (by association), the Muggs, Exploding Crustaceans, Soda Pop FU, Junk Sick Dawn, etc.—created a smart and hugely entertaining scene that was always a kick to write about.
But if you had told me then that the leader of one of the best bands from that scene, Fury 66, would go on to form a Buddhist punk band, I would have told you it had to be some kind of prank. It’s most decidedly not a prank, and Weir’s story explains exactly how Fury 66’s Joe Clements and Dharma Punx author Noah Levine got from there to here. Kudos to Weir for revisiting this story to tell it in all its hardcore-zen glory.
STEVE PALOPOLI | EDITOR-IN-CHIEF

Filling Gaps
Re: “The Story of Juneteenth” (GT, 6/8): This article was beautifully written and filled a large gap in my knowledge of local history. I learned to celebrate Juneteenth in Los Angeles with my black co-workers beginning in the late 1970s in my work on community agriculture, and continuing on through my youth development work for UC Cooperative Extension in L.A. County over the next 30 years. It felt really good to find out that this celebration has a long history in Santa Cruz. High praise to Good Times and to Geoffrey Dunn for sharing this history with us.
John Pusey | Bonny Doon

River Safety
Re: San Lorenzo River: In a letter recently sent to the city, we outlined photo-documented public safety concerns for the pilot paddling program. We state in our letter that these hazards warrant serious consideration by city staff, city managers, city attorneys, the city council, and the public prior to proceeding with the pilot paddling program now tentatively scheduled for later this year.
To this date there has been no response from city officials that these reported concerns for the welfare and safety of the public have been acknowledged nor investigated. Does this mean public safety doesn’t matter?
The San Lorenzo River levee was designed for flood control, not with human boating safety in mind. The SLR levee is built with rebar, wood, wire, steel, concrete and rocks in the riverbed and along its banks—designed to move water down the river channel.
As members of the San Lorenzo River Advisory Group, appointed by the city council, we helped outline a strategy to address the proposed pilot paddling program. The group gave considerable attention to the birds and wildlife issues. Unfortunately, one issue was entirely overlooked—risks to human safety.
Hazards include:

Gabion wire baskets used to construct most of the length of the SLR levee bank system show significant wear and are rusted with sharp protrusions, blocking safe exit from the levee.
Concrete blocks and rocks used just below the surface along the levee banks are invisible during high water levels, and likely to cause human or boat damage.
Remains of old construction material from a previous bridge include rusted rebar stakes. Potential to impale paddlers.
Wooden log retaining walls line the banks with steel cable wires, rebar, and metal brackets, making any exit in this area dangerous.
More than six tree logs are just below the surface water, placed there for fish habitat management. These logs are invisible just inches under the water, which can easily cause paddlers to fall into water.
There will be unknown risks to paddlers from stepping on debris when getting on or off a boat. Debris includes broken glass, used syringe needles, ceramic pieces, metal and other trash in the SLR channel and on its banks.
A blue-green algae bloom was detected on the SLR in the fall of 2015. This cyanobacterium can produce some toxins harmful to humans, which may be present before testing can detect them.
The proposed pilot paddling program does not address protocols listed by the U.S. Coast Guard or U.S. Paddle Association, including monitoring of minimum age requirement for life jackets and safety protocol for children age 12 and under.  The USCG also recommends proper and legal lifejackets, paddles, leashes, headgear, and registration of boats.

In addition to the listed hazards, if the need arises to get to shore for safety, a paddler will be faced with very limited options for finding a safe exit location.
The full version of our report, with photos, can be found at http://foslrw.weebly.com/dangers-of-paddling.html.
Lisa Sheridan and Jane Mio | Members of the San Lorenzo River Advisory Group

AMERICAN SWIPER
The Santa Cruz County Planning Department is now accepting electronic payments for planning application fees, part of an effort to increase convenience. Know what this means? Government is now entering the 20th century! (Sit tight for it to enter the 21st. Have a cookie!) Starting last week, county officials are accepting such payments both in person and online. A 2.5 percent surcharge is added for credit and debit card payments, while electronic checks, which require an account number and routing number, are free.

RECOVERY MODE
Health and Healing Resources helps people open up and release pain caused by stress, trauma and abuse. Cofounder Natalia Roberti first started by embarking on her own journey of healing from abusive relationships, a car accident, and living with her son in a womenâ€™s shelter. The nonprofit will host an event called â€œFrom Emotional Turmoil to Emotional Stabilityâ€ at 3 p.m. on Sunday, June 26 at 343 Soquel Avenue #333, Santa Cruz. Visit healthandhealingresources.org for more information.

Next ArticleIs it time for a serious conversation about gun laws?