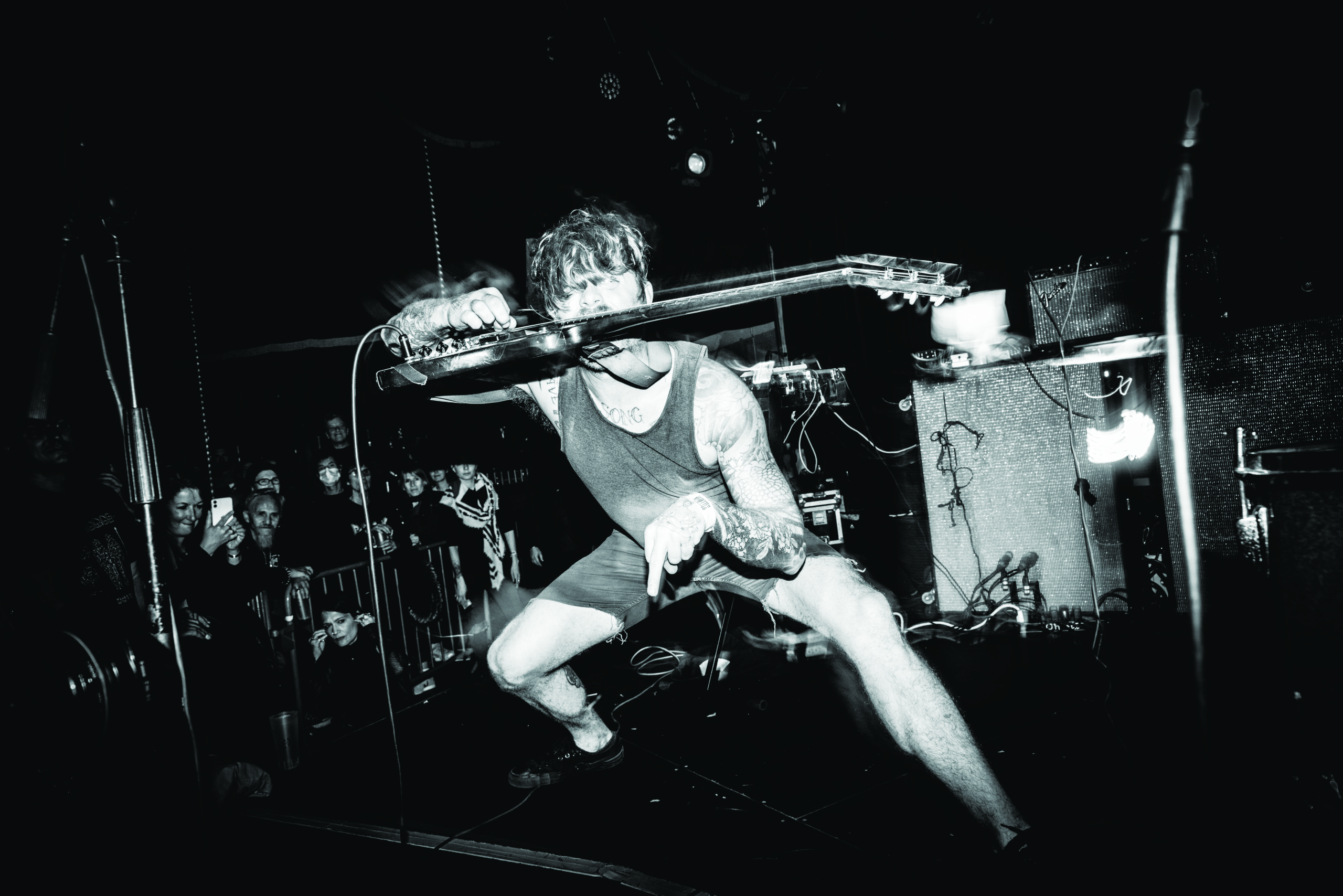 “The more fucked up the world is, the better it is for art,” John Dwyer says. “There’s always plenty of fodder, especially right now—just look at what’s going on in [Ukraine]. A million songs can be written based on the last week alone. Art comes from struggle.”

But Dwyer doesn’t need a fucked-up world to inspire content; he teems with music, so much so that he’s had to form more than a dozen different bands throughout the last 25 years to contain the hundreds of songs that sweat out of him.

Osees is the original, and the center of Dwyer’s musical universe, even with the band’s actual name perpetually in flux. The earliest known iteration of Osees, OCS, is an acronym for either Orinoka Crash Suite or Orange County Sound, depending on Dwyer’s mood. OCS became the Oh Sees, sometimes billed as the Ohsees, and then the Thee Oh Sees moniker was left unchanged for about a decade before the ants in Dwyer’s pants led to the 2020 alteration Osees, which is where it stands—for now.

Osees is a trip inside Dwyer’s head, an extension of influences like Fangoria and Heavy Metal magazines (Dwyer is still a proud subscriber of the latter), and the sonic soup forever in motion. From lo-fi garage rock and psychedelic long-form jams to proto-metal, jazz fusion and straightforward punk, it’s just as hard to classify the Osees as it is for Dwyer to focus on one project at a time. During our conversation, he’s simultaneously overseeing a locksmith, plumber and painter working on what will be the new studio for his longtime label, Castle Face Records, located in Los Angeles’ Eagle Rock area.

The studio, just like most projects that the multi-talented, high-energy musician tackles, has a lot of moving parts—the undertaking is admittingly costly and largescale. Still, Dwyer subscribes to an “If we build it, they will come” philosophy.

“Hopefully, a bunch of people will use this joint at some point,” he says. “My brain is a little scattered.”

Anyone whose mind and body move with the velocity of a cheetah is bound to feel scattered now and again, but the 47-year-old knows no other reality. Over 25 studio albums, a library of self-crafted music videos and the growing roster of musicians on Castle Face Records equate to many 18-hour days. And that doesn’t include Osees’ touring schedule. Even when touring was on hold during the pandemic, the Providence, Rhode Island native says he was more productive than ever. At the top of the list of his accomplishments: Castle Face’s release of Australian post-punk outfit Exek’s new record.

“I was working on so much stuff that my head was up my ass,” Dwyer says. “I read a lot, a lot of YouTube tutorials—learning how to animate—lots of shit like that. Lots of weed smoking. Probably more dope than I ever had [smoked] in my whole life—just bananas. That probably kept me from ending up in a McDonald’s and flipping out.”

The lifetime DIYer didn’t need Covid lockdown as an excuse to do everything he’s always wanted to do. Dwyer’s the kind of dude who doesn’t wait around for someone to show him the way. He just teaches himself.

Dwyer built the Osees’ “Anthemic Aggressor” music video using clay and wood. The result: the cockpit of a spaceship that cruises from galaxy to galaxy as a pair of alien pilots get stoned as they take in the otherworldly wonders of deep space. It’s an ideal aesthetic for a 10-minute psychedelic jam that sounds like Miles Davis’ Bitches Brew making love to Pink Floyd’s Pipers at the Gates of Dawn as early Rush watches in the corner.

The miniature set that Dwyer constructed was auctioned off for $1,000, which went to the nonprofit Elizabeth House, a haven for homeless pregnant women.

“Some lucky kid in Iowa or Ohio has that fucking travesty in his house now!” Dwyer says.

Much of Osees’ more recent work is informed by pioneers of early jazz fusion alongside Miles Davis, including guitarist John Mclaughlin. On Osees’ “Face Stabber,” Dwyer emulates Davis’ extended trumpet riffs from records like The Complete Jack Johnson Sessions. Ironically, Davis approached trumpet like an electric guitar in that era.

Dwyer also used the last couple of years to flex his improvisational muscles and feed that jazz fusion adoration. He released five different improvisational records, under five different band names—Witch Egg and Endless Garbage, to name a couple—featuring tons of talent, including electric pianist Ben Boye, saxophonist Joce Soubrian and, most notably, TV on the Radio’s Kyp Malone, who was in Dwyer’s bands Bent Arcana and Moon Drenched. Again, all these groups came together between 2020 and 2021, except for Bent Arcana.

But does Dwyer ever find time to sleep?

“I sleep like a baby,” he says. “I work mostly during the day; it used to be always at night—probably different choices of drugs. This is my job. So, I’m pretty fortunate. I have a pretty insane work ethic, too—that’s my natural high.”

Next ArticleThings To Do in Santa Cruz: March 9-15