.The Found-Object Menagerie of Peter Koronakos 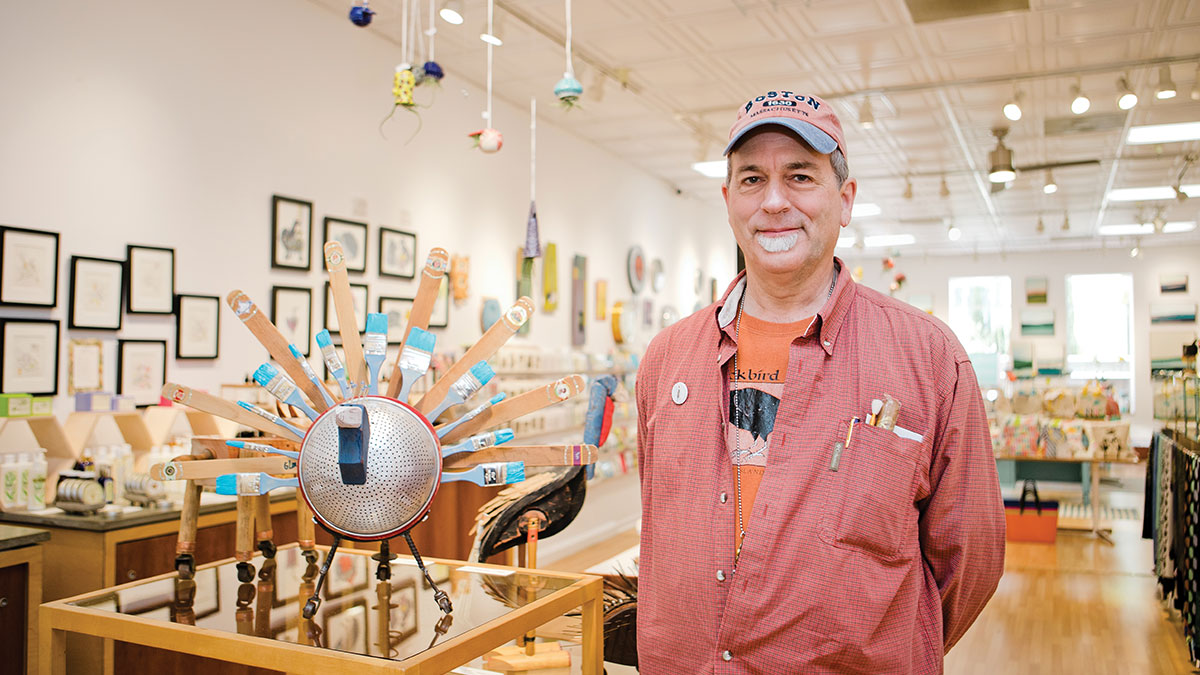 He’s not a hoarder, he says; he’s an assemblage artist who has proudly amassed hoards of pieces to choose from for his work. He uses found objects to create animal sculptures—more than 400 over the course of 12 years. From a badminton racket monkey to a quill-forked porcupine, he breathes new life into old bits and pieces and tops them off with teeth and a fresh pair of eyes.

“I do well with a lot of visual stimuli, so in the studio I have work benches that are just piled with stuff, and when I walk by the material jumps out and tells me what it wants to be,” Koronakos says. “What works best is to have a work table piled with stuff that I may rearrange every month.”

Koronakos says he never gets overwhelmed by the amount of stuff he collects, despite the clutter. He’s inspired by it all, and divides pieces into organizational buckets for easier, quicker use. He currently has more than 70 buckets of potential arms, legs and muzzles in his 300-square-foot Scotts Valley studio.

While the sheer volume of stuff may seem random, his process isn’t. He typically goes to the Skyview Drive-In flea market every Friday morning to treasure hunt for pieces of all shapes and sizes. He gets there early for the best selection, and either has objects in mind or waits for something to pop out at him. People also bring him pieces from estate or garage sales, and he sometimes gets creepier pieces like old dirty crutches or toilet seat brackets. He compares utilization of materials as harvesting or butchery, utilizing all of the materials of a piece. “Like an Eskimo would harvest and process a seal,” he explains.

“It starts with the harvesting of materials,” he says. “Sometimes I’m attracted to something and I don’t really know what animal it is going to go to. It’s just a little tickle that says ‘you should really buy this box of old jars’ or ‘pick up this old interesting piece of wood.’ I’ve learned to go with that and not question it. And, sure enough, further on down the road it’s useful.”

Alongside his animals, Koronakos makes Joseph Cornell-style boxes, which repurpose found objects and trinkets in a box-setting. He also does steel sculptures, fabric art, and photography, but says there’s really not enough time in the day to do everything he’d like. Outside of his artwork, he’s the safety and compliance manager for Roaring Camp Railroads. He says his job allows him first dibs on any old metal or unique wood he finds in the dumpster.

“Roaring Camp has been there for over 50 years,” he says. “There’s a lot of old metal in the soil. When it rains in the winter, there are bits and pieces that become exposed, and I can walk around and collect old stuff.”

Koronakos has participated in the fall Open Studios for 20 years, where locals come to see his work and workshop. His annual show of Oddball Animals showcases 26 animals corresponding to the letters of the alphabet. This year’s show at Artisans Gallery includes a Leafcutter Ant, Meerkat and Zorse (zebra-horse).

Koronakos has reached the point where the amount of stuff coming into his studio is about equivalent to what is going out—a brag-worthy victory for someone with limited space and unlimited ideas.

While some of his sculptures take two days, others may take two years. More recently, Koronakos has been making self-portrait sculptures, which he says is a bit more challenging since he doesn’t have as much freedom compared to a full spectrum of animals.

The first animals Koronakos ever made were a fish out of a bootjack and a pig out of a piece of fencepost. The pig still resides in his bathroom, along with 22 other animals in his house. He will add to his own personal zoo every year, since there are some creations—like a tarantula and gorilla—that he says he just can’t put up for adoption.

“I think I’ll need a bigger place at some point,” he says. “I’m running out of room.”

Next ArticlePreview: Charlie Musselwhite and Ben Harper to Play Catalyst