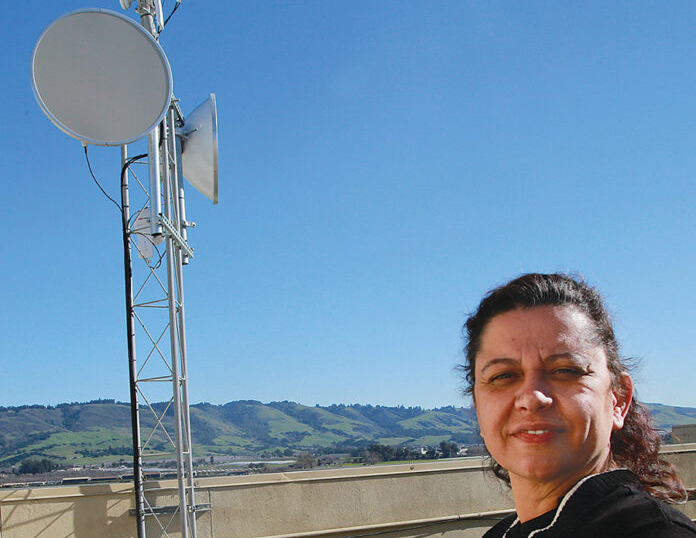 The County of Santa Cruz will soon use a $500,000 grant to install 20 new antennae throughout the county, a plan officials say will boost Broadband internet signals for thousands of people living in rural areas, particularly low-income families.

The money comes from the County’s share of the American Rescue Plan Act, the $1.9 trillion economic stimulus bill signed into law by President Joe Biden last year. Those funds will be matched by up to 150% by Santa Cruz-based Cruzio Internet, said County Spokesman Jason Hoppin.

The funding will be used to increase Cruzio’s Equal Access Santa Cruz program, which has provided access to affordable housing developments and lower-income neighborhoods throughout the county.

Such services have been invaluable to students, who increasingly rely on internet access for their lessons. That need grew exponentially during the distance learning brought on by the Covid-19 pandemic.

More than 700 students have gotten high-speed internet through the Equal Access program, Hoppin said. Once implemented—which County Internet Services Director Tony Batalla said will take one year, an additional 4,000 households will have access to high-speed internet.

The program currently has antennas at 13 locations, each of which serves about 200 households. Participants pay $15 per month for their own antenna to receive the signals, he said.

It is not yet clear where the antennae will be placed. Such an arrangement requires approval by property owners, and then installation, with some sites being more ready than others, Batalla said.

Supervisor Bruce McPherson called the program “very critical” for the areas of the county that have suffered from a dearth of internet service.

“It’s been a big priority of ours for a long time, especially in my Fifth District, given the mountainous areas and the terrain,” he said.

Caput, whose 4th District in South County would be one of the biggest beneficiaries of the expansion, explained that he was skeptical of the deleterious health effects of wireless signals, and the speed at which the program will move.

In making that statement, Caput said he was “sympathetic” to the protests of community members—in particular Marilyn Garrett who for years has spoken at numerous public meetings on the subject.

The Food and Drug Administration has said that there is no proof that the signals cause negative health effects.

“I think it’s too much too fast,” Caput said. “I think really in the future years down the line from now, there probably are some health issues and things like that that are related to high-speed internet.”

Supervisor Ryan Coonerty said that the Covid-19 pandemic has exposed “huge economic divides in our community.”

“Equal Access has been a true partnership and this grant from the County is an invaluable boost to our efforts,” said Cruzio President Peggy Dolgenos. “We are fortunate that our community understands the importance of internet, especially to the generation of local residents now in elementary and high school.”