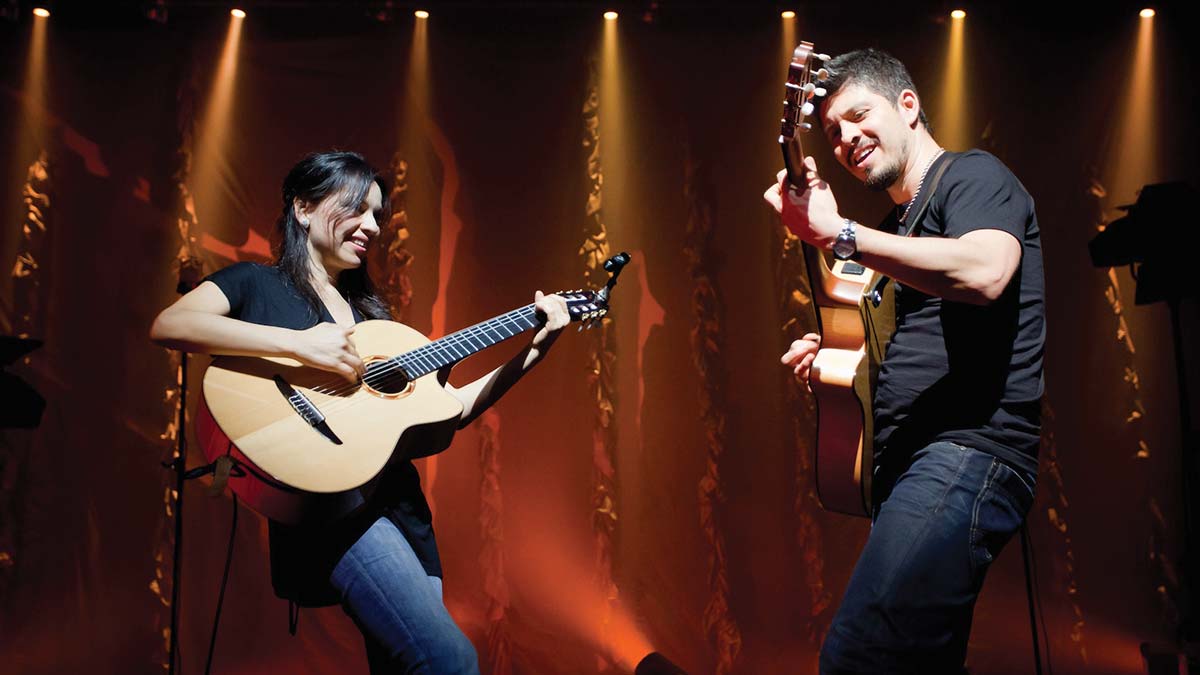 Is it possible to channel the spirit of flamenco guitarist Carlos Montoya and Motorhead’s Lemmy Kilmister, while dancing to your own groove? Rodrigo Sanchez manages to do just that.
Traces of his early love affair with thrash metal are evident in the nuevo flamenco he performs as one half of Mexican guitar duo Rodrigo y Gabriela.
“I used to listen to classic rock: the Beatles, Led Zep, Black Sabbath,” says Sanchez. “Then one day in high school my older brother came up with a copy of Metallica’s Master of Puppets and opened up a whole new world to me.”
Known for their unique blend of heavy metal with traditional Latin guitar and percussive rumba elements, the pair has played Santa Cruz before, back when they used to stay seated during shows. Now they perform their entire set standing, weaving a rich tapestry of sound at mesmerizing speeds. Rodrigo y Gabriela maintain a magnetic chemistry, somehow managing to pull off well-timed dance moves to match their incredible finger pyrotechnics. The nimble guitarists create furious crescendos that blaze through intricate melodies.
Rodrigo and Gabriela Quintero met through their mutual involvement in Mexico City’s underground metal scene in the ’90s. Rejection from music school led them to Dublin in 1999, where they moved to “avoid doing the obvious thing—to get out of our comfort zone,” Sanchez recalls. “We knew nothing about Ireland. A friend mentioned that it was a good place for musicians, but that was all we had to go on.”
Broke and speaking little English, the pair took up busking, which would help shape their unique sound: “Obviously using acoustic guitars rather than electric is a big part of our sound … playing on the street without amplification meant that the style we played was very rhythmic, percussive and full of energy,” Sanchez says.
Their eight years in Dublin resulted in lasting friendships with Irish musicians Damien Rice, Lisa Hannigan and Mundy (a.k.a Edmond Enright), and opened many doors for the duo. Over the next decade, Rodrigo y Gabriela would go on to release five studio albums, three live albums and one EP, in addition to performing for President Obama at the White House and working with composer Hans Zimmer on the Pirates of the Caribbean soundtracks.
Each track on their most recent album, 9 Dead Alive, is dedicated to a significant historical figure, with special attention paid to “themes and causes that are close to our hearts,” Sanchez explains. “I think we are in a position of privilege. We have a global audience who may have discovered us from TV, or the movies, and they might not know about our musical influences, or the historical figures who we think made a difference to the world. If someone listens to Astor Piazzolla or is inspired to find out more about Harriet Tubman and her incredible life, then this can only be a good thing.”
The album’s final track is dedicated to animals and the natural world—Quintero has been a vegan for most of her life, while Sanchez gave up animal products 10 years ago. “For both of us, the vegan lifestyle and animal rights are a huge issue,” he says.
When she’s not touring, Quintero runs a vegan Co-Op in Zihuatanejo, Mexico, where she offers cooking demonstrations to teach the local community about a cruelty-free lifestyle. “The aim is to show that veganism can be accessible to all,” Sanchez says. “People think that [being vegan] is expensive or requires very special preparation, but it’s really just about making simple choices.”
The tremendous amount of concentration required for their live performances are yet another demonstration of the high standards and dedication that permeate Rodrigo y Gabriela’s daily lives. Post-show rituals include plunging their arms into vats of ice water, which they’ve found essential to avoiding injury.
“The show is intense,” Rodrigo says. “It definitely takes a toll on our bodies.”

Next ArticleInside the Documentaries at the Santa Cruz Film Festival