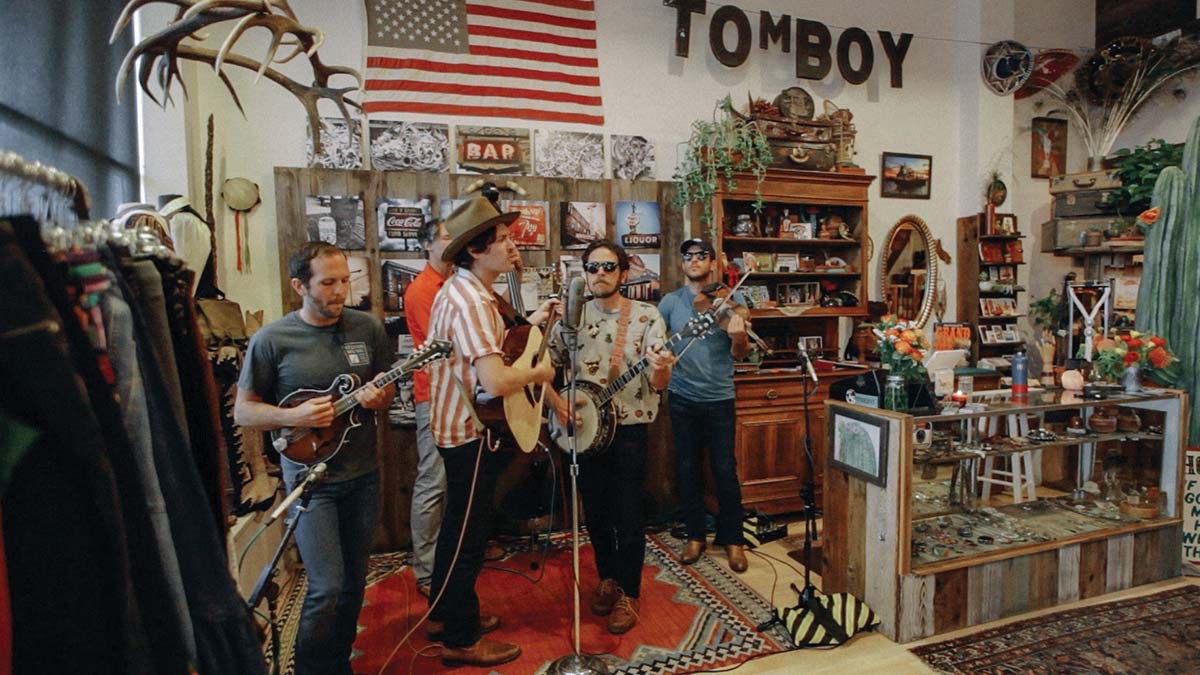 On a recent Friday afternoon in Midtown Santa Cruz, the Soquel Avenue boutique Tomboy transforms into a music video set. Among Western shirts, leather jackets and royal blue cowboy boots are microphones, cameras, a laptop, recording gear, and audio and video technicians. There’s also a handful of enthusiastic friends and supporters, and, of course, the band.
Bay Area roots outfit Brothers Comatose tears through a warmup number in the corner while cameras are set, sound levels checked, and engineers readied. After one take, the band stops to tighten up the ending.
“More fiddle,” someone shouts. “Let’s mic the fiddle.”
The project is the first installment of the Tomboy Sessions, a music video series spearheaded by Mischa Gasch, bass player for California country band Miss Lonely Hearts and founder of TourMore, a roots music booking agency. The seed for the project was planted when Gasch saw a band perform at Tomboy during a First Friday event.
“I thought, ‘They should make a video here,’” says Gasch. “Then I thought, ‘No, we should make videos here.’”
Tomboy is a natural video set. The shop curation is impeccable and the merchandise is the envy of any detail-obsessed American roots enthusiast. In the corner, a few steps from vintage T-shirts, handmade soaps and meticulously folded bandanas just waiting to be put in a back pocket is a wall of perfectly aligned retro photographs by local artist Tommy Brisley that provide the backdrop for the shoot.
To bring the project to life, Gasch teamed up with several top-tier local companies, including Universal Audio, Santa Cruz Guitar Company, Sylvan Music, Santa Cruz Mountain Brewing, Gadgetbox, Seafoam Films, and Tomboy. The team will produce nine videos over the next year, showcasing touring acts as well as standout local artists. They have a wishlist of potential bands, but have not yet released any names beyond Brothers Comatose. The hope is that the project will eventually draw bands to Santa Cruz.
If all goes well, the team would like to see the Tomboy Sessions take off in the way that Jam in the Van, the Gondola Sessions, and other pop-up style video projects have—but with a focus on roots music.
“When I think of a genre, I would say ‘handcrafted music,’” says Gasch, explaining that the styles will range from Americana and bluegrass to folk, country, honky tonk, alt-country and beyond. “It’s related to roots music, but it doesn’t have to be traditional. I like when bands bring in new ideas.”
For Gasch, this is just another chapter in his unlikely story. A 6-foot-something cowboy with a charming and magnetic personality, he is all-in on Western culture. His style of dress, what he listens to, what he plays, and his friendly demeanor capture the best of the Old West. But the fact is, Gasch grew up in Germany where, apparently, there’s a great appreciation of country and rockabilly music. He first discovered country music at the age of 12, and he hasn’t looked back.
“I like to dance to it,” says Gasch. “I wouldn’t call myself a dancer, but I like to dance. I like the melody and simplicity in this music. With the lyrics, it can be so powerful, without too many things that aren’t necessary.”
The Brothers Comatose’s first Tomboy Sessions song is “The Way the West Was Won.” They’re playing it at a hellhound-on-my-trail pace, accented by yips and yeahs. The song showcases the no-frills brilliance of the band, with smooth and lonesome vocals, shredding fiddle, banjo and mandolin, and the thump of an upright bass. The band’s warm, four-part harmonies rise up and bounce around Tomboy’s raw wood rafters.
Watching the band and the video shoot, one gets the distinct impression that Santa Cruz is on the verge of blowing up as a roots music hotbed and that the Tomboy Sessions, along with Gasch’s monthly Western Wednesday gigs at the Crepe Place, will be an anchor for the scene. Gasch would like nothing more than to continue contributing to the local music community.
“I’m really excited being part of the music scene in Santa Cruz,” he says. “Even though it’s a small city, we have something really good going on. I’m excited to be part of building something here.”

For more information and to watch the first video, visit thetomboysessions.com.