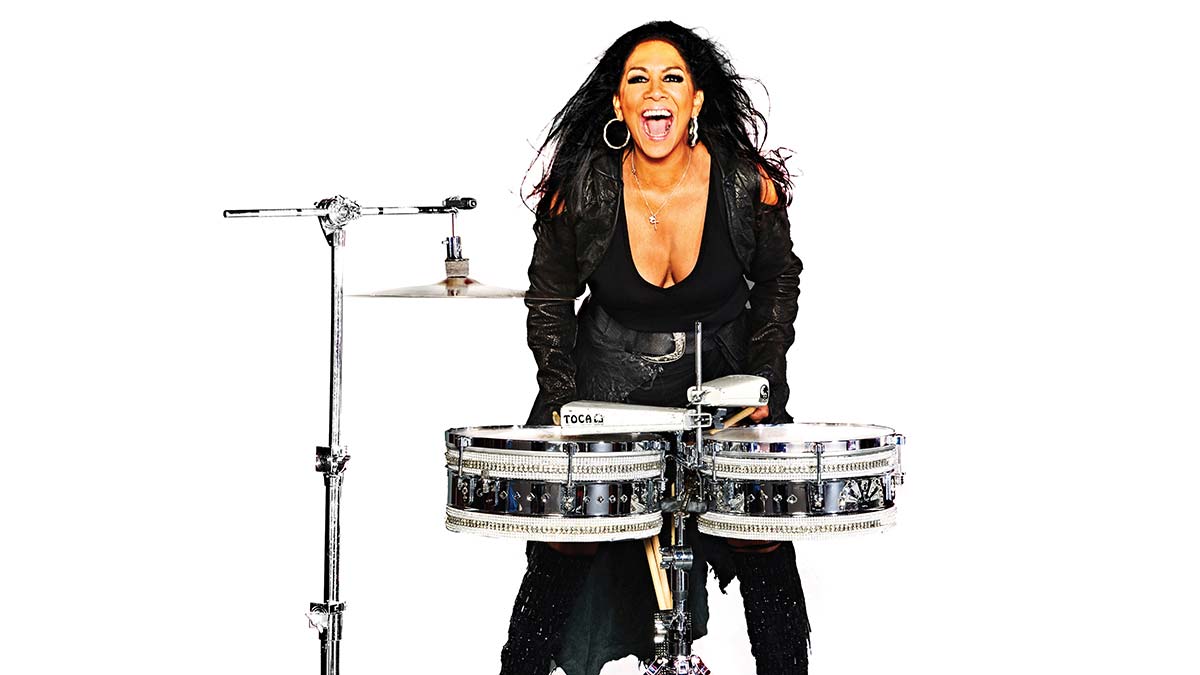 A few years back, I was lucky enough to see Prince when he did one of his spontaneous sets of Bay Area shows. He did two in San Jose and one in Oakland, and I saw all three. At the time, Prince was at the top of the list of musicians I most wanted to see, and I gotta say, he was everything in concert that I hoped he would be.

But the biggest surprise of those shows was Sheila E., who played an opening solo set and also came out to play with Prince. I had grown up with Sheila E. hits like “Glamorous Life” and “A Love Bizarre,” but I wasn’t prepared for the ferocity of her presence onstage or the sheer physicality of her performance—right from the moment she rose out of the floor to start her set, already whirling and pounding on her stand-up drum kit.

A lifelong musical collaborator and former paramour of Prince, she has of course been asked a lot of questions about his tragic death earlier this year. But the best answer she could have given is her new song “Girl Meets Boy,” a haunting, emotional tribute set against a stark melody.

As she prepares for her first-ever “Glamorous Life” cruise—from Miami to Nassau and back over three days in February, with a line-up that includes herself and some of her famous family members, as well as Ozomatli, George Lopez and more—she’ll perform on Sunday, Sept. 18 at the Santa Cruz Mountain Sol Festival at Felton’s Roaring Camp Meadows. The two-day festival features 10 acts, including headliner Edward Sharpe and the Magnetic Zeros on Saturday, Sept. 17, and bill-topper George Clinton with Parliament Funkadelic on Sunday.

Sheila E. is a Bay Area native, whose father Pete Escovedo is beloved throughout Northern California for his contributions to the Latin Jazz scene and whose uncles include singer-songwriter Alejandro Escovedo and pioneering West Coast punker Javier Escovedo of the Zeros. She spoke to GT about her new single, her memories of Prince, and just how crazy she’s willing to get to entertain an audience.

Having seen you live, I can attest that you really know how to make an entrance. Are you going for maximum psychological impact on the audience?

Absolutely. I always try to come up with things that I would look at as a fan and go, “What if they did this, oh my god—that would be amazing!” I really try to top myself, and do something different. At one point on my tour—this is crazy, but I wanted to come out on stage with that jetpack that back in the day, when you first saw James Bond, you’d see him flying. I wanted to do that back in the ’80s! They refused to let me do it. Insurance was going to be like a million dollars. I’m always trying to do something crazy like that.

Along the same lines, during your set you do some amazing drumming tricks that are very visual. Do you plan these things?

I live in that moment, so I have no idea what I do sometimes. I never know what’s going to happen. Sometimes I know I want to do something, and I try to think of things before I get onstage. But sometimes it just happens on the spot; I do something and it’s like “Oh my god, that worked, I gotta do that again!” When you don’t think about it and you just go, things happen.

Most drummers sit behind the set, which obscures the physicality of what they’re doing. But you really put it on display. How did you develop that style?

Growing up, my mom and dad had parties at the house almost every weekend. We just had people in our house all the time. So we were always performing. Back in the day, we were listening to a lot of Motown music and Stevie Wonder and James Brown. We would start dancing and trying to mock what we saw on television. We loved the attention of people either laughing at us or clapping.

I don’t think I’ve seen someone who looked like they were having so much fun drumming. There’s this joy that radiates from the stage when you play.

What you see is how I feel, absolutely. I have a blast. To be able to go on stage and do what I get to do, my god. I make myself laugh, and I make myself smile.

Did other instruments not inspire those same feelings? I’m curious why you gravitated to drums—a rare instrument for a singer to stick with.

I think because my dad played percussion, watching him doing jam sessions and rehearsing and practicing to LPs back in the day. Just being around drums and percussion all the time. But I wasn’t going to be a musician, I wanted to be an athlete. My mom was an athlete, and I just loved competing. Betting and competing—who’s going to be the best, I bet you I’ll beat you—it was always that in the house with all of us, all the time. I think it was in third grade that my dad suggested I play violin. I’m like, violin? But it was awesome, because then I started learning classical music, loved it, and got scholarships to play violin, as well. And then I was running track, and I was training to be in the Olympics at 13. I wanted to win a gold medal, I was breaking records in the Bay Area that hadn’t been broken in 20 years. I was also, at 14, on an undefeated women’s soccer team. I loved sports. And then one day at 15, I played with my dad in San Francisco, I think it was for Mayor Moscone. We played a show in front of 3,000 people. It was his band Azteca, an 18-piece band. Playing like that, with that awesome musicianship, I’d never experienced anything like it. It brought tears to my eyes, my entire body went through every single emotion that you could have, just about. My dad was crying, we hugged and I was like, “I want to go out on tour with you.” Two weeks later, I was flying to Bogotá, Columbia with him, and that was the beginning of my career.

That’s interesting to hear about the competitiveness in your house growing up, because I noticed that when you were onstage with Prince, too. How much did you two push each other as performers?

We basically did that naturally, but sometimes we’d have side bets. Back in the day, we’d bet, and it wasn’t even how well you played—’cause you know, we would always try to compete—but other stuff: playing ping-pong, basketball, pool. Who was the best-dressed. We would bet each other money. I think I was the only woman in his life who would compete with him like that, at that level. That’s why we were such good friends—I stood up to him, he stood up to me.

‘Girl Meets Boy’ is a moving tribute to him. What I like especially is how you stripped it down to simple vocals and piano melody. You made it your own style instead of trying to recreate something that would be recognizably ‘Prince-like.’ What inspired that?

It just kind of happened like that. It started with my guitar player Michael Gabriel—we were in the studio at 1 in the morning, some of the other band members had left, and he said, “I think I have an idea.” I was like, “I think I have an idea? Let’s just put it down.” He got his phone, because he had sung something in his phone, a little melody, like “la la la.” And I was going, “Wait, hold on, let’s just press record.” So he got his guitar, and we wrote it within the hour. I was already singing the words and the lyrics. It happened very quickly. When songs are like that, I love it. They’re few and far between, those kinds of songs—at least for me. But we were still going through emotion, it was late at night. I couldn’t even sing the rest of the song—I put down the idea of it, but I couldn’t stop crying. So I had to wait, and every time I got ready to sing it the next day, I was like “I can’t sing it, I can’t sing it, it’s just too hard.” But by the fourth day I had to sing it, because we were going into two days of rehearsal for BET and I wanted to release it after that performance so that people could understand what we were doing, what’s been happening, what’s on my heart.

Next ArticlePreview: Wayne Hancock to Play the Catalyst