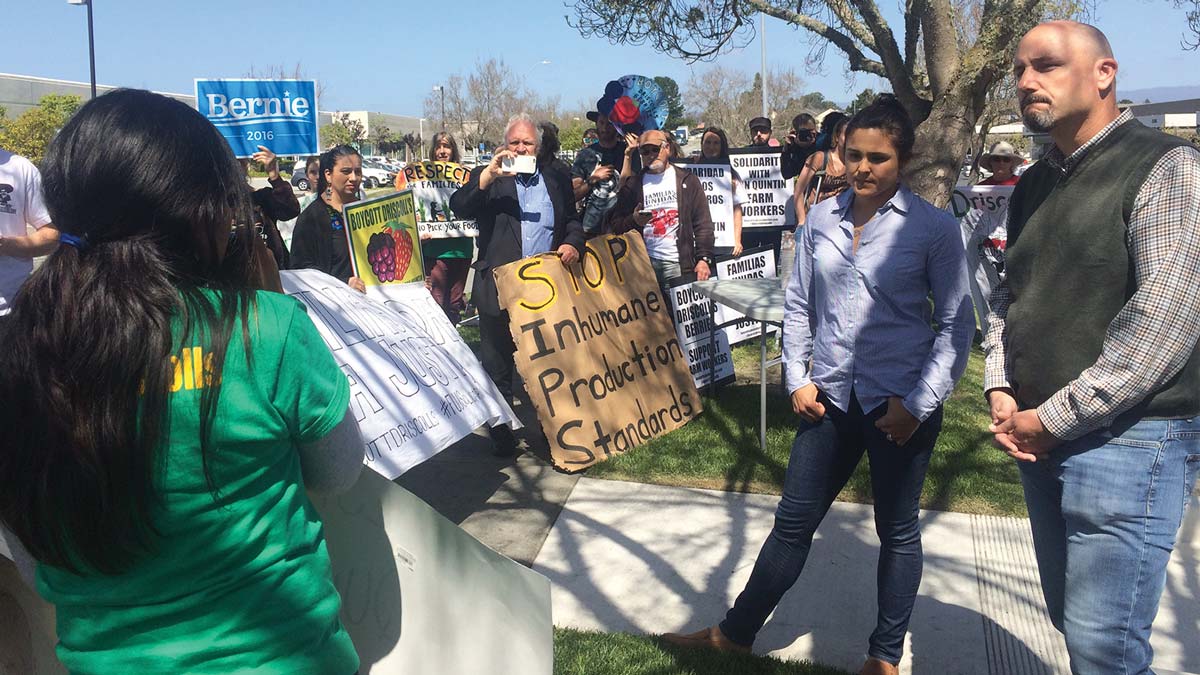 Tatanka Bricca knew Cesar Chavez and Dolores Huerta through United Farm Workers (UFW) more than four decades ago, and helped coordinate a lettuce boycott throughout Northern California. Today, he’s walking across the parking lot for Driscoll’s corporate headquarters in Watsonville at 11:40 a.m. with a cardboard sign that reads “STOP Inhumane Production Standards.”
It’s Thursday, March 31, and Bricca, a 71-year-old Ben Lomond resident, learned about the day’s protest from local organizers and says he felt drawn to it because of the conditions that workers face in the field everyday. Even in 2016, Bricca notes, the average life expectancy of a field worker is 49 years, 24 years shorter than the average American, according to the UFW.
“It’s a living wage. It’s pesticides. It’s all the basic human rights,” says Bricca.
In the distance, chants of “Boycott Driscoll’s!” filter in and grow louder as a group of activists rounds the corner of Westridge Avenue, off Harkins Slough Road.
“Stop the exploitation! We want union contracts!” organizer Ramon Torres shouts at the company’s brown, one-story corporate buildings in front of him a few minutes later. Torres is yelling via translator Andrew Eckels, both of them gripping megaphones.
The rally is for Familias Unidas por la Justicia, an independent farmworker union based in Northern Washington that is calling for a boycott of the nation’s biggest berry supplier. Torres is the union’s leader, and Eckels is one of many volunteers.

The average life expectancy of a field worker is 49 years, 24 years shorter than the average American, according to the United Farm Workers.

Torres tells the crowd that pickers at his former employer Sakuma Brothers Farm, a supplier of Driscoll’s, routinely make less than minimum wage, which  is $9.47 in the state of Washington.
Representatives from both Driscoll’s and Sakuma deny those claims, saying that workers are actually paid above market rates for their work. Sakuma spokesperson Roger Van Oosten says the company’s farmworkers make an average hourly wage of $17.50, and the top pickers often reach $40 an hour at the peak of the harvest.
“You have to pay them well, or they won’t come,” Van Oosten says, noting that there has been a shortage of farmworkers nationwide in the past year. “Why would they bother, unless compensation is high?”
Farmworkers in Washington only have a limited right to organize, Sakuma’s owners don’t have to recognize Familias Unidas, and, for the most part, they don’t. Recognized or not, there is a lot of history between Torres and his old bosses.
Torres was arrested following a domestic violence dispute with his wife in August 2013, while he was living at Sakuma’s farmworker housing. Van Oosten says the company fired him because of the incident, based on both company policy and neighbor complaints. He says Torres’ decision to take his boycott on the road is simply an act of retaliation.
Torres contends that he was really fired for pressuring Sakuma to improve its conditions and that the boycott is solely about what farmworkers go through.
Van Oosten says that Torres’ West Coast tour, which went through Oregon, the Bay Area, the Central Valley, and Los Angeles, does not speak for farmworkers, who he says are happy at Sakuma.
In addition to Torres, the group of protesters includes one current Sakuma farmworker and a handful of supporters. Along their journey, they have opened up not just about their struggles, but about their successes, too. Sakuma farmworkers won an $850,000 settlement in 2014 against their employer for unpaid time, and living conditions were also poor at the time. Soren Bjorn, an executive vice president at Driscoll’s, says that Sakuma’s farmworker housing was also substandard, but stresses that Sakuma has since made big improvements after working with Driscoll’s.
Driscoll’s has a rigorous auditing process, Bjorn explains, for food quality and safety, as well as for worker welfare. “The pay is very, very competitive,” he adds. “It is probably among the very best.”
Bjorn suggests the protests happening now stem mostly from leftover resentment at the conditions in 2013, and Torres would not argue with that.
“Yes, exactly,” Torres says of the fight for better conditions. “And the only way that we can make sure this continues is that we have it under a union contract.”
In Sakuma’s farmworker housing, Torres says that only a few years ago, tenants’ beds were nothing more than torn mattresses sitting on the ground, with cockroaches and rats crawling in and out. When it rained, he explains, all of the cabins would leak.
Without a union contract, Torres fears that bosses will soon start making the same violations they were getting away with before.
He also feels that Driscoll’s is taking credit for the hard work of organizers who brought Sakuma’s violations to light. If Driscoll’s’ audits are so complete, he wonders, how did Sakuma get away with providing poor housing and docking pay for so long?
Torres, who raises money for Familias Unidas through fundraising and selling T-shirts, says he wants to secure health care and retirement plans for the people in the field to give them a better life before it’s too late.
“If we continue this way, you’re only going to live up to 49 years old, because you spend so much energy,” Torres tells GT via an interpreter. “That’s something, with a union, we want to change.”