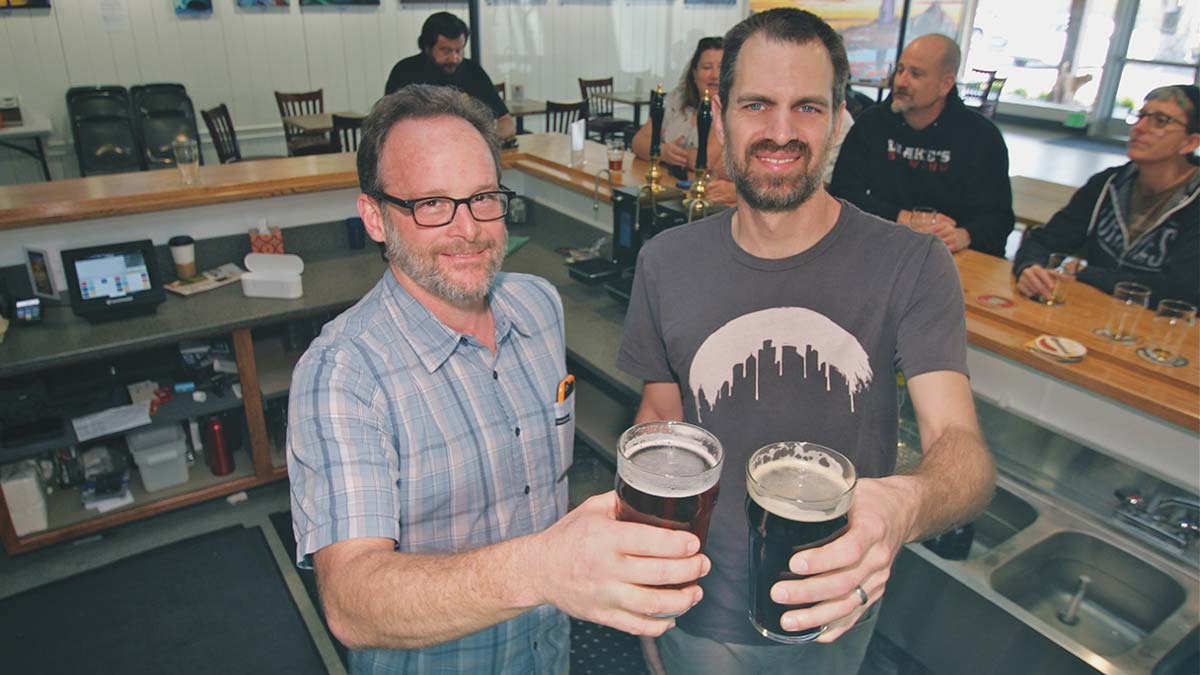 East Cliff Brewing Co., the newest addition to the thriving Santa Cruz craft beer scene, focuses on British-style cask ales, which are probably foreign to anyone who hasn’t crossed the pond. Malty characteristics shine through in these Old World-style ales, and lower alcohol (around 4-5 percent ABV) allows the drinker to enjoy several without feeling too knackered. Naturally carbonated in the cask (hence the moniker), servers pump the ale with the help of shiny, steampunk-esque beer engines.
Co-owner and brewer James Hrica went to England for the first time in 1999, and it was love at first pint. “The way they served their beer was different,” Hrica says. “It’s not ice cold, it’s not super-carbonated. And the taste was different, too. I came to love those flavors.” He was inspired to take up his homebrewing hobby again in an attempt to recreate the British ales he’d experienced, and repeat trips to Britain deepened his appreciation for the style.
In 2012, Hrica and friend and fellow homebrewer Jon Moriconi began brewing together, driven by a desire to recreate the ales they’d fallen for and couldn’t buy in the States. “There has to be something that inspired all that effort. For us, it was the product that we were making. We couldn’t buy it anywhere,” says Hrica.
Less adventurous beer drinkers shouldn’t let fear of the unknown deter them—English styles are very approachable, perhaps even more friendly to untrained palates than the aggressive double IPAs and sour styles now popular on the market. More geeky drinkers will enjoy the results of different malting techniques and the earthy terroir of English hops, which are rarely used in American styles and have their own unique profiles. My favorites are the roasty and nutty English Brown Porter and the mild yet extremely flavorful Burton’s Bounty IPA, dry-hopped with English Fuggles.
The brewery bears little physical resemblance to a dimly lit British pub—the space is open, light and airy. Whitewashed walls set off a dazzling mural of the Harbor Lighthouse done in psychedelic colors by artist Yeshe Jackson. “That pub atmosphere was something we kept in mind,” says Moriconi. “We wanted to build a place where people could spend a few hours with their friends, have a pint or three, and not have to stumble home.”